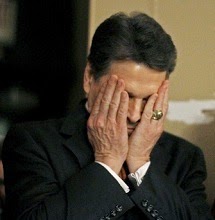 First, a nice encapsulation from the Dallas Morning News, a paper with an editorial policy that usually makes the WSJ editorial page look liberal:

For a long time, Gov. Rick Perry walked too fine a line between politics and policy. It caught up with him Friday.

For months, a grand jury has investigated charges that Perry abused his power by going too far in trying to get Travis County’s Democratic district attorney removed from office.

The DA, Rosemary Lehmberg, pleaded guilty to drunken driving last year, served 45 days in jail and went into treatment. But she refused to resign.

That wasn’t good enough for the governor. He wanted her out, and when she wouldn’t leave, Perry just couldn’t let it go. Instead, he used his veto power to withhold millions of dollars from the state’s public integrity unit, which Lehmberg oversees and which investigates misdeeds of state agencies and officials. Travis County had to stitch together funds to keep the crucial agency operating on a shoestring.

It was a terrible policy decision on Perry’s part, smelling of pettiness and partisanship. Now a Travis County grand jury has decided his action might be a crime.

Actually, you could just stop with the first sentence.  When the DMN turns against you in Texas, you are history.

There's a lot of loose talk already floating around.  David Axelrod, a prominent non-lawyer, tweeted: “Unless he was demonstrably trying to scrap the ethics unit for other than his stated reason, Perry indictment seems pretty sketchy.”  There's also a lot of commentary about DA Lehmberg bringing this indictment; she didn't.  As the DMN editorial put it:

As it is, a special prosecutor and former assistant U.S. attorney from San Antonio brought a case strong enough to get an indictment handed up.

But should Lehmberg have resigned?  That's a question for Travis County voters.  The fact is she didn't (when two other DA's were charged with traffic offenses, including DWI, while Perry was governor, he said and did nothing.  Of course, they were both GOP AG's, and Lehman is a Democrat.  Make of that what you will.), and Perry had no grounds to veto funding for the Public Integrity Unit.

If we want to get into the weeds of this, we need to know what Perry has been charged with:

Abuse of Official Capacity can be a crime if a “public servant (such as the governor) intentionally or knowingly violates a law relating to the public servant’s office” with the “intent to obtain a benefit.” In this case, “benefit” appears to refer to something that can be measured in pecuniary terms, that is, as an amount of money. I doubt Perry stood to gain money from Lehmberg’s resignation, but even that is possible.

Coercion of a Public Servant can occur when a person, using coercion (like threatening to withhold nearly $4 million from a public official’s budget), “attempts to influence a public servant in a specific exercise of his official power or a specific performance of his official duty…or attempts to influence a public servant to violate the public servant’s known legal duty.” There is an exception to this conduct if the the person attempting to do the influencing is a member of a governing body. “Governing body” refers to a legislative body, which does not apply to the governor since he is not a member of any governing body.


And why there was an investigation of the fund at all.  The research fund that generated the controversies that led to this indictment has itself been a hot mess.   Bloomberg has one rundown of it at that link, an article written in February of last year.  In December 2013, a former official with the cancer fund was indicted by a Travis County grand jury.  If the Bloomberg article is not enough in the weeds for you, there is this rundown, too.

And what should not be overlooked is that GOP gubernatorial candidate Greg Abbott has touched this tar baby:

For four years, as questionable grant awards [from the cancer fund] were handed out, Attorney General Greg Abbott did not attend a single meeting of the Board of Directors. He instead sent a staff member who missed about a third of the meetings and, as the San Antonio Express News wrote, “was not much of a presence.”

So as questions mount about what Gov. Perry was doing that got an investigation started in the first place, questions also turn to:  why was the Attorney General asleep at the switch?  As AG, Abbott was a member of the board of the cancer fund (CPRIT).  He never attended a meeting, but instead sent somebody in his place.  Howver, that doesn't remove him from responsibility for knowing what was going on.  Then there's this:

Last December, Abbott’s office announced that it would investigate CPRIT. Abbott is therefore in the position of investigating an agency over which his office already had oversight. As part of this inquiry, the attorney general potentially is looking into the behavior of board members from whom he has accepted campaign contributions.

To complicate matters further, Abbott is investigating the agency’s granting of money to a company that had an Abbott campaign donor as an investor. A law firm representing that company also has served as legal counsel for Abbott’s campaign organization. That same law firm has contributed $160,000 to Abbott’s campaigns since 2001.

In addition, Abbott’s office is representing CPRIT, as legal counsel, in its dispute with a foundation created to raise private funds for the public agency. Among the foundation’s donors are people who also have given money to Abbott’s campaigns.

Abbott, who didn’t grant an interview request but answered numerous written questions, said he sees no problems with these arrangements.

“The Attorney General’s broad responsibility is to enforce and apply the laws of Texas,” he wrote.

“The independent authority to accomplish that fundamental and constitutional task cannot be eroded by legislative appointments to committees.”

Abbott said he doesn’t consider himself to be a member of the oversight committee because he picked a staff member. CPRIT, however, lists Abbott as a member on its website, with a picture of him and an extensive biography.

Abbott may already be wishing Perry had kept his mouth shut.  But it is quite clear this whole thing has very long legs, and a criminal indictment of a sitting governor is going to draw a lot of unwanted attention to a lot of people.

And Perry still doesn't understand that punishing his enemies is not in his best interests:

"This farce of a prosecution will be revealed for what it is," the governor said, "and those responsible will be held accountable."

Update:  Perry's response to these charges is that the Governor can veto what he wants to veto.  But the grand jury indictment doesn't mention the governor's veto, or any facts in this case.  It could well be the criminal case will rest on Perry's public statements about why he vetoed the funding, not the fact that he vetoed it.

If a threat is sufficient act under the statutes, Perry's statements are enough to indict him and possibly to convict him.  The actual veto may be untouchable; the governor's attempts to coerce a public official though, or to force a resignation so he could appoint a successor more to his liking, may well be the crimes here.