Son of Same As It Ever Was 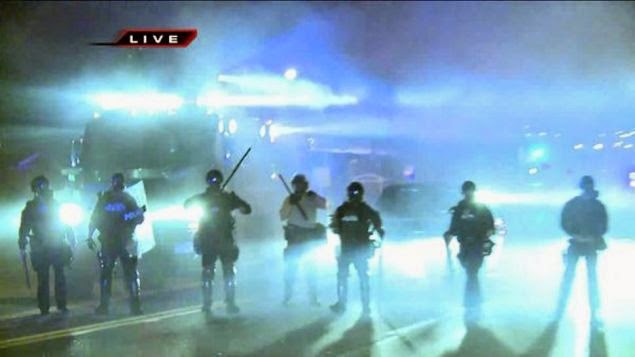 Middle America has conceived by Spielberg

So things are worse in Ferguson, MO because two reporters were arrested and shortly thereafter released.  Which proves, at a minimum, that the Ferguson and St. Louis County police have no idea what they are doing, and have far too much military equipment to do it with.

What it doesn't prove is that the country is collapsing into fascism and we can see that happening right before our eyes.

Welcome to Chicago in 1968, where the police went into a full-scale riot.  Welcome to the 1960's in gneral, where police, as Joan Walsh has pointed out, instigated most of the riots.  This isn't even as bad as the assault on MOVE in Philadelphia, where the police destroyed an entire neighborhood in an act of overkill that still sets the standard for police excess and brutality.

This isn't America becoming worse; this is America same-as-it-ever-was.  The only difference in 50 years is that the police now have SWAT teams and better equipment.  Look at the pictures from the McDonald's last night, and tell me the difference between the police officers and soldiers in Afghanistan.  This is where I came into this movie, except now with more olive green.

And yes, this is indefensible treatment; but now maybe the white people know how the black people of Ferguson feel?  Now maybe it really is that the police are out of control, rather than the citizenry?

ADDING:  my daughter sent me this link, and this seems about right:

I'd like to take this opportunity to remind everyone that so far, the only ones in this situation who have killed someone are THE FUCKING FERGUSON POLICE DEPARTMENT. This is how they respond when their citizens, their own community, stand up and ask them to answer questions about the shooting of an unarmed teenager. Their response is exactly: "Fuck you, don't you dare question our authority." But with guns and armored vehicles and threats and tear gas instead of words. Goddammit.