All others pay cash 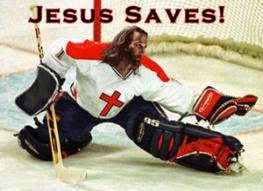 The details of the argument aren't worth worrying about.  But since I saw it at Salon, and it prompts the need to respond, I'll respond here, but only to the titles, not to the idiotic content:

Unlike nationalism, politics, or the internet.  Do you really need examples?

Apparently all religion is Christianity or Judaism?  And what is this obsession with the "Iron Age"?  On-line atheists love that line, like it's the one irrefutable argument against "religion" (which, again, is apparently always Christianity and Judaism.  Although somehow these critiques are not anti-Semitic.  Criticizing Israel's foreign policy is anti-Semitic; declaring the foundational beliefs of Judaism a relic of the Iron Age is not.  Go figure.)

First, I want to hear these atheists decry the basic insights of Aristotle and Plato, not to mention the other foundational ideas of ancient Greece.

Yeah, that's what I thought.

One another note, one thing I learned in seminary is how similar life today is to the nomadic life of the time of Abraham.  The concerns of Moses are the concerns of anyone taking responsibility for a community today.  The tears of the prophets are my tears.  Despite huge cultural and technological differences, people across time and space remain much the same.  That is an insight of wisdom and history, not a dead weight keeping me trapped in the "Iron Age."

Well, no more than Western culture, which is still largely a footnote to Plato, is anyway.

3. Religion makes a virtue out of faith.

I assume by "faith" she means "Believing what you know ain't true."  If so:  hogwash.  Faith is not about believing despite your experience, but believing because of it.  As for "belief," it is only trust (i.e., faith) that makes me take seriously the claims of quantum mechanics, claims based more on mathematics than observation, more on ideas than experiences.  I can barely understand the terms of the theory of relativity, but I accept it as valid.  I cannot begin to prove true any of it's claims, and even the experiments I am told prove it true I have to accept as valid.  I have to trust the reports of them, in other words.  If I don't, does my computer stop working?  If I do, does my computer work any better than it does now?  I've been told quantum mechanics is involved in computer design.  Is this true?  How will I ever know, unless I trust the source of that information?

As Shakespeare understood in "Othello," everything we do is a matter of trust:  whether we trust each other (even Iago, whom we shouldn't), or trust the scientists.  I see some examples of their claims (my computer, for example), but they make far more claims than I can ever see the proof of.  Just as we just trust each other (and to erode that trust, as the story of Othello proves, is to destroy society entirely), we must trust some of what we are told.

Religion doesn't make a virtue of faith.  Faith is a virtue without which our societies cannot function.

Of course, to quote her at length just this once, this is just generalized bullsgeschicte (as we used to say in seminary):

Trust and obey for there’s no other way to be happy in Jesus. So sing children in Sunday schools across America. The Lord works in mysterious ways, pastors tell believers who have been shaken by horrors like brain cancer or a tsunami. Faith is a virtue. As science eats away at territory once held by religion, traditional religious beliefs require greater and greater mental defenses against threatening information. To stay strong, religion trains believers to practice self-deception, shut out contradictory evidence, and trust authorities rather than their own capacity to think. This approach seeps into other parts of life. Government, in particular, becomes a fight between competing ideologies rather than a quest to figure out practical, evidence-based solutions that promote wellbeing.

So now the normal functioning of democracy has gone awry because of something that existed at the time of the American revolution, and was in fact a reason for the founding of some of the colonies?

I don't know where to start with this one.  Apparently churches suck up money that would better go to the United Way or the Red Cross or some charity that doesn't "work... tax free [and] gobble up financial and human capital."  At this point she's just ranting, really.

Or, as Jacques Derrida observed:  "Religion is responsibility, or it is nothing at all."  At this point I'm tired of even arguing with the titles.  Res ipsa loquitor; the thing speaks for itself.

Again, unlike nations, or groups on the internet, or people interested in or involved in politics.   This assertion, in fact, is downright laughable:

In fact, unbeknown to religious practitioners, harming society may actually be part of religion’s survival strategy. In the words of sociologist Phil Zuckerman and researcher Gregory Paul, “Not a single advanced democracy that enjoys benign, progressive socio-economic conditions retains a high level of popular religiosity.” When people feel prosperous and secure the hold of religion weakens.

The usual critique of the church is that it is too wed to the society of which it is a part.  Now we find it is actually parasitic, and destructive of that society!  Damned if you do, or if you don't!  And it explains why Jews are successful in the world!  Because they aren't religious!

Or something.  Yes, I know that kind of joke borders on libel and racist, but Tarico's observation falls over the edge of the absurd.  The charges she makes against "religion" (by which she seems to mean Christianity and/or Islam, in this context) are the arguments used against Jews in Europe for centuries:  their very survival rests on destroying society as we know it.  I don't want to invoke Godwin's Law, but still....

The observation of a sociologist and a researched does not a firm conclusion make; unless, of course, you take their assertions on faith.  As for that last line, it's quite true:  unless you're talking about promoters of the "gospel of wealth" like Joel Osteen and Rick Warren; or the many Pentecostal variants in Central and South America, which are proving more popular than the Roman church at the moment.*

Of course, just what Zuckerman means by "popular religiosity" might also need to come under some scrutiny.  My guess is, it isn't what Ms. Tarico thinks it means.

But "religion" is only in America, isn't it?  And it only refers to Christianity in America; and then only to the caricature that Valerie Tarico is able to imagine, and regard as "real."

*This is the article Ms. Tarico is quoting.   It has found its conclusion, and races to find material to support it (rather than consider alternatives).  Mostly it documents a decline in religious affiliation, which is undeniable, and connects that decline to a rise in atheism (because everything is either/or.  Right?)   It's not a very well-grounded argument and it isn't interested in nuance, only in acceptable conclusions.  It uses the term "popular religiosity" without definition or explanation, except as a club to batter its point across.  And the fact the article is not published in an academic journal tells me a great deal about how carefully the subject is handled.  It is, in other words, worth the paper it is printed on.