"Yet for the powerful to pretend to interpret God's will qualifies as presumptuous." 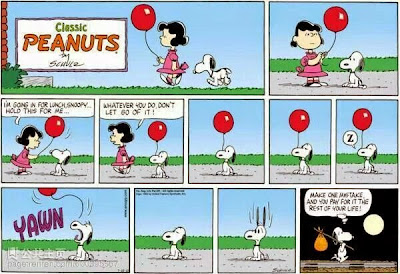 At the root of Niebuhr's thinking lies an appreciation of original sin, which he views as indelible and omnipresent. In a fallen world, power is necessary, otherwise we lie open to the assaults of the predatory. Yet since we too number among the fallen, our own professions of innocence and altruism are necessarily suspect. Power, wrote Niebuhr, "cannot be wielded without guilt, since it is never transcendent over interest." Therefore, any nation wielding great power but lacking self-awareness - never an American strong suit - poses an imminent risk not only to others but to itself. Here lies the statesman's dilemma: You're damned if you do and damned if you don't. To refrain from resisting evil for fear of violating God's laws is irresponsible. Yet for the powerful to pretend to interpret God's will qualifies as presumptuous. To avert evil, action is imperative; so too is self-restraint. Even worthy causes pursued blindly yield morally problematic results.

The Brits do this better than we do.  Niebuhr was thoroughly American, and thoroughly Midwestern, but American literature doesn't do moral ambiguity and the problems of power and guilt and self-awareness of the national character nearly as well as the British do.

Maybe it's that legacy of Shakespeare; sometimes I seriously think it is.  That and the legacy of power, stretching back to the Tudors and through Cromwell and the Restoration and the rise and fall of the largest empire the world has ever seen.  We embrace Roman thinking without realizing our historical debt at all; the British still understand they are an Anglo-Saxon society shaped, down to their Piccadilly Circus and their legal system, by being a far-flung outpost of Rome.

John LeCarre got at this first; the moral ambiguity of spies telling lies in order to serve a greater good.  Reality eventually outran LeCarre's moral imagination.  The Constant Gardener imagined a scandal among multi-national corporations that would erupt if it was revealed how they were treating the sick in Africa, a scandal so worrisome they would kill to keep it quiet; when in reality the truth of such malfeasance was plain for all to see; but the world simply didn't care.

Consider that we are coming up on the 34th anniversary of the deaths of Ita Ford, Dorothy Kazel, Jean Donovan, and Maura Clark. (Corrected per a comment below; I should have had that right the first time!)  I mention it because I heard a promo for a story about it on NPR.  Now that we are nearly 35 years away from the foul deed, it is safe to probe it and consider the outrage of it; safe because nothing can be done about it, no one prosecuted for it, no public figure called to account over it.  Not that anyone has been called to account for it in nearly 35 years, anyway.  A sign of American innocence and wielding power without guilt or self-awareness?  Or just another indication that what happens can always be overlooked, ignored, disregarded, if it suits us to do so?  Especially since, as Marlowe observed, "that was in a foreign country and, besides, the wench is dead."

I've been binge-watching it on Netflix, running through all 10 seasons, roughly 100 episodes.  The plots are often better than Daniel Craig's "Casino Royale" (still the best Bond movie ever made, for my money), and make you wish the writers of "Skyfall" had instead hired the writers from "MI-5," at least as consultants.  "Casino Royale" made Bond deal with the human cost of being a professional spy/assassin ("licensed to kill"); "MI-5" made its characters deal with the moral cost of telling lies for a living, and manipulating people with lies.  When the wife of a villain has been killed in Bond's hotel room in "Casino," he is entirely indifferent to her fate, even though his use of her led both to Bond finding the villain, and her death.  In "MI-5" agents struggle with their willingness to use innocents as resources, and more often than not the people they "handle" wind up dead, or losing a great deal, while the spies retire to their world of government protection of their identities and government sanction of their lies and manipulations.  They do not go gentle into that good night, however.  The strain of the job makes them neurotic; or they quit; or they are forcibly retired.  The human costs are a constant theme of the show.  Indeed, in the final two season, two of the major characters are revealed to have lead mirror lives of lies and indiscretions, one set far worse than the other so that the latter is just an echo of the former.  Still, in a profession of lies and manipulation, the spies on the same side manipulate each other because sometimes three can only keep a secret if two of them are dead; or never knew there was a secret.

It's a British show, so not surprisingly the British come off better than any other nationality.  The Americans, though, come in for special condemnation.  The series started in 2001, so the CIA represents America as cowboys astride the planet backed by money and arrogance, and getting what they want through torture and extraordinary rendition (illegal and immoral acts, in other words).  More than once the operational head of MI-5 has to remind a CIA agent that the latter is on British soil, and subject to British law, that working for the American government does not make one a law unto oneself.  But the agents run contrary to their own government, a government of politicians willing to make deals or shirk promises made to "assets" (the innocents I mentioned above) as it suits them, or as they (more often than note) feel the need, like all politicians, to be liked and to avoid conflict (conflict, as in any action show, often being the best way to resolve a situation).  But the strongest theme in the show is the question of morality, of the ethics of spying and lying and manipulation for Queen and Country.

The last season is the best encapsulation:  the head of MI-5 was, in the past, in Berlin before the wall came down.  He "turned" a Russian, a woman he loved, and with whom he fathered a child.  The plot for the season, the running plot for the entire season, is convoluted and complicated, but in the end our British hero who has blamed himself for what he has done, who has sacrificed almost everything, including his own morality, for the sake of national security, finally unravels the truth.  And the truth is, the woman he loved in Germany, the Russian, was herself a spy, not for him, but for the KGB.  Her husband is a former KGB agent, her son is an FSB (successor to the KGB) agent, who has killed to protect her without knowing she was a triple agent.  It turns out she's working, not for Moscow but for a consortium of former KGB agents.  She has lied to her husband about her status (he thinks she was recruited by MI-5 as a spy; it turns out she was a KGB spy before that, pretending to spy for MI-5, but he never knew).  It is a long untangling of skeins regarding who lies to whom, for what reason, and at what cost.  Ultimately, of course, the British agent is exonerated for his decisions; but his decisions have a cost, not unlike the cost to Bond at the end of "Casino Royale."  But for Bond those costs reflect decisions and actions taken during the course of the movie; for "MI-5," the costs echo down through three decades.

"Make one mistake, you pay for it the rest of your life."  Not in terms of eternal cosmic punishment; but in terms of responsibility; of guilt; of regrets.  No character on "MI-5" wields power:  by lying to manipulate someone; or to protect them; or even using a gun to do either of those, even the power is wielded in the interests of national security or anti-terrorism or simply arresting criminals; without paying a price for that power.  "Power, wrote Niebuhr, 'cannot be wielded without guilt, since it is never transcendent over interest.' "  The British, at least, understand that.  It doesn't make them superior, or wiser, or more authorized to wield power; but it does make them more self-aware.

It's a trait singularly lacking in the CIA agents portrayed in the series.