"Whose life is it anyway?" 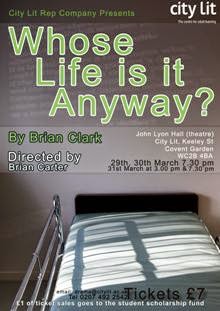 I'm not a fan of either euthanasia or assisted suicide, because I don't think the title question is correctly answered by advocates of either when they say "It is the individual's life!"

That was Ilyich's problem, according to Tolstoy; only in the extremis of death did Ilyich realize the importance of this family, and the importance of life, and the simple fact that we are not in charge, not in control, not in the position to make last determinations; that only in losing what is most important to us, do we finally understand what is most important.  Or:

"Brittany Maynard's gesture is in itself to be condemned, but what happened in her conscience is not for us to know," Ignacio Carrasco de Paula, president of the Pontifical Academy for Life, told ANSA.

"We always choose by seeking what is good, the problem is when we get it wrong," he continued "Conscience is like a sanctuary that cannot be entered. But let's reflect on the fact that if one day the project according to which all patients take their own life were to be fully realised they would be totally abandoned," Carrasco de Paula said.

"Society does not want to shoulder the cost of disease and this risks becoming the solution," he continued. "This woman (took her own life) thinking she would die with dignity, but this is the error, suicide is not a good thing, it is a bad thing because it is saying no to life and to everything it means with respect to our mission in the world and towards those around us," he said, describing assisted suicide as "an absurdity".

"...because it is saying 'no' to life and to everything it means with respect to our mission in the world and towards those around us."  In some environs, that statement is being taken as an arrogant assertion of dominion over others.  I see it as an assertion of life over selfishness, of community over individuality, of love over death.  What is the mission of the individual in the world, according to American secular thinking?  To pursue happiness?  And when you cannot do that any longer, to die with dignity?  Should the chronically poor, then, be assisted in killing themselves so their suffering will end?  No?  Why not?  Why is Brittany Murphy privileged to end her suffering, but the poor are not?  "Tell me, if you know and understand."  The poor are denied life with dignity; why do we deny them death with dignity?  Because death should be denied until it is inevitable, but before it is irreversible?  Or before it is uncomfortable?  Uncomfortable for who?

Whose death is it, anyway?

What is our mission in the world, and to those around us?  Are we sadistic to insist on pain and suffering before death?  Can we not avoid pain, too, and simply die because death is inevitable, and the knowledge of our mortality taints our pleasures?  Can we not involve others in our death, so we can be in control, so death can be comfortable, so we avoid the horrors of natural death or of the death penalty in Oklahoma?

Whose life is it, anyway?

Do we live for those around us, or for ourselves?  Is life our possession, or is life our gift?  Is death our triumph, or is death our conclusion?  Brittany Murphy wanted to be victorious over death.  Or did she?  Is that issue a matter of conscience, or a matter of interpretation?  When we have lost everything of importance, do we discover what is important; or do we find we have merely lost everything?  And how do we know, until it happens?

Aye, there's the rub!  That bourn from which no traveler returns!  So does the assisted suicide embrace death?  Or cheat it?  And is the death singular and sole, and the business of the deceased alone?  Or is it the ultimate choice of life, the ultimate decision in which one chooses for all?  And if it is the choice of one for all, does the decision mean no life is valuable, no one else's life matters, because ultimately yours doesn't?  Or does it mean the value of every life is measured against your own, and if yours can be ended so you can claim "dignity," what are you saying about others?  That their deaths are undignified, or don't matter, either?  What about those around us?  What does our choosing death mean not for, but about, them?

Assisted suicide is an absurdity; and not in the way Camus and Beckett and Sartre meant the term, either.
Posted by Rmj at 4:33 PM