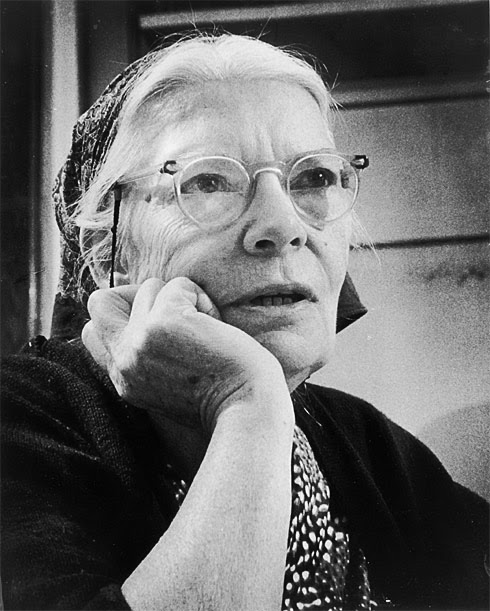 A brother said to an old man:  There are two brothers.  One of them stays in his cell quietly, fasting for six days at a time, and imposing on himself a good deal of discipline, and the other serves the sick.  Which one of them is more acceptable to God?  The old man replied:  Even if the brother who fasts six days were to hang himself by the nose, he could not equal the one who serves the sick.

"ALICE Paul, the suffragist leader, had gold pins made, depicting prison bars, to give to those who went to jail with her in the second decade of this century. Dorothy Day was given one of those pins; but I would bet she did not have it when she died this week. She was not good at owning things. She was good at giving things away, including her-self. It is the only way, finally, to own oneself.

"In her own and this century's teens she was an ardent defender of other people's rights. She continued to speak up for the unprotected when no one else would do that. During World War II, her protests at the internment without due process of Japanese-Americans caused j. Edgar Hoover to open his extensive file on her. Without her, how much bleaker would be our record. She fed the poor, which may not be the Christian's final task, but should normally be the first one.

"She was the long-distance runner of protest in our time, because her agitation was built on serenity, her activism on contemplation, her earthly indignation on unearthly trust. This or that cause, with its noisy followers, came and went, butshe was always there. "Rest in peace," one prays over the dead; but she reposed in restlessness, so long as there was no peace-and her moral discontent should be continued. Let her rest in our disquietude.

"Dorothy Day showed us . . . that people who stand with and for others cannot act from a calculus of individual advantage. They must act as they do from a higher urgency, a love beyond what most of us think of as loving. So far from distracting them from earth's injustice, as Marx claimed religion did, Dorothy Day's faith made effective radicalism not only possible, for many people, but imperative. We may not even be able to possess the earth unless we aspire to heaven-like our sister, who is dead and lives. "

In each of our lives Jesus comes as the bread of life--to be eaten, to be consumed by us.  This is how he loves us.  Then Jesus comes in our human life as the hungry one, the other, hoping to be fed with the bread of our life, our hearts loving, and our hands serving.  In loving and serving, we prove that we have been created in the likeness of God, for God is love and when we love we are like God.  This is what Jesus meant when he said, "Be perfect as your Father in heaven is perfect."

This morning to ward off the noise I have my radio on---Berlioz, Schubert, Chopin, etc.  It is not a distraction, it is a pacifier.  As St. Teresa of Avila said as she grabbed her castanets and started to dance during the hour of recreation in her unheated convent, "One must do something to make life bearable!"

I feel that all families should have the conveniences and comforts which modern living brings and which do simplify life, and give time to read, to study, to think, and to pray.  And to work in the apostolate, too.  But poverty is my vocation, to live as simply and poorly as I can, and never to cease talking and writing of poverty and destitution.  Here and everywhere.  "While there are poor, I am of them.  While men are in prison, I am not free," as Debs said and as we often quote.