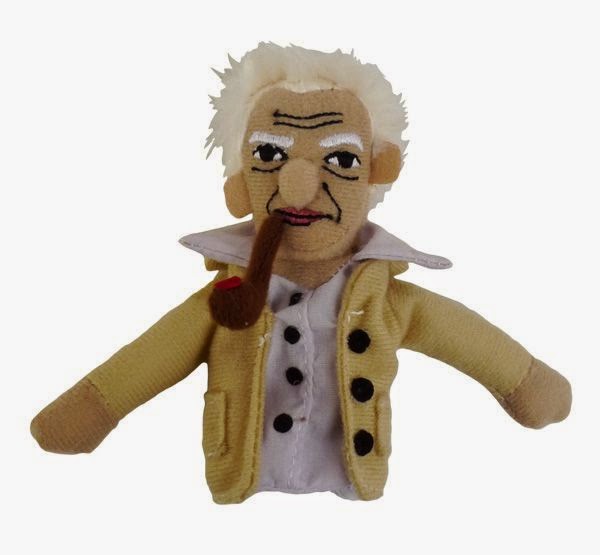 Philosophers are finger puppets, or they are nothing at all.

Some choice words from Karen Armstrong for a Sunday morning meditation:

The religiously articulated state would persecute heretics. They were usually protesting against the social order rather than arguing about theology, and they were seen as a danger to the social order that had to be eliminated. That’s been replaced. Now we persecute our ethnic minorities or fail to give them the same rights.

The middle sentence there encapsulates modern Biblical scholarship on the reason for the crucifixion of Jesus of Nazareth.  Dom Crossan does a brilliant job, in Excavating Jesus, of pointing out the deification of Caesar and how the preaching of the basilea tou theou, especially at the Passover, presented a threat to the Pax Romana that Pilate could not abide.

I’m glad you brought that up, because nationalism is hardly rational. But you know, we need mythology in our lives, because that’s what we are. I agree, we should be as rational as we possibly can, especially when we’re dealing with the fates of our own populations and the fates of other peoples. But we don’t, ever. There are always the stories, the myths we tell ourselves, that enable us to inject some kind of ultimate significance, however hard we try to be rational.

Communism was said to be a more rational way to organize a society, and yet it was based on a complete myth that became psychotic. Similarly, the French revolutionaries were imbued with the spirit of the Enlightenment and erected the goddess of reason on the altar of Notre Dame. But in that same year they started the Reign of Terror, where they publicly beheaded 17,000 men, women and children.

We’re haunted by terrible fears and paranoias. We’re frightened beings. When people are afraid, fear takes over and brings out all kind of irrationality. So, yes, we’re constantly striving to be rational, but we’re not wholly rational beings. Purging isn’t an answer, I think. When you say “purging,” I have visions of some of the catastrophes of the 20th century in which we tried to purge people, and I don’t like that kind of language.

And yet the comments at Salon fail, even refuse, to recognize this simple truth.   You don't have to call what you believe a "mythology."  Ricouer treats them as narratives.  "Mythology," though, has acquired a pejorative cast; it is the favorite word of those who would disparage others, while leaving their myths wholly unexamined and even hidden under a cloth.


Yes. The suicide bomber has been analyzed by Robert Tate of the University of Chicago, who has made a study of every single suicide bombing from 1980 to 2004. He has found that it’s always a response to the invasion of the homeland by a militarily superior power. People feel their space is invaded, and they resort to this kind of action because they can’t compete with the invaders. [Suicide bombing] was a ploy [first] used by the Tamil Tigers, who had no time for religion. Of the many Lebanese bombings [in the 1980s], only seven of them were committed by Muslims, three by Christians. The rest, some 17 or so, were committed by secularists and socialists coming in from Syria.

I think a sense of hopelessness is particularly evident in the suicide bombings of Hamas, where these young people live in refugee camps in Gaza, with really very little hope or very little to look forward to. People who talk to survivors of these actions found that the desire to die a heroic death, to go out in a blaze of glory and at least have some meaning in their lives and be venerated and remembered after their death, was the driving factor.


Even the suicide bomber, in other words, doesn't embrace death.  Rather, they imagine a state in which they will be remembered, a state which they, somehow, will be able to enjoy.  How many of us have such a definite sense of death that we can imagine our own death, or own non-existence?  If we could, would we embrace death so readily, be it as a terrorist, or by self-inflicted suicide?  Is it any coincidence old people aren't as interested in being suicide bombers as young people are?

I think — and I speak as a British person — when I saw the towers fall on September 11, one of the many, many thoughts that went through my head was, “We helped to do this.” The way we split up these states, created these nation-states that ISIS is pulling asunder, showed absolutely no regard for the people concerned. Nationalism was completely alien to the region; they had no understanding of it. The borders were cobbled together with astonishing insouciance and self-interest on the part of the British.

Plus, a major cause of unrest and alienation has always been humiliation. Islam was, before the colonial period, the great world power, rather like the United States today. It was reduced overnight to a dependent bloc and treated by the colonialists with frank disdain. That humiliation has rankled, and it would rankle, I think, here in the States. Supposing in a few decades you are demoted by China, it may not be so pretty here.

Every fundamentalist movement that I’ve studied, in Judaism, Christianity and Islam, is rooted in a profound fear of annihilation.

"Every fundamentalist movement....is rooted in a profound fear of annihilation."  As far as I'm concerned, that's the money quote of the interview.

And this a statement very interesting, in the light of 9/11:

Without a sense of independence and a driving force for innovation, however many skyscrapers and fighter jets you may possess, and computers and technological gadgets, without these qualities you don’t really have the modern spirit. That modern spirit is almost impossible to acquire in countries where modernity has been imposed from outside.


One can see how much easier it is to imagine planes flying into buildings as weapons, when one considers how all encompassing "modernity" is, but only to those who have the "modern spirit."  If you stand outside modernity and see it's products as imposition, as weapons even when they are benign (airliners), it isn't hard to treat them as weapons, even as it amazes the "modern" that you would be so heretical as to do so.  Or, as Wendell Berry put it 13 years ago:

VI. The paramount doctrine of the economic and technological euphoria of recent decades has been that everything depends on innovation. It was understood as desirable, and even necessary, that we should go on and on from one technological innovation to the next, which would cause the economy to "grow" and make everything better and better. This of course implied at every point a hatred of the past, of all things inherited and free. All things superceded in our progress of innovations, whatever their value might have been, were discounted as of no value at all.

VII. We did not anticipate anything like what has now happened. We did not foresee that all our sequence of innovations might be at once overridden by a greater one: the invention of a new kind of war that would turn our previous innovations against us, discovering and exploiting the debits and the dangers that we had ignored. We never considered the possibility that we might be trapped in the webwork of communication and transport that was supposed to make us free.

VIII. Nor did we foresee that the weaponry and the war science that we marketed and taught to the world would become available, not just to recognized national governments, which possess so uncannily the power to legitimate large-scale violence, but also to "rogue nations," dissident or fanatical groups and individuals--whose violence, though never worse than that of nations, is judged by the nations to be illegitimate.


Wendell Berry, In the Presence of Fear: Three Essays for a Changed World, The Orion Society, Great Barrington, MA, 2001, pp. 1-3.

Kierkegaard's critique of Hegel's weltanschaaung suddenly seems even more pertinent to me.  Why?  This, in part:

There has always been this hard edge in modernity. John Locke, apostle of toleration, said the liberal state could under no circumstances tolerate the presence of either Catholics or Muslims. Locke also said that a master had absolute and despotical power over a slave, which included the right to kill him at any time. That was the attitude that we British and French colonists took to the colonies, that these people didn’t have the same rights as us. I hear that same disdain in Sam Harris, and it fills me with a sense of dread and despair.

Oh, it is. We do it with all our foundation texts — you’re always arguing about the Constitution, for example. It’s what we do. Previously, before the modern period, the Quran was never read in isolation. It was always read from the viewpoint of a long tradition of complicated, medieval exegesis which actually reined in simplistic interpretation. That doesn’t apply to these freelancers who read “Islam for Dummies” …

I could as validly say this against the fundamentalists who give Dawkins and Harris such dyspepsia.  The Holy Scriptures of Christians and Jews were never read as literal and ahistorical (i.e., detached from history and floating free in a bubble of the "now," however "now" is defined) until the fundamentalists decided the historical and literary critical readings of the German scholars was a heresy which required a response more than an edict would allow.  The power I find in modern scriptural exegesis is the web of tradition in which it enmeshes me.  Read Bultmann's The Gospel of John, where the footnotes sometimes take over the page.  It is as close to midrash as Christianity gets, and while it isn't for everyone, it shouldn't be tossed out with the baby and the bathwater, as fools like Mike Huckabee do.

Argument is what we do.  But withdrawing into isolation, where only true believers (atheists, or fundamentalists) are allowed to speak and gain credence, is a failure.  It isn't the great failure of the age (fundamentalists, be they religious or atheist, are in the end not that important).  But it is a failure, nonetheless.