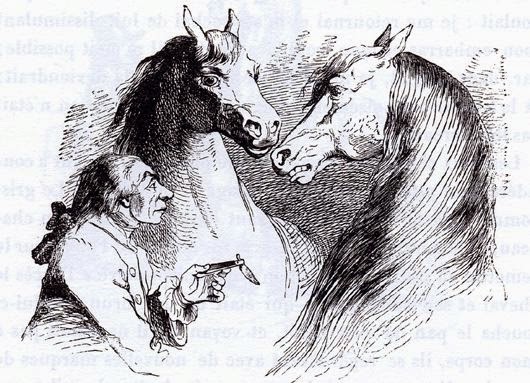 This is why you never argue with fools (something I need to learn over and over again, especially when "some one on the internet is wrong!"):

This is not a fatal flaw in the book, but speaks to its contested place as at once an academic survey as well as an intervention in an ongoing but oversimplified and disheartening “debate.” Armstrong wants to examine, in all its complexity, the relationship of religion and violence, and often does so with great success and insight. She also wants to exonerate “religion,” but that tends to muddy the waters of the first, and more important, goal of this book.

That is the concluding paragraph of a brief review of Karen Armstrong's new book, at Religion Dispatches.   It's a good review, I commend it to your reading.  The "debate" is the one raging among on-line atheists and neo-atheists like Richard Dawkins and Bill Maher about whether or not religion is the source of all evil in the world.  It is a pitifully uninformed debate carried out by people proud of their ignorance of the subject (Dawkins) or simply trying to get attention for their cable TV show (Maher).  This is typical of the debate, and if it sounds almost exactly like Rush Limbaugh excusing his racism or his disdain for "liberals," that's because the form of argument is exactly the same:

Along with despotic governments, irresponsible Western leadership since at least the 19th century, and a rapidly changing world which has thrown everybody into what Alvin Toffler rather charmingly, now, called "future shock."

But mostly, the problem is religion:  because a comedian said so.

There is a relationship between violence and religion, and it does not good to ignore it.  I understand the Bhagavad Gita is presented as a vision that comes in the midst of an epic battle.  The Hebrew and Christian scriptures include many descriptions of violence, both real and imaginary, between Genesis and the Apocalypse to John. And the Koran admits violence as well as peace.  Quelle surprise?  Is human history bereft of violence where religious practices do not exist?  And where, pray tell, is that?

But to even ask that question is to engage in the debate; and I don't want to do that.  It is a pointless debate, going nowhere and meant to go nowhere; because it isn't a debate.  It is an accusation, an insult hurled out in hopes of getting a response to prove, "A-HA!  You see!  They ARE violent!  See how violently they respond?!"

Which was, of course, precisely why Dr. King trained his followers in non-violence.  Funny nobody ever brings up the Civil Rights movement in this context, or the liberation of India by Gandhi.  Dr. King's pastorate is ignored, and we are all told what Gandhi accomplished was only because the British were not Stalin.  Both dismissals are racists and hegemonic in their nature:  no one observes that the Russians are not the Indians (who suffered a great deal for their liberation, and who knows might have suffered more?  They proved no government can govern those who will not cooperate.), because the latter are not deemed European.  And any acknowledgment of the church and the SCLC (the Southern Christian Leadership Conference) in the Civil Rights movement is usually allowed only if you emphasize the community structure the black churches provided to the movement; the spirituality that undergirded that community cannot be acknowledged at all.

Gandhi's fight was spiritual; as was King's.  In the modern world especially, we can only understand the spiritual as the miraculous ("Heaven is real!"), and the miraculous we dismiss out of hand.  But that makes us weaker and simpler than the "medieval" peasants we deems ourselves so superior to.  The problem, for the world, with spiritual movements, is that they rest on humility, and the awesome power of powerlessness:  the one power that truly succeeds in this world.

Which is why the world knows it not; and doesn't want to.