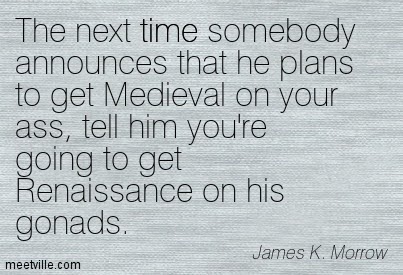 This article in Slate makes several excellent points.  It also has something to do with FoxNews, though the connection is not an obvious one.  First, the article:

Given this context, ISIS’s insistence on an all-or-nothing caliphate isn’t “medieval” at all. It is a thoroughly modern group. It is executing a new and updated version of the early medieval Arab conquests. (In fact, good cases can be made for thinking of ISIS as shaped by Western political thought.)

As long as there have been conflicts among humans, there have been violent, often public, atrocities: the Roman conquest of Dacia (itself storyboarded on the famous Trajan’s Column in Rome), the Crusades, and the Holocaust. ISIS is part of a long tradition of demeaning one’s enemies through decapitation, incineration, disembowelment, and other reprehensible corporal punishments. But ISIS is better at it than almost any group that has come before it because its fighters are master propagandists, videographers, and photographers. They know how to thrust their violence into the mainstream. So, no, ISIS is not medieval. It is viciously modern.

The danger of calling ISIS “medieval” is not that it hurts medievalists’ feelings; it is that it tempts us to define the group’s special barbarism as something from the past that should be eradicated because, by God, we’ve progressed and are therefore advanced as a people. This, as medieval historian and journalist David Perry has recently pointed out, is dangerous thinking induced by the assumption that the Enlightenment fixed everything. (It didn’t.)


I wouldn't so much blame the Enlightenment directly (though it's certainly a contributing factor), I'd say this is a tendency of human nature.  The period after the collapse of Rome and the Renaissance, after all, was named "medieval" and "the Dark Ages" by the Renaissance, in order to make them feel superior in their return to the ideals of the Greeks and Romans (and not all those ideals were worth returning to).  Especially in America, we tend to think the past is a monolithic bloc of fail from which primordial ooze we finally arose about the time the current generation was born.  Our ignorance of the past is vast.  There was a comment at Salon recently averring that the Bible was written at a time when "intelligence" and "literacy" were both punishable by death.  I have no doubt the person who wrote that sincerely believed that to be true.  I also have no doubt their knowledge of history beyond their own personal memories is zilch.  I'd say that was an aberration, an outlier, but I've come across similar ignorance among my students who don't even know the recent history of America (i.e., with my lifetime), or what conditions prevailed here with regard to race, or equality, or even the status of the law (Brown v. Board, Gideon, Miranda, etc.)  The things they fill in those blanks with is little better than that comment about intelligence and literacy.  The hardest part about education is learning the world is not as simple as you think it is.

Back to the Slate article, we find this conclusion:

Revisionist history is a great equalizer of human experiences. That’s part of why it is a grave error to pretend ISIS’s barbarism is somehow foreign, medieval, or special. It is none of those things. It is modern and pressing. ISIS should be held accountable for slaughtering Yazidis, Muslims, Christians, and other so-called apostates. In the meantime, we must become more reflective, more willing to interrogate our shared history. If we do not—if we refuse to confront our own nostalgia—we run the risk of harboring dangerous thinking about our policies toward groups like this and turning every struggle into one between Good (us) and Evil (them).

All this said, Wood’s essay draws out a crucial point: We have to understand ISIS’s rationality in order to deal with it. Its members are rational people. They are shaping the world they consider themselves destined to live (and die) in. This is where apocalyptic thought is important to understand.

I want to add, at this point, this post by my friend Rick.  Not on the topic of the medieval era per se, but relevant to the idea that ISIS is thoroughly modern rather than medieval.  As always in any discussion of history, anachronisms abound.  Rick's post is another example a lucid, informed analysis that the national discourse needs.  More such writing needs to be found on this modern miracle of the internet.  However, the internet hasn't changed the old adage that you can lead a horse to water, but you can't make him think.

I started this post there.  Then I found this article, via NTodd.  It's a succinct analysis of why we don't need to be very afraid of Muslim terrorism.  We are in fact, the article concludes, at greater risk of dying from a falling refrigerator than at the hands of a Muslim terrorist.  The article even points out the number of terrorist acts perpetrated by non-Muslims, thought no one ever labels those actors by their religion (Buddhist, Christian, Jewish, are the examples provided)   But the comments to the article prove that the message has already been received, and if we aren't afraid, then the terrorists have won.

We need to move past this kind of thinking and start attacking Islam directly. The issue is that Islamic people believe that the Koran is the word of god and they believe some of the ideas in the Koran (most but who is counting)..

They believe in something without evidence and do not feel the need to justify its teachings (its the word of God). Even if these Muslims play nice - they are powerless to really condemn the other Muslims who follow the Koran more closely and act more violently. This is because they too are acting on a belief with no evidence and are not justifying these beliefs.

This leads us to our current mess in which all the continents on the planet are battling Islamic aggression. Basically rather then bitching that hey most Islamic people are basically nice - stop attacking us. We need to tell the Muslims - hey stop believing in the stupid rants of a warlord from 100's of years ago..


This is pretty typical of the level of expertise one finds on the internet, in comments or in articles (such as the one that prompted NTodd's post*).  And typical of the understanding of Islam:  it breeds mindless violence, and there's nothing we can do about it except to declare war on Islam.  The moment you say that, though, the comments will scream that no one ever said that and where did you get such a ludicrous idea?  It's a universe as hermetically sealed as the FoxNews bubble, but it seems to contain a larger population than the viewership of FoxNews.

Or maybe it's just that there really aren't that many people on the internet, after all.  At least no more than actually watch FoxNews.

I was actually told, in comments at Salon, that if I put up a blog with cartoons of Mohammed, I would be killed by angry Muslims.  This despite the fact that only a handful of people have actually been killed in the West by terrorists for publishing depictions of the Prophet deemed offensive by someone somewhere, and those people died in one incident after publishing such cartoons for years.  Nevertheless, we are now all in danger because of "Charlie Hebdo."  It's sheer nonsense, of course.  But now because someone is in danger somewhere, we are all in danger everywhere.  Although, of course, we aren't.  I sympathized with the victims of 9/11, and even the entire city of New York; but I never for a moment thought this meant I was going to be next on the hit list.  I'd be more reasonable to be afraid of my refrigerator.

None of the comments at the Slate article, as best I can tell, grapple with anything said in the quoted paragraphs here, any more than the comments at the Daily Beast grapple with the information there.  The reaction is purely reactionary.  The very topic sets off alarm bells, and all the monkeys come out flinging poo.  There is a lot of screaming at a lot of shibboleths that seem to infect the mind of the internet populace at large.  In comments to the Slate article there is an insistence that ISIS is "medieval," with little or no attention paid to the idea that we all revise history to suit our own ends, and do so at our peril; and especially no recognition that ISIS is actually quite rational, which is part of the problem (far easier to define them as irrational and barbaric, keeping a bright line between Us and Them).  And the only thing to understand about apocalyptic thought is that it must be stopped:  with an apocalypse.

I especially like the line about "progress:"  the us v. them argument is fueled by the idea that "we" have "progressed," while "they" remain benighted and backward.  As I've said before, the difference in cruelty between  death from a drone launched missile (which may merely bring the roof down on you, rather than end your existence in the wink of an eye) and a beheading is a minor one.  The real difference is that we don't use violence for recruiting purposes; well, not directly, anyway.  But we both, ISIS and its opponents, use violence to achieve our ends.

I agree we will do better to understand apocalyptic thought than to just damn it; just as I think we're better of understanding fundamentalism than just railing against it.  But frankly, most people hear what they want to hear, and understand what they want to understand.  And it isn't that FoxNews is all that popular or powerful in its own right; it is that we all secretly like the narrative FoxNews deals in.

*Salon, to its credit, has put up a post by a Biblical scholar, a direct response to one of Jeffrey Tayler's unhinged screeds.  It was received as pearls before swine, and far from spurring 900+ comments over several days, disappeared on the day it was posted..  There is actually a lot of wisdom in that casual remark by Jesus; education and even literacy are not enough to make us wise.  It takes a community; and the one brewing on the internet, at least in some small corners, is as ignorant and benighted as any "medieval" society was supposed to be.  Maybe that one goes back to the splinter in your brother's eye that is a reflection of the log in your own.  Which, of course, is a warning to comments like mine.
Posted by Rmj at 8:25 AM