Bonfire of the Inanities 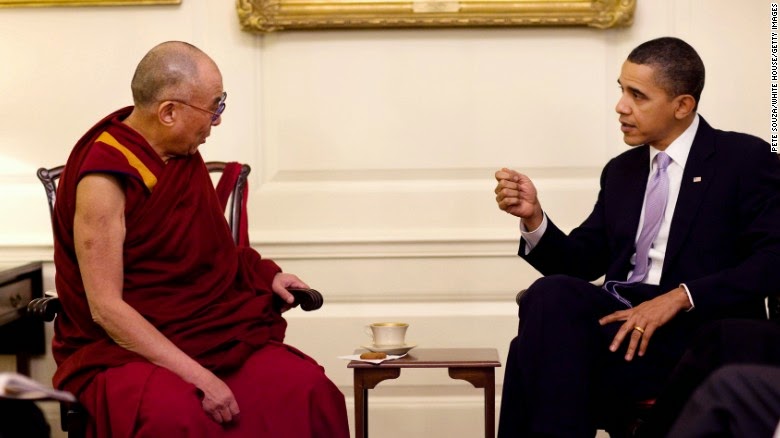 Can you spot the exotic person in this picture?

I have something else in the oven, but oh, what the hell?

Worse, the Prayer Breakfast’s past keynote speakers have included a roster of obscurantist scoundrels, among them Mother Teresa (once denounced by Christopher Hitchens as a “thieving, fanatical Albanian dwarf” for the multifarious, entirely non-beatific controversies bespattering her long career); the evolution-denying, gay-marriage naysayer Dr. Ben Carson, who may seek the Republican nomination for 2016; and British Prime Minister Tony Blair, the sanctimonious “poodle” enabler of Bush’s Iraq War. Actually, not all breakfasters are scoundrels: the Dalai Lama was there this time, and even Jordan’s King Abdullah has visited, thus reminding us that the plague of religion in American public life can be exotic and multi-confessionary.

Hadn't seen that description of Mother Teresa before; but as we will learn, Mr. Tayler has a First Amendment right to be obnoxious and juvenile.   Nice to see even the Dalai Lama is a reminder of "the plague of religion in American public life," and that he's exotic, too!  Edward Said would have had a field day with such "orientalism."  But Tayler would probably consider Said "exotic," too. And I'm not sure I'd consider Buddhism a confessional faith, but never mind.  That's the mildest part of this idiocy.

What, some might ask, could be wrong with prayer? By common definition, prayer entails someone sitting for a quiet moment and beseeching his or her Lord for intervention in matters of grave import – that it rain on the crops or souls be saved, that gays be “healed” or atheists “see the light,” and so on. In objective terms, however, the supplicant is demanding improbable favors from an imaginary despot, and most likely doing so with lowered head and genuflections and other toadying gestures of obeisance — behavior that without faith’s halo would be classified as symptoms of mental derangement. (And all the more so if the petitioner claims to receive answers to the muttered incantations.) This debasing ritual, fruitless and foolish though it may be, is at least usually peaceful, but in some cases (notably in certain corners of the Middle East), rioting and rampaging follow, especially on Friday afternoons, when imams may deliver sermons exciting crowds to fury and frenzy. What’s not to like?


Res ipsa loquitor, as the lawyers say.  And I'm not really sure that identifies either the practice of Christian prayer, or the use of Tibetan Buddhist prayer wheels, just to name two.

Do I really have to explain how benighted this kind of ranting is?  But it turns out the real problem with religion is it's "inutility."  No, I didn't make that word up:  Tayler did.  And still there are comments at Salon that consider this article "eloquent."  The mind reels, and not from the staggering power of Tayler's ideas; but from the sheer emptiness of thought on display:

So, Obama spoke at the Prayer Breakfast, which was bad enough, but what’s worse, not after some visiting head of state or other luminary, but a NASCAR driver, Darrell Waltrip. Subsequent to salutations offering “all praise and honor to God,” Obama paid homage to this driver, wondering if “Darrell has had the same thought as many of us have in our own lives — Jesus, take the wheel. . . . Although I hope that you kept your hands on the wheel when you were thinking that.” (Was this tacit recognition of religion’s inutility?) He voiced gratitude that the assembled could “come together in humility before the Almighty and to be reminded of what it is that we share as children of God.” He confessed that he had “sought His guidance not just in my own life but in the life of our nation.”

From there Tayler rings in the Charlie Hebdo controversy, manages to swipe at multiculturalism (the shibboleth of the right in, what was it, the '90's?), and argues that thanks to the Enlightenment we can be as rude as we wanna be ("The First Amendment contains no proviso regarding insults, let alone excluding them from its protection"; which makes no sense in context, or as an assertion about Constitutional law), and no President can tell us otherwise!  Such heights of peroration are truly inspiring; or just stupid, two conditions that often appear alike on the internet.  But remember, Tayler tells us, ya gotta respect people!

Hallowed ideologies, which is all religions are, do not deserve respect. People do.


Unless those people are Mother Teresa; or the Dalai Lama; or Muslims, evangelicals, or anybody else Tayler thinks deserve to be insulted.  Or maybe insults are a form of respect; it's hard to tell just what Tayler means at this point.  Apparently only certain people deserve respect; the rest deserve only to go away and quit doing whatever it is Tayler doesn't like.

But it's the ending that makes raises it almost to art:

There resides a sad irony in these words. [that we should stand up for the dignity and value of every man, woman, and child]  The best first step toward a future of light and love would be for rationalists to freely espouse their nonbelief and object to locutions that further irrationality.


And if that doesn't work, ban religion!  Because the only way to freedom is oppression of those you think dangerous in their thinking!

We might start, for example, by stating that we are not “children of God” but of the fact of evolution. (Ask any biologist if evolution is “just a theory.”) Poverty and hunger have generally been the concomitants of the God creeds that have done so much to retard human progress.

Realizing the “dignity and value of every woman, and man, and child” is impossible while cringing, cowering and murmuring superstitious gobbledygook in the hope that an invisible — let’s just say forthrightly, inexistent — being will take pity on us and toss us a scrap.

I'll mention that to Dr. King, shall I?  And "inexistent"?  What, "non-existent" was on vacation?

President Obama, your faith is your business. You have every right to practice it, talk of it and advocate it.

But please understand: Speaking as you did at the National Prayer Breakfast, with the eyes of the country and the world upon you, does nothing more than lend credence to faith-fueled forces of reaction, both at home and abroad. With ISIS on the rampage in Iraq and Syria, Islamist violence striking the heart of Europe, and, of course, evangelicals funding much of your political opposition in the United States, the secular, Enlightenment-era civilization from which we all, believers and nonbelievers, benefit, is under threat. We’re on a slippery slope.

Violence done in the name of responding to 9/11 or finding weapons of mass destruction had nothing to do with it?  And because faith is all about fueling violence?  Again:  seriously?

To get off it, we can start by doing one thing: telling the truth.

Do you think Tayler would know the truth if it shook his hand?

As Charlie Pierce might say:  this is your national discourse via the Internet, America.