“I feel like [the arc of history] bends toward chaos" 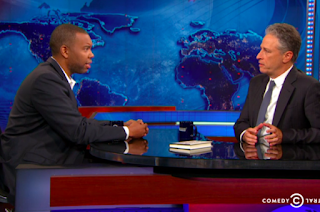 I don't agree with the sentiment, but I wanted to point out it's not just a clever variant on the phrase made famous by Dr. King (and not original to him).  It's also a fine summation of the ancient Greek view of existence.

Nothing wrong with that, either; but it points up a sharp difference between Mr. Coates and Dr. King, probably sharper than Mr. Coates meant.  That difference is Christianity, not to put too fine a point on it.  One of the confessions of Christianity is that the God of Abraham is active in history, and therefore we have hope for the future.

Remove that, and you get a view of history that tends only towards chaos.  It's not an illegitimate view; but it is one predicted by Nietzsche and Sartre, to name two atheists.  If you want to face it that way:  face it.  If you want to argue it that way:  argue it.  Mr. Coates supports it, at least in part, this way:  “And I think the record of history — and human history — is behind me.”

Well, history certainly doesn't show an inexorable movement toward perfection; but towards chaos?

I'm left wondering what history he's talking about; and glad I have at least a different lens through which I see that history.