Whataburger causes me to break my silence 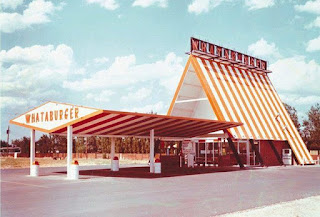 When I moved back to Texas after living in Missouri and then Illinois for 5 years, my then 6 year old daughter was regaled with tales of "Whataburger," which, in my accent and speech patterns, sounded to her like "Waterburger."  She couldn't figure out why I would praise "Waterburger" over McDonalds, especially since "Waterburger" didn't have happy meals.

Oh, they had the equivalent, but I didn't praise it for that reason.

It's not a great hamburger, actually; it's just a really good chain hamburger.  When I was in Illinois, the best substitute was "Steak 'n' Shake," but there's one of those down here now, and I've only been once.  I live within walking distance of a Whataburger (really; the end of my block), and while I don't love it as much as I do Mexican food (which I just call "Food"), I do love it.  For irrational, nostalgic, Texas based reasons.

Even McDonalds, at one point, had to sell a "Texas" hamburger.  Never heard of a Missouri or Illinois hamburger.  Then again, no diner in Texas would serve a hamburger with a bowl of soup.  (if you don't know, don't ask.)

It's just something about 'em.  And now they gain national fame for refusing to allow patrons to carry guns into their restaurants.  For those of you who have never darkened a Whataburger, it's a fast food place much like McDonalds.  Most of them around me shut the "restaurant" down at 10:00 p.m., though the drive up window is open to midnight.  There have been shootings at one near me (not the closest one, but they're like mushrooms after a hard rain around here; they show up everywhere).  I don't blame the workers who want some security when the night drags on and the hour grows late.  I don't blame the customers, either, who don't really want any jackass with a gun to walk in and order a milk shake.  I mean, is that all he wants?

So if need be I will increase my patronage of Whataburger, just to counter any boycott that may ensue.  I don't think it will, really, because while we elect yahoos and ignorami who howl at the moon in D.C. and Austin, generally we do it to get 'em out of town for as long as legally possible.  In the mass, we're a placid bunch who just want to get on with our lives and enjoy our fast food burgers in peace.  And while UT Austin was once famous for students who rode horses to school and packed pistols in the classroom, and our Lege seems to think we want to race back to those days as fast as the laws will let us; by and large, we don't.

Which is why we let establishments decide if they want guns in their place of business.  And why we don't really mind when they say "Thanks all the same; but:  no."

Thanks, Whataburger.  And I'll get some fries with that.....