Not how I wanted to spend my post holiday time.... 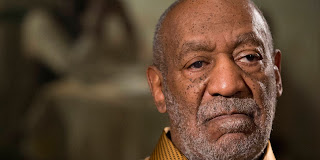 Because I've mentioned the allegations against Bill Cosby before, I should mention this now.  CBS Evening News (I think it was them; the wife had the TV on, she's off for a week, she never watches TV and she likes the news; I gave up TV news a long time ago, I don't recognize anybody who isn't Walter Cronkite.  Seriously.) opened breathlessly with new evidence Cosby was a serial rapist.  This is from the AP account at Salon:

Bill Cosby admitted in a 2005 deposition that he obtained Quaaludes with the intent of giving them to young women he wanted to have sex with. He admitted giving the sedative to at least one woman.

The Associated Press went to court to compel the release of the documents, and they were made public Monday. Cosby’s lawyers had objected on the grounds that it would embarrass their client.

The 77-year-old comedian was testifying under oath in a lawsuit filed by a former Temple University employee. He testified he gave her three half-pills of Benadryl.

That's rather poor reporting:  I had to look it up, but Cosby was born in 1937, making him 67 or 68 at the time of the deposition.  He's 77 now.  Anyway, I dunno, maybe Mr. Cosby is as guilty as sin.  Slipping somebody a Quaalude so you can sleep with them sounds pretty damned sad to me.  Actually giving it to someone is very bad behavior.

I have to be a lawyer, though, and say he didn't admit he raped the person he gave the Quaalude.  Or even that he had sex with her.  Or maybe he did, and the AP didn't include that part of the deposition.  Seems unlikely, but without the deposition, how do we know?  (adding:  see note below, apparently AP did exclude that information, which does surprise me.  But whether the sex was consensual or not is not resolved, even in the material quoted by Deadspin.  There isn't necessarily a difference between  offering a woman a Qaalude and offering her a drink, if by either you intend to lower her inhibitions.)

The article also says he gave the plaintiff in the lawsuit the deposition was taken for, 3 half-pills of Benadryl.  Why, is the question?  That's one reason I pointed out the confusion about Mr. Cosby's age.  Did he give her Benadryl because she had a runny nose?  Did he imagine it was a sedative and would maker her more compliant to his libido?  Was the lawyer trying to prove Cosby used a "rape drug," and all Cosby would admit to was Benadryl?  Was there any evidence of other drugs in her system on the night (presumably night) of the alleged assault?

I ask because this is going to be used to "prove" Cosby is a rapist.  See, he said he gave women drugs!  Yeah, he did.  That can be a foul thing.  But he also admitted to giving one woman, who sued him, an antihistamine, which is a "drug."  And I used to watch TV shows where somebody got "slipped a Mickey Finn."  It was tame enough for prime time, and all it proved was somebody wanted somebody else to be unconscious.  It didn't prove they were a serial rapist.

Cosby admits he bought the Quaaludes.  How many times did he use them?  On whom?  To what result?  And this lawsuit he settled, what did the plaintiff prove in that case?  That Benadryl dried up her nose?

This is tawdry and ugly, but so was Bill Clinton getting blow jobs in the Oval Office and leaving his semen on Monica Lewinsky's dress.  Bill Clinton's actions didn't exactly justify the howling wolf-pack that hounded him through his presidency.  I'm not defending Bill Cosby to wonder if we shouldn't accuse him on the strength of being named "Bill."*

It's as much evidence of being a sex fiend and a liar about sex and even a serial rapist as we have so far.

*I'll be fair, Deadspin has more extensive quotes from a deposition that goes over cases already known in the public domain; cases where Cosby paid money to women he had sex with.  Ironically, better information strengthens my case that we don't know that Cosby is a rapist; we only know he used drugs when he had sex with some women.  Might as well say he used alcohol when he had sex,  to get both parties "in the mood."  You can't assume he used drugs to overpower them, you need evidence that he did, and there is no such evidence in the quotes in the Deadspin article.

All Cosby says in the deposition is that he gave some women Quaaludes and he and the women (on separate occasions) had sex.  This was in the '70's, Quaaludes were a popular drug, it may be he gave the drugs surreptitiously, it may be he gave the drugs because the women accepted them.  Frankly, the lawyer here does a poor job of clarifying that point, he/she could be shredded in court trying to use this deposition to impeach the witness (prove courtroom testimony varied from deposition testimony).  Cosby's lawyer could reasonably argue his client meant the sex and the drug usage were consensual.  Yes, it was illegal; so was (still is) smoking pot.  Doesn't mean people don't do that before they have sex.

You, like the Deadspin writer, may not like Cosby's lawyer's interjections; they are very reasonable to me, in a deposition setting.  Same thing would happen in court, but a judge would decide whether the witness had to answer the questions or not.  A lawyer who didn't object would be committing grave errors on behalf of his/her client.

So, again, who knows?  Was Cosby drugging women to rape them?  Or sharing drugs with them during sexual encounters?  One is criminal, the other was, for better or worse, not uncommon in the '70's (probably not today, either; I don't think alcohol improves libido any more than 'ludes did, but still people use it.)  Was Bill Cosby a sleaze who slept with women?  Well, yeah; but that doesn't prove it was all rape.

This is still a matter of prosecution in the court of public opinion and frankly, no one deserves that fate.  And if you're still wondering why this matters, well:  this is why.