Old times there are best forgotten.... 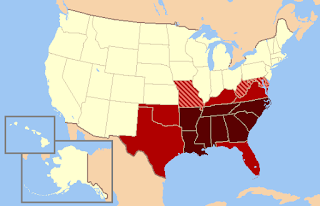 So I heard on the radio yesterday the mention that, in Germany, they put up markers and plaques noting where Jews were killed, or hid, or were housed in ghettos.  The post-Nazi German government and people wish to "never forget," and the public honors go to the victims of the Holocaust, not those who fought and died to defend Nazi Germany.

In America?  Where are the statues to slaves and abolitionists?  Where are the public honors reminding us we have turned our backs on slavery and the horrors it produced for 300 years?  The Third Reich lasted only 12 years, yet Germany is determined to reject all that it stood for, and to honor the victims of that national nightmare.  Slavery in the Americas existed for 300 years, and we put up statutes to the traitors and seditionists who fought that war, claiming they fought for 'state's rights' and the "lost cause" and the "noble traditions" of the South.

Those would be the noble traditions limned in the stories of William Faulkner and Flannery O'Connor.  Or represented in "Django Unchained."  That's the South and the history our statues honor:  the men who thought owning other human beings was an economic necessity and a good worth fighting a war to preserve, worth destroying a nation and a Constitution to maintain.

Those are the people we honor with statues and schools and public parks named for them.  For the slaves, for the abolitionists?  As Charlie Pierce points out, we buried that history as quickly as we could.

The Electoral College controversy would drag on for months, not reaching resolution until almost the eve of the scheduled inauguration on March 5, 1877. To break the deadlock, Congress appointed an Electoral Commission, made up of five Senators, five members of the House of Representatives, and five Supreme Court justices. Congress originally hoped to have seven Republican members of the Commission, seven Democrats, and one independent. As it turned out, however, the actual membership turned out to consist of eight Republicans and seven Democrats. The Commission voted along straight party lines 8 to 7 to accept all of Hayes' electoral votes and reject the Democrat's claims. The night before President Grant's term expired, the Senate announced Hayes had been elected President. The deadlock was broken behind closed doors when Southern Democrats agreed to support Hayes' claim for the Presidency if he would support increased funding for Southern internal improvements and agree to end Reconstruction, thus guaranteeing home rule -- meaning white control -- in the South. Hayes became President and the Southern Democrats could reverse with impunity the gains that blacks had made during Reconstruction.


As Mr. Pierce adds:  "Thus ended the American Civil War. With a victory for the white supremacy that had been crushed on the battlefield."