Of the making of books there is no end.... 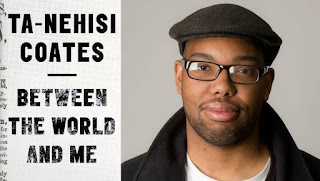 I was going to say I misunderstood Ta-Nehisi Coates because I didn't look at his statement to Jon Stewart in context (a sin of omission I feel very keenly; I like to be careful about context, lest I turn into Alex Jones without the notoriety.  What fresh hell would that be!)

It was somewhere around the middle of the first chapter of Ta-Nehisi Coates’ new book, “Between the World and Me,” where I began to realize that the quintessential atheist and humanist text of my generation, if there could be such a thing, was neither “The God Delusion” by Richard Dawkins nor “The End of Faith” by Sam Harris, nor any number of other worthy contenders by astrophysicists or cognitive scientists or philosophers or by humanist chaplains like me, but this shit right here.


"This shit" being Coates' new book.  What struck me was that the bar for being a "humanist chaplain" at Harvard University is a very low one, as once again we have an atheist obsessed with religious practice ("Ten years ago I gladly signed a contract committing to never pray in public, not even as a metaphor.") and a worshipper at the altar of the dark god "Nollij:" "Yes, as a humanist I like to consider myself a person of knowledge and consciousness."

Gotta say, "consciousness" sounds pretty New Age-y religious-y to me, but then I'm an old guy, my memory stretches back a long way.

Still, the irony is that, while this "humanist chaplain" (chaplain is a religious word, right?) argues that:

Coates was writing of good intentions, at the point where I began to recognize. Americans have good intentions. Few of us see ourselves as wanting to oppress anyone. Most of us pride ourselves on not being racist. But in an era where we are trying to do better than simply not kill people like Sandra Bland, Trayvon Martin or Eric Garner, Coates writes, good intention “is a hall pass through history, a sleeping pill that ensures the Dream.”


He gives no evidence of having done the self-reflective work of any pastor (seminary is nothing if not a challenge to your assumptions, whatever they are.  A good seminary roots them out the way boot camp roots out your individuality and makes you think of your brothers in arms first and foremost.) or, for that matter, any laudable Christian.  Not that all Christians have to do such hard work, but it's the first step if you want to hold yourself out as a chaplain; which is still a religious word, right?

He also gives no evidence of the slightest awareness of Neibuhr's Moral Man and Immoral Society, which is not the only Christian work on society and morality, but it's probably the one most accessible to atheists (and one that has provided insights valuable to sociology, not a field notable for its religious foundations)*.  So I'm forced to ask:  what knowledge does this guy have, except an awareness of avoiding anything that appears to be religious (except his title/office at Harvard)?

I can think of any number of Christian writers, including black liberation theologians, writing about the ease with which we all overlook our ability to oppress others with a whitewash of how good our intentions are.  It's a standard Christian critique going back to 1st century Palestine (or at least to 4th century Augustine).  And frankly with a great deal more internal coherence.

Of course, if the "essential atheist text" of this generation is a work by Dawkins, Harris, or, frankly. Coates; this generation of atheists is in serious intellectual trouble.  The funny thing is, they don't seem to know enough to know that.

*That second quote just sounds to me like kinder, gentler Niebuhr.  And for the record, it was seminary that "woke me up."  I had an excellent professor, an African American, who was passionate about black liberation theology and his own personal stories of being shadowed in department stores and pulled over for DWB; and one of my peers was a black woman with a painful history of racism she made clear to the rest of us, who soon learned how much privilege we had as whites, and didn't even know it.  She learned from us (eventually) that not all whites were as hateful as she wanted to believe (she had her reasons, and her pains); we learned from her how much about being white we took for granted.  I didn't read it in a book; I experienced it.

Experience is a much better teacher of some things.

Where does one go to train as an atheist chaplain?  What educational experience is equivalent to what I learned from my professors and my student peers that wasn't in any book?