"Violence. Is there nothing it can't do?" 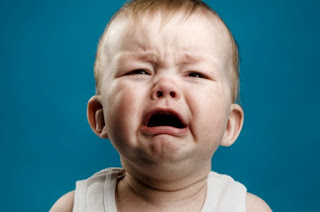 If you are still interested in the crying child in the Portland diner, Rebecca Schuman has absolutely the last word on it* (the comments are as twitter-pated as comments are anywhere on the web, an irony lost on the commenters).

I'm shocked to find out the pancakes at the diner are 14 inches across and 1 inch thick.  I agree with Schuman:  if you can't fix three small pancakes in 10 minutes for one crying (screaming?  Howling?  Again, everyone assumes their worst nightmare to accommodate their conclusion in this story, when nobody knows how obnoxious, or not, the child was) baby you need to get out of the business.  I mean, hell, this is a diner, not a 5 star Michelin restaurant known for its resplendent American breakfasts!  And even then, what kind of restaurant can't bend to serve its customers?

Schuman sums up nicely (no, the parent shouldn't have ranted on Facebook because, yes, a nameless rabble is reading EVERYTHING on the Internet, and "going viral" has a connotation of "diseased and out of control" for a reason!):

Everyone in the interminable debate about children in public is right enough—everyone except the Internet. For every parent who lets the kid jump up and down on ketchup packets and shove recently-shorn fish skin into unsuspecting diners’ faces (this happened to me when I was seven months pregnant, and boy did I judge), there are 10 who are really and sincerely doing their goddamned best. But the Internet doesn’t care. The Internet, and everyone on it (myself included), wants to pounce on teeny-tiny tyrants and their torrents of terror, and then use those moments—arguably low points in the lives of everyone involved—to invoke yet another dumb conversation that has no détente and goes on for time immemorial.

Actually, the internet wants to pounce on anything to invoke not conversation but screaming, where detente isn't even an option and nothing ever dies because it is in a timeless present until the next viral thing comes along and becomes the present.

A cautionary tale for us all, I suppose.

*I think she sums up the known facts a bit too much in favor of the diner owner but call me Rumpole.