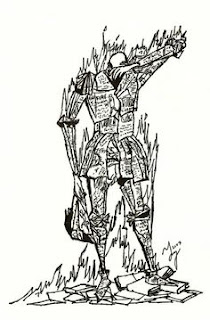 This makes me think I should re-investigate Ricouer on narrative:

It’s unfortunate that Black Cindy’s narrative is unique, but in the world of prestige dramas and comedies, religion or acts of worship are usually presented as things outside of intellectuality or artistic expression. “The Good Wife” has done an excellent job of critiquing the public perception of atheism with Julianna Margulies’ Alicia Florrick. In Season 6, although she does not struggle with her beliefs, there are some interesting complications along the way (especially because she’s running for public office). Alicia’s atheism fits well with her character—she’s analytical, smart and a realist.
She believes in the law and is concerned primarily with its execution, as opposed to issues of faith.

Although religion was never a topic that became a major part of the series (which is telling in and of itself), we saw similar oppositions between faith and intellect (or faith and work) on “Mad Men.”

Peggy Olson’s character (played by Elisabeth Moss) was responsible for the few storylines concerned with religion, and she was set in direct opposition against her Catholic mother and sister. Her relationship with Father Gill in Season 2 seemed to work against these oppositions at times, but for the duration of the series they mostly stayed in place. In Season 3 “Mad Men” also gave us this memorable exchange between Sally Draper and Betty:

Sally: Why don’t we go to church?

Betty: We go to church.

Betty: We don’t need to go every week.

The issue of class not-so-subtly creeps into the dialogue here, as Sally is asking about their black nanny and maid. It’s implied that she’s someone who needs church, while the Draper family can afford to attend just once a year.

Perhaps the best “Mad Men” example might be the [failed] relationship between Don Draper and Rachel Menken. One of the most emotional scenes of the final season saw Draper attending her shiva. Her Jewish background was always a point of interest, but because the character was not a series regular, we saw her more as Don’s lover—the one who got away—rather than a character for whom religion was important.


If the thesis isn't clear there, it was stated explicitly a bit earlier:

Bob Dylan would say we’re all gonna have to serve somebody, but Black Cindy’s storyline suggests that how we worship and believe is as important as what or whom we worship. And when her Afro Puffs went kosher, so to speak, “OITNB” brought us the type of religious conversion narrative rarely, if ever, seen on television.


I suppose we could focus on the irony that Bob Dylan is a Jew who converted to Christianity (a long time back, if the stories are true), but for the article, the thesis is that "issues of religion" are matters of worship and belief.  Religion is about how you spend some portion of your week (in worship) and what you believe in.

Black Cindy: Honestly? I think I found my people. I was raised in a church where I was told to believe and pray. And if I was bad, I’d go to hell. If I was good, I’d go to heaven. If I asked Jesus, he’d forgive me, and that was that. And here, y’all sayin’ it ain’t no hell. Ain’t sure about heaven. And if you do something wrong, you got to figure it out yourself. And as far as God is concerned, it’s yo’ job to keep askin’ questions, and to keep learnin’ and to keep arguing. It’s like a verb. It’s like—you do God. And it’s a lot of work, but I think I’m in.

There's something of Kathleen Norris in there, and of religious people taking their religion seriously enough to devote their lives to it, as nuns and monks and priests; but then again, not really.  The point of religious belief is not to center your life on arguing with God, either, even if you meditate deeply on the idea that "Israel" means "struggles with God."  If that's all you're doing, you're still a non-believer struggling with some very simplistic idea of the notion of "belief."  Which is not what the Drapers do; or Peggy Olson; or Alicia Florrick.

But it's the narrative of what believers are supposed to be doing.  On the other hand, does anybody have a narrative where they imagine Pope Francis doing this all day? Or Sr. Simone Campbell? Or should we better start with Ricouer?

On the other hand, the relation between these two hermenuetics begins to reverse itself once we begin to consider the other side of the narrative, namely, the confession of faith. But this other dimension remains inseperable from the structure of the story. Not just any theology whatsoever can be tied to the narrative form, but only a theology that proclaims Yahweh to be the grand actor of a history of deliverance. Without a doubt it is this point that forms the greatest contrast between the God of Israel and the God of Greek philosophy. The theology of traditions knows nothing of concepts of cause, foundation, or essence. It speaks of God in accord with the historical drama, instituted by the acts of deliverance reported in the story. This manner of speaking of God is no less meaningful than that of the Greeks. It is a theology homogenous with the narrative structure itself, a theology in the form of Heilsgeschicte.

The narrative of the confession of faith is not a narrative of how religious believers explain themselves to non-believers.  The frame of the narrative presumed in the Salon article is that all believers are deeply concerned with the question of belief, with the validity of belief, with even the facticity of God.  But that's a modern obsession, a non-believer's obsession, even an atheist's obsession (whose source of identity, as an atheist, is in being opposed to the belief of the theist, a curious attempt to be yang to their yin; the atheist thus needs the believer; the believer doesn't need the atheist.).  But the confession of faith is not a confession of a proof of God's existence, or a conclusion as to all the important questions of life (that much Black Cindy and I can already agree on).

To the world, the accepted narrative of faith is that only atheists are concerned with matters like the law and its execution; which surprises at least this Christian lawyer, and many other Christian and Jewish and Muslim lawyers I've known.  The stories Ricouer speaks of are the powerful stories often encountered in spirituals (Thought Criminal has run a series on spirituals; you should look at them), or in both the abolitionist movement and the Civil Rights movement.  Those stories are still the backbone of the "black church" experience in America.  They don't have a lot to do with the validity of worship or the existence of God; they have a lot more to do with issues related to the law and its execution.

Consult the writings of Dr. King, for more information.

This is the box popular culture wants to squeeze religion into; squeeze it in and declare it defined and relegated.  Not that evangelicalism and fundamentalism haven't worked hard to make that narrative the dominant narrative of religion in America.  In an excellent article at Religion Dispatches the reduction of Christianity to a never ending cycle of sin, repentance, forgiveness, and redemption is discussed in terms of Billy Graham's grandson, who confessed to an extra-marital affair.  If you're old enough to remember Jimmy Swaggart sobbing out his confession, you know the routine.  If you grew up around the "revivalist" culture of the South, you know this is the backbone of southern Christianity in almost all it's varied forms.  And yes, it's pretty thin gruel and a pretty shallow pool, and the reason I saw, 20 years ago now, such pastors announcing to each other they'd discovered something new to revive worship in December:  Advent.

Maybe Christianity really is just all about worship.  One can be forgiven for thinking so when revivals are a central part of one's worship life; when altar calls are the central ceremony of public confession, repentance, forgiveness, and redemption.  I didn't grow up in that church culture, even among my grandparents and their friends in the Primitive Baptist church, but I grew up amongst it and I know its contours fairly well.  The old joke was that we got all the Baptists sobered up enough of Sunday morning to get 'em to church to ask forgiveness for what they did on Saturday night; and that was pretty much what being a Southern Baptist meant.  My grandparents, on the other hand, were poor people among poor people who brought food every Sunday, sang from shaped-note hymnals because they wouldn't use even a piano, listened to lay preachers like my grandfather, shared a generous meal after every worship service, and called each other "Brother Madison" and Sister Lenore," and it meant they were family because they were one in the spirit and one in the Lord.  And if they struggled, they struggled with how to live up to what God meant to them, and what God's word meant.  They didn't go to church every Sunday because they needed to; they went because they wanted to.  They went because that's where the family would be, and they wanted to be among them.

I attended a black church once, in seminary.  It was an assignment, a push to expose us to as many forms of Christian worship as we could find.  It was the only church service I've ever attended where the pastor had to take the microphone and urge people to leave, so the next group of worshippers could get in, and the next service start on time.  Nobody watched the clock during worship, and nobody was anxious to leave the company of the others when it was done.

Neither of those narratives show up in the stories of the Drapers or the Catholic church of Peggy Olson, or even in the Judaism of Rachel Mencken or Black Cindy.  That's all right, of course, they don't have to.  But we take literary representations as either distillations of a hard-found truth (the initial comments at Salon disparage the author's opening linking a mere "TV show" to the literary efforts of James Joyce or John Milton, as if one can only sully the purity, the holiness, of the other), or as fair representations of how the world "really is."  And much as I enjoy "Mad Men" and admire Matthew Weiner's use of religion in his story-telling (especially the episode that focusses on Holy Week and Easter at Peggy's church), "Mad Men" doesn't represent anything beyond the stories of those characters.

There is a narrative we cannot, dare not, challenge.  Once it is settled upon (and it is settled upon quickly, in almost any new story that comes along), it is assumed as true and solid as the ground we walk on, as the houses we live in, and not even flood and fire and wind can destroy it fully.  But the narratives about faith don't even begin to consider the narrative of the confession of faith (except as a confession to never think again).  And that is, at the least, a disservice to the world we live in, even as we become more and more determined to live in it through the lens (!) of the narratives we see on screens, the constantly flickering screens that are making the future more and more like the one Ray Bradbury imagined in Fahrenheit 451 and "The Pedestrian," every day.