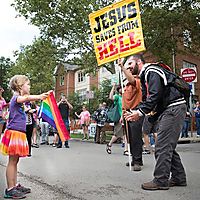 Because I wanted an excuse to link to NTodd's piece....

And whatever you can say about the county clerks of Texas, they're none of them as crazy as this:

Jesus Christ is Lord of all. He came to save the world by His death and resurrection. That world includes you, me, the family, the civil government, all the institutions of life. He came to advance His Father's kingdom, not watch man run rampant upon the earth as if Christ had never come. As if it were the days of Noah!

The criminal laws against homosexual sodomy are for the protection of the righteous, particularly the young, the weak, the vulnerable, who need the law to teach them right from wrong when in a vulnerable state. The U.S. Supreme Court, although it claims to have done so in 2003, cannot take something that God calls a crime and declare it not a crime.


We're facing something even worse now, the civil government taking a new step and actually requiring the approval and sanctifying by the state of an evil behavior. Five justices on the U.S. Supreme Court have now opined that the States of this country and all of us must approve of so-called marriages of same sex couples.


"I must follow the law," you say. Law? What law? There is no law anymore, there's just opinion. One day this, one day that. When the law becomes merely the opinion of a handful of people on the courts, there is no longer any law. There is tyranny. There is chaos. But there is no law.

The young and the weak, those that are caused to stumble by courts that approve of what is evil, are those whom Jesus referred to when he said, "It were better for him that a millstone were hanged about his neck, and he cast into the sea, than that he should offend one of these little ones." Luke 17:2. You don't want to be complicit in allowing such stumbling blocks.

Don't use the Nazi war-crimes trial defense: "My superiors (or the courts) told me to do it." You're not standing for the rule of law when you capitulate to a law that defies God and exposes people to the wicked. You're just a coward making excuses!


Or will your conscience cause you to resign? Why would you leave the people of this State, their children, your children and grandchildren to the wolves, those who would rend the society apart with their denial of what's good and evil?

Your duty is to stand against the ravages of a superior authority that would go beyond its rightful power and force upon the people something evil. That's what the founders of our country did when Parliament exceeded its powers. That's what the Puritans in civil government in the 1600's did when the King exceeded his powers.

On Judgment Day, you won't stand in front of the media, the advocates of "Equality," or even the federal courts; you'll stand before the King of Kings, the Judge and Ruler over the Kings of the Earth, Jesus Christ. His law is not subject to the vote of man, and He, asthe good and loving author of that law, does not exempt any nation from it. The law's author, speaking of Himself as "the stone which the builders rejected," said, "Whosoever shall fall upon that stone shall be broken; but on whomsoever it shall fall, it will grind him to powder." Luke 20:18.

What can you do? You have authority as an elected official. You also are sworn to uphold the U.S. Constitution and Alabama Constitution. Find a way to do so. Don't acquiesce to the takeover (actually the takedown)! Use your authority and every legal angle to oppose the tyrants! If necessary, just say, "No." It is not rebellion for you to say, "Your interpretation of the Constitution is wrong, beyond your authority, and detrimental to this nation." In fact, it's your duty. You're not opposing the rule of law, you're upholding it by saying that.


I had to quote the whole thing to show how batshit crazy it truly is.  This is the work of the director of the legal staff of the Alabama Administration of Courts (hat tip to trex in comments below for putting me on to this), Mr. Wim Johnson.  He sent it to the legal counsel to the Governor of Alabama.

Soteriologically (which is to say, theologically, but specifically with regard to ideas about salvation) it's a quagmire.  You don't even have to get there, though (for some reason that always makes people uncomfortable, especially people who've grown up in Baptist saturated cultures), to note the problems of the 1st Amendment against this "analysis."  Exegetically (the Biblical references), it's a joke.  Historically, it's laughable.  This hits all the marks: Bible-thumping wannabe preacher of hellfire and damnation; Godwin's Law (which, let's face it, has it's applications), and "Just say no to tyranny!", always an American favorite, because "tyranny" always means replacing it with another kind of tyranny.

Anybody want to live under this guy's vision for government?  And, again, for those of us old enough to remember the '60's of the civil rights movement, does this screed sound any different because it's directed against sexual orientation, than it did when it was directed against race?

As for Mr. Johnson's challenge about the questions to be asked on judgment day, the Gospel of Matthew is quite clear on the matter, and the question that will come from Mr. Johnson's lips, be he a good man or one about to be cast into the outer darkness, will be:  "Lord, when did we see you?"

I don't know about Mr. Johnson, but that question always keeps me a bit humble.*

*Probably not a major concern for Mr. Johnson.  Religion Dispatches tells me this comes from "Christian Reconstruction," an arch-Calvinist school of theology.