"Pray without ceasing."--Paul of Tarsus 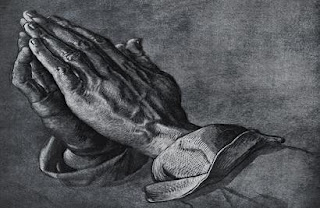 Russell Moore told Linda Wertheimer, almost wholly in passing, that the current contretemps about "thoughts and prayers" for the victims of the shooting in California (which means it's escaped the intertoobs and entered the "real" world!) is a sign of "deep divisions" in the country, because such a critique would have been unthinkable even a few years ago.

Well, of course, I should start by noting this critique began in the "real" world, with the New York Daily News.  But it's hardly an "unimaginable" complaint, except to an evangelical like Mr. Moore, who assumes that what he calls good is good, and what he calls bad is bad.  I will not call the complaint about such empty platitudes as "thoughts and prayers" bad; I will present my argument for it.

It demeans prayer to use it so casually as to rattle off the word in response to any story of such a sensational crime.  This has been pointed out before:

“As I said just a few months ago, and I said a few months before that, and I said each time we see one of these mass shootings, our thoughts and prayers are not enough,” [President Obama] said.

Emma Green of the Atlantic thinks the current criticism is "prayer shaming."  But it is actually the legitimate critique of the use of religion by the religious.  Or, at least, it can be.  As Jim Naughton of the New York Daily News wrote:

DC pundits seem unable to grasp that many people upset by pols' "thoughts and prayers" rhetoric are not mocking prayer but defending it.

Prayer is not a request for the salvation of others, or for their comfort.  Prayer is directed at us, not even to God.  Review the Lord's prayer again:  the first lines acknowledge humility before God and emphasize the very Jewish idea that even God's name is holy and should be kept holy.  The following lines ask for God's rule on earth, without qualification.  Keeping in mind the statement of the prophet that the day of the Lord is a day of darkness, not light, that isn't necessarily a request for hegemony.  The next lines address the needs of the one offering the prayer, but those needs are confined to this day's daily bread; nothing more.  And the rest is directed toward our attention to others:  may God be lenient with us, to the extent we are lenient with others.  Our fate is tied directly to theirs.  Am I my brother's keeper?  Yes, but only in the sense that my brother is my keeper, too.

In that "lesson on how to pray," where is there room for the formulaic "thoughts and prayers" of politicians?  What kind of prayer, precisely, are they offering?  Concerns?  Compassion?  As Jesus says to his disciples:  the Gentiles do as much.  Frankly I would ask Mr. Moore:  if that's all your evangelical Christianity, with all its concern for secularism, has to offer, then how are you any different from the secular humanists?  Is this all there is?

Prayer is holy.  Prayer is sacred.  We do nothing for the victims of crime if we only "hold them in our prayers."  That's a social formula, an empty phrase; it doesn't even engage our sensibilities.  We say it as casually as we say "Bless you!" when someone sneezes, little thinking that we mean anything except it is the thing to say when you hear a sneeze.  It is neither prayer nor blessing, it is simply polite reflex.

To echo Mr. Pierce on this point, I, too, am heartily fed up with this nonsense:

It's long past the time to break the power and influence held over our politics by a splinter faction of one form of American Christianity. It's long past time to make refashioning the Gospel into talking-points—​and, worse, a vehicle for ratfcking—​a political liability rather than a political asset. It's long past time to ignore the bleating of self-professed Christians who specialize in marinating in their victimology, who build their own Golgothas, and who drive the nails into their own palms. If so-called "prayer-shaming" is the first step in that direction, then Chris Murphy's entire career in politics has been worthwhile.

Enough with empty pieties and meaningless platitudes!  Prayer is not a wish or a polite word, prayer is powerful, but only if we engage its power!  It is the true power of powerlessness.   Prayer is activity, not passivity.  To relegate it to the passive sense, "I will pray for you," is to reduce it to a nothing, a "Shape without form, shade without color,/Paralysed force, gesture without motion." Prayer is not something done to us, or in spite of us; prayer is done through us.  Prayer is our action in the world, not our wish for ourselves.  Prayer is not a plea for Xmas presents; it is for the strength to get up and do what needs to be done.  And our prayer is answered when we get up and find out what strength we have, and what it allows us to do.