"And believe me, my admiration for you hasn't died...." 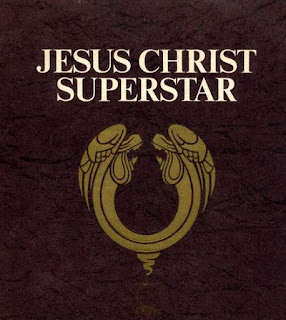 My mind is clearer now
At last, all too well, I can see
Where we all soon will be.

If you strip away,
the myth from the man
you can see where
we all soon will be.

Jesus!  You've started to believe
the things they say of you!
You really do believe,
This talk of God is true!

And all the good you've done
Will soon get swept away
You've begun to matter more
than the things you say!

Holy Week begins again.  Time to dust off the original recording of "Jesus Christ Superstar" and start playing it loudly when no one else is at home (why inflict my memories on my family?).  That's the music for Holy Week at Chez Advents:  "Jesus Christ Superstar" (original record recording, please, scratches, pops, and all.  Ian Gillan is the ONLY Jesus allowed to sing the role, IMHO.) and Bach's Easter Oratorio.  On Easter, of course.  Holy Week should be conducted with the meditation that "All your followers are blind!  Too much heaven on their minds!"  But this time around I hear the words of Judas anew.  What would it mean for Jesus to matter more than the things he said?

It's a Paul v. the Gospels question, but not the simplistic question simplistic critics of Paul think is so fatal to Pauline studies and the Pauline letters.   What Jesus did matters more to Paul than the things he said because Paul only quotes Jesus saying some of the words of institution (as we call them now) of the eucharisto (as he called it then).  It's the gospels that give us the parables and the statements about Peter ("Rock") and the miracles.  Paul only has the resurrection to rely on; but it's enough for him.

So, first:  which should matter more?  The resurrection; or the sayings of Jesus?  Well, if you go with the resurrection, then it seems that is paramount, because that is now seen as the salvific act by which sinful humanity is spared the depredations of damnation.  But if you go with what Jesus said, then the focus on the resurrection (and so salvation) is the wrong place to put the emphasis, as it tends to let you off the hook for what you do, so long as you believe the right things about the resurrection on any given Sunday morning.

Do my prejudices show yet?

It really is the dividing point of Christianity.  Easter is the most important date on the Christian calendar for the Orthodox Church.  Fortunately for the Protestant churches Easter is always on a Sunday; it isn't the moveable feast that Christmas is (this will be a problem again this year).  But in secular Christianity, Christmas is the big holiday.  Easter is relegated to hats and clothes (not so much any longer, but once.  I'm thinking that was more American aberration than not, but, no matter.) and colored eggs and chocolate bunnies.  Even churches have Easter egg hunts on Sunday after the celebration of the Resurrection; and we jammed Passion Sunday into Palm Sunday because otherwise nobody would be in church to remember the Passion story (be honest; how many people do you know attend Good Friday services?  If done right, they are seriously depressing.  If done wrong, they aren't worth the bother.  I only remember Maundy Thursday service in my Presbyterian childhood; an evening communion service, but nothing else until Sunday morning, and lots of cheery sunrise services around town.  Get up early and have the rest of the day to yourself.  Yes, I am cynical; why do you ask?).  Easter is just the other Sunday when you should be in church (well, Christmas Eve is almost never on Sunday, and when it is, do you go in the morning, or in the evening?  Never both, amirite?).

Besides, the eggs and chocolate are for the kids.  I mean, you can get a box of Godiva with affecting scenes of Spring on the outside, but chocolate bunnies are definitely not for a palate craving high-dollar chocolates.

So, which really matters more?  To the "are you saved?" crowd, it's the Resurrection, whether they realize it or not.  The whole question of faith comes down to "letting Jesus into your heart", and that means accepting the sacrifice on the cross which paid in God's blood for your sin (Anselm's satisfaction theory, but there are so many variations the distinctions begin to blur unless you are really, really interested in it.  Don't even  get me started on TULIP.  Please, just don't.)  But that's the problem with salvation in Christianity:  it's used to divide the sheep from the goats, and to make sure you are among the sheep.

An idea which would appall Jean Cauvin, by the way.  Which is kinda funny.

Anyway, as I've noted before:

Which is as good a way as any to get me around to this meditation on Psalm 73 by Martin Buber, courtesy of Pastor Dan:

The good, says the Psalmist, is ‘to draw near to God’. He does not say that those near to God are good. But he does call the bad ‘those who are far from God’. In the language of modern thought that means that there are men who have no share in existence, but there are no men who possess existence. Existence cannot be possessed, but only shared in. One does not rest in the lap of existence, but one draws near to it. ‘Nearness’ is nothing but such a drawing and coming near continually and as long as the human person lives.

Of course "drawing near to God" is, in salvific terms, being "saved."  Well, in certain salvation theories; and there's the rub.  How do you draw nearer to God by drawing away from other people, or by drawing a circle round those inside the blessed, and those outside (the damned)?  Is what Jesus said at all relevant to what Jesus did, to who Jesus was?  Is the Psalm as Buber reads it relevant at all?

Can we possess the salvation of the Cross, the blessings of the resurrection?  Or can we only share in them?  Paul never hoards them for only those who appreciate the gift; he throws it wildly, like seed.  He scatters it to anyone who wants to listen.

This idea Judas expresses, what Jesus did v. what Jesus said, comes up all the time.  Just this morning in an interview at Salon about the bombings in Brussels, Pastor Dan said this:

You mention this in passing: The matter of praying for enemies, including violent ones. To what extent does that make sense, and do you feel conflicted by the issue?

I don’t feel conflicted by it, but then I’m a conflicted Christian. I don’t expect it to make much sense to someone who isn’t. From the Christian perspective, we always have to come back to the perspective that Jesus died for us all. He died for his enemies as much – if not more – than his friends.

And not just for the good people.

Maybe it's just an easier shorthand to refer to the deed rather than the words, because you don't really connect the Crucifixion to your enemies except through the words of Jesus; and, not coincidentally, the words of Paul.  But to explain that you have to put the words in context, and as Pastor Dan notes, that's not a simple task.  Easier to mention the deed (actions speak louder than words), even though the interpretation of that deed is itself a complex exegesis.

Not for nothing I'll quote the conclusion of that interview, because it saves me writing it out again, and because it points to the true importance of the Crucifixion, the lesson that has to be learned over and over again, the lesson of Holy Week and why it isn't about "just us":

Today you tweeted: “Reminder: this week we remember a man tortured to death as a potential threat to the security state.” I think I know what you mean here, but if you could tell us a little more about where you’re going with that.

The Romans were literally an occupying force in the state of Israel; it was a military occupation. The way Jesus’ enemies got the Romans to execute him was to say, “This guy wants to lead a rebellion against your occupation.”

And the Romans take the bait. If you think about what happens in that scene with Pontius Pilate: Pilate isn’t even convinced that Jesus is the threat he’s made out to be. But, he’s not going to take any chances, so he goes ahead, and kills him.

Because Jesus is a nobody. Pilate pays no price for executing just some other guy who’s getting wise about our presence in Palestine. He’s not even a military threat – but he might possibly be one. And the response is, “Torture him, kill him. Be done with it.”

One of the points is, This government is repressive and dysfunctional. And Jesus comes in way to say, both to the oppressed and the oppressors: “This isn’t working. There is a better way to do things.”


"Always hoped that I'd be an apostle; knew that I would make it if I tried.  Then when we've retired we can write the Gospels, so they'll still talk about us when we've died. " Almost 45 years later, those words till conjure up certain images.

Sorry; the stereo is going as I type.

The message of Jesus is easily encapsulated in the basileia tou theou, a phrase I refuse to translate because all the translations mislead into "kingdom" and "empire" and "God" in ways we're trained to listen for and understand, and I want to wear away all those meanings and plant the seed in fresh ground.  New wine in new wineskins, and all that.  Besides, I like the echoes of "basilica" there; it's appropriate, in its own way.  It's easily encapsulated there, but it's not easily conveyed there.    Which is fine; it shouldn't be easily conveyed.  You have to study the words of Jesus to understand it; and you have to study the deeds, to.

Which is not to say Jesus should matter more than the things he said.  Even God doesn't earn that distinction.  That's the creation of an idol; a figure of stone or wood or even feathers, an object of human creation, a golden calf.  We don't need that.