Can power even be avoided? 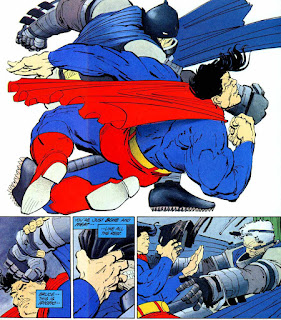 A thought I didn't manage to squeeze into that long diatribe about the movie nobody loves, is something I really want to reserve for the evaluation of the religious aspects of the story.  I've mentioned it before; it's Lex Luthor's line to Holly Hunter's character, a U.S. Senator from Kentucky (yeah, I know, real alternate universe stuff here).  The oldest lie in America, he tells her, is that power can be innocent.

That's an absolutely Niebuhrian line*; and the fact its stated by the villain of the story makes it even better.  But I'm not worried about moral man and immoral society or the irony of American history just now; I'm more interested in fascism and accepted narratives.

As I said before, part of the movie criticism of "B v. S" is rooted in me-tooism or group think or whatever you want to call it.  I call it common narrative: "serious" critics knew they could not praise a comic book movie, so they had to find reason to denigrate it:  too dark, too serious (seriously), and, of course, NO PLOT!  But we've dealt with that; what I'm interested in now is the change in the character of Batman caused by the work of Frank Miller, and how that change is now commonly discussed.

The usual measure of Miller's Batman is that he's a fascist (I'm pretty sure Andrew O'Hehir mentioned that here, by way of a footnote.).  The funny thing is, he isn't.  He's a criminal.  He says so himself in Miller's "The Dark Knight Returns."  And Ben Affleck's Bruce Wayne practically quotes those words to Alfred, in "B v. S."  The distinction is important.

No one has ever, so far as I know, called a criminal a fascist.  An anarchist, maybe, but never a fascist.  Criminals and anarchists want to destroy the system; they want to create chaos.  Vigilantes are almost anarchists because they think the system is failing them, and they will "Take the law into their own hands" in order to set things right.  Criminals don't want to take the law into their hands; they want to defy the law.  Anarchists want to undo the law.  Fascists want to use the law:  to govern, with a very strong hand.

Vigilantes don't want to supplant government; they want to supplement it.  They act because they think government can't, or won't.  Their actions could be anarchic, but that isn't their intent.  Criminals want to evade the law; it's fine for everyone else, but for them their own set of rules (if any) is what they will follow.  Fascists don't want to be vigilantes or criminals; they want to be the government, the law, the rules.  They want complete control.

Miller's Batman doesn't want control; he wants justice.  He wants to do what the law won't, or can't; but even he won't kill the Joker, even after the Joker has killed hundreds in his escape from Arkham Asylum (in the "Dark Knight" series that Miller wrote).  Batman never takes the law into his hands that way; he never supplants the government entirely, or becomes a tool of the government.

But in Miller's telling, Superman does.

In Miller's universe Superman has become a "secret" agent of the Federal government.  TV stations get cut off the air in mid-sentence before a reporter can so much as mention the name "Superman."  Miller shows him on the battlefield, destroying tanks and jets which are presumably manned (Superman kills!), all in the name of "national security."  It's a scenario that takes on fresh meaning after 9/11 (the story was published long before).  After all, if you're going to protect people from evil, why not protect us from national enemies?  What's the line between stopping super-villains (or monsters, in the movies) and stopping national enemies, be they armies or suicide bombers?

I mention this because part of the plot of "B v. S" hinges on Holly Hunter's character holding hearings into what should be done about Superman.  As she tells him, in the United States we do things by consensus, not by the decision of one person.  Superman is shown hovering above a set of flooded houses, the occupants crouching on the roofs inches from the water.  This is obviously good:  one super-man can save all those poor victims of nature.  But he also saves Lois Lane from an African warlord Lane has gone to interview, when the situation goes pear-shaped.  That's good, too, right?  He saves her again, when Luthor throws Lane off a building.  Good, right?  But should Superman then threaten Luthor and try to arrest him, with no more power than his superpowers as authority?  Why does he get to decide who to take to the police, or who to assault on behalf of his girlfriend?  And if society disagrees with his decisions, what does society do?

In Miller's telling, society has decided by getting Superman's acquiescence.  It comes to that question:  who gets to decide what Superman does as Superman, in the movie; but then the question is avoided (with action; this is an action movie, not a philosophical examination of the nature of society).  But in Miller's telling Superman is the fascist:  he is the power the President alone can direct, and the ultimate power on the planet (literally a one-man army), under the direction of one Commander in Chief and absolutely no one else.  If that isn't fascism, what is?

But it's Miller's Batman who gleefully kicks ass and takes names, who is (in his own words) "born again" when he returns to crime-fighting and delights in brutalizing suspects (he breaks legs, he terrorizes people for information), and we can't approve of that, so:  Batman must be the fascist (fascists are bad!) and Superman must...not be mentioned.  Just like in Miller's story.

The movie, as I say, doesn't resolve the question, although it does ask it (from another Superman story):  "Must there be a Superman?"  The comic book left that question open.  Hunter answers it:  "Well, there is."  And the legitimate issue is:  what would a government, a society, a civil people, do about that?  Praise his independent actions, no matter what they were, because society would always approve of them?  Or control his actions by insisting he had to act in consultation and connection with others, the way our government does.  Even the FBI doesn't act on it's own volition:  it answers to the Justice Department, to the Court system; it has to go through the AG's to get into the courtroom and prosecute a suspect, and it can't do that if the attorneys don't think there is a case to be made.  Batman foils bad guys but, in Miller's telling (and that responsibility shifts to Superman in the latest movie) Batman fights the police, too, as they try to stop him.  He's a vigilante, after all; or as he says, he's a criminal.  He has to be a criminal.

Can Superman be a criminal?  Can he avoid being a fascist?  It's a very interesting question.