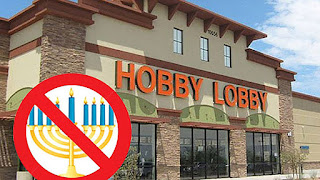 The governor of Georgia vetoes a "religious freedom" bill which would have allowed pastors in Georgia to refuse to do same-sex marriages, and allowed other "believers" to discriminate against people based on religious beliefs.

Which apparently is okay if it means you can tell a gay couple to get out of your bakery, but probably wouldn't be so good if Muslims decided you were an infidel, or Jews decided you were Gentile and they couldn't take your filthy lucre.  No, I don't expect such things to happen, but why couldn't I discriminate against a Jew or a Muslim as a Christian in Georgia?*

Oh, yeah, the Civil Rights Act is why.  But at least I could discriminate against gays and lesbians and transgendered persons, and that's what religious belief is all about, right?

According to the Hobby Lobby decision, it is.  That's the Supreme Court ruling that unlocked this Pandora's Box which North Carolina has gleefully knocked the top off of, while Georgia has decided maybe that's not such a good idea.  And still the Supreme Court dithers.

The Court has taken the unusual step of acting like a legislative body:  they want more facts about insurance policies and what they cover before they can rule in Zubik v. Burwell.  Some see this as a sign Chief Justice Roberts or maybe Justice Kennedy want to rule in favor of the government, and need a fig leaf to cover them.  I wonder, however, if it isn't the male justices trying one last time to find evidence to support their fantasy about insurance and lady parts and delicate religious fee-fees.**

The only comfort I would draw from this discussion if it were happening in a legislative setting is that at least those involved were elected officials who could be removed from office in the next election.  True, incumbency is practically a life-time appointment, but it ain't necessarily so.  Being on the Supreme Court, as Justice Scalia just showed us, is forever.  Forever is turning into a very long time, indeed.

Ever since Hobby Lobby it has been open season on how far religious believers can go in extending their religious beliefs beyond the end of someone else's nose.  Now it is an offense to their delicate sensibilities (but never to God, interestingly enough) to not be able to discriminate against gay couples.  Of course, Georgia doesn't have a law banning discrimination on the basis of sexual preference, so Georgia bakers and dress makers and flower arrangers are free to say "NO!" to any couple they want to refuse, and pastors across the country, even in states with anti-discrimination laws, are free to refuse to conduct weddings.

Not because God tells them they must do so; but because they are delicate flowers who should not be forced to live in a world that includes people not just like them.  That's really what the argument is now.  It isn't religious at all:  it's selfish.

And if that doesn't go against the teachings of Christianity (and all these cases and laws are clearly aimed at "protecting" Christians first, not Muslims or Jews or Buddhists or Hindus, or what have you), then I don't know what does.

*Or, apparently, if I run Hobby Lobby.

**Just because it makes me look smart, I have to note that Dahlia Lithwick agrees with me:

Then, later in the day, the court handed down a truly baffling order in last week’s Zubik v. Burwell contraception mandate case asking the parties for further briefing. The order is one of the strangest things I have ever read. It demands the two parties comment on an imaginary workaround that would allow religious objectors to the Affordable Care Act’s contraception mandate to notify their insurers that they object to providing birth control, but in an even more subtle fashion than the workaround already given them. One can almost hear Anthony Kennedy hollering between the lines: “Give me a legislative FIX, stat,” through all the legalese.