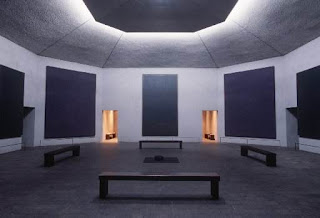 I said sometime back that I was going to a Rothko exhibition, and would report back on the experience.  Well, I voted today so I'm feeling expansive (no baked goods, sadly; not even a donut. But I still enjoy voting, even though the ballot in Texas is always ridiculously long.  We elect everyone, practically down to the janitor in the Capitol.  Supreme Court Judges, Appellate Judges, District Court Judges; County Court at Law Judges; County Commissioners; Constables; District and also County attorneys; and I haven't exhausted the list.  Eventually you just vote for a name, or skip it and leave half the ballot blank.  Who can keep up?  Still, I feel good after; it's something old fashioned in me, ).  So, feeling expansive, I start with the idea that museums were originally meant to be places for education; and now I am educated.

I'd never been too interested in Rothko's work because what I knew of it was primarily the Chapel, and I thought the space too dark for the works, and the works themselves too dark for anything but sunlight.  These paintings, I learned, are the "Black" series, so the darkness in them is intentional, not happenstance; and their placement in the Chapel is intentional, too.  I wasn't failing to see those panels in the setting they were intended for:  I was failing to look.

The retrospective helped, too.  I've found it easier to grasp an artist's work in the context either of art history, or in the setting of as much of their work as possible.  There was a Monet exhibit at the Museum sometime back; I've always loved Monet, but seeing as many of his paintings as possible in one place, especially the paintings he made of one location across the passage of a day, was a revelation.  I was equally stunned by Rothko's work, especially as I saw it work toward the "Black" paintings.

It also helped that there was music there.  A chamber orchestra was playing in the galleries the day we viewed the paintings.  That was happenstance, good fortune for us; not planning.  They played 3 pieces; one only a few years old, the other written within this century (or late last century), and a piece of a larger work from Mozart.  I meant to keep the program to pass on the titles, but I don't have it now.  The newest piece consisted, as best I can describe it, of long notes held for several measures (there was no particular rhythm to it) on the stringed instruments (no woodwinds or brass, no keyboards either).  It blended perfectly with the paintings, and put me even more in the mood to look at Rothko's work and see what he was doing.

By the time I got to the room where the orchestra was, it reduced to a quartet (I don't think it was actually any larger than a sextet), and they closed with the Mozart.  It was as beautiful and appropriate to the setting as the other compositions were.  I mention it because we too easily forget that art can be enjoyed with the senses; that music can compliment the plastic arts and enrich the viewing experience.  That, and I too little get to hear live music played on instruments.  Although I'm a child of the '60's musically, and one of my best memories is seeing CSNY on their only tour in a stadium in Irving (the Cowboys stadium before they moved again), I more and more find amplified music (guitars, singers, etc.) to be false.  Live music:  the human voice without amplification, strings and woodwinds and brass, has a timbre and beauty that the best recording equipment can't capture or reproduce.  More and more I find, if I can't hear it live, I don't want to hear it that badly (not that I have trashed my records, CD's and MP3's).

It added a layer to the experience of the Rothko's that opened me to the entire experience more fully.  I'm going to go visit the Chapel sometime this summer, when I have the time to go down there.  Might have to take a iPod with me, though.