We are fine, they are the problem 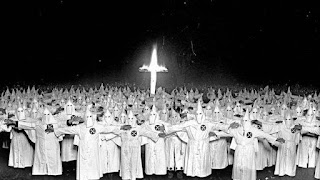 NPR was just interviewing a gentleman who is trying to steer young Muslims away from ISIS.  He talked about how ISIS uses selected verses from the Koran and applies them to "geopolitics" (his term), and how it's a method that can be very persuasive.

And it struck me:  persuasive to whom?

The majority of the world's Muslims live in southeast Asia; but no one has images of Asians flocking to Syria to join Daesh in the fight for a caliphate.  I imagine most Muslim Asians aren't even interested in a caliphate.  That's a cultural marker, not a religious one.  It would mean as much to me, a lifelong Protestant, as an appeal to re-establish the Holy Roman Empire, which was Roman Catholic and European (i.e., not Asian or American).  Now maybe if you wanted to establish a new German principality or take over Geneva again.....

You see the point already:  the appeal of Daesh is an appeal to culture, not to religion.   Yet it is, in a sense, pan-cultural; but that's no different than distinguishing the culture(s) of Texas from the culture(s) of California, or of Idaho (or Vermont or Maine, for that matter).   The minor differences are overridden by the major ones.  If you condemn Islam for militancy, you might as well say Christianity is the source for white supremacy.  In America there are strong connections between Christianity and white supremacy, at least among white supremacist groups.  We tend to think of the KKK as akin to skinheads and other Neo-Nazi groups, but the KKK used to (at least; I'm not up on their current ideology) justify their brand of race hatred with appeals to scripture, and how God opposed the "mongrelization" of the races.  Most of us understand that appeal was cultural, not religious; and we've never condemned religion as a whole for the vile ideas of the KKK and other white supremacist groups that used religious language to make their appeal.

It's not an appeal that reached very many of us; then again, our country has never been in the midst of the kind of chaos visited upon Iraq and Iran and Afghanistan and Syria, to name but four; and almost all of that brought into those countries by the "West."  So even those the message reached where never in a position to push chaos the way Daesh is now, a chaos that makes them look bigger and stronger and more important (and even representative) than they really are.

Why is the message of hatred Daesh spews appealing?  Because it has a cultural appeal, not a religious one.  Eliminate religion (an impossible goal, and as sensible as a child wishing to eliminate school so they can play all day every day), and you would still have Daesh, or the bombing in Brussels.  Religion is being used as a cultural marker here; but it's the underlying culture, and the history and geopolitics of a region, that is at play.

And what really matters is how it affects us.  Is anybody really concerned with the chaos in the Sudan?  Or the Lord's Army in Nigeria?  Well, somebody is, but you know, I mean us.