"And what does the Lord require of you?" 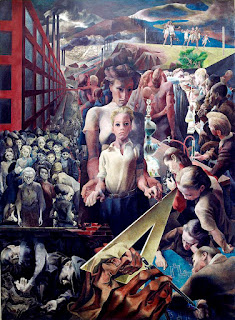 This is a very good article on a very weird event.  I have a friend in Louisville, in the ministry, who attended this "meeting" where Gov. Bevins said the solution to violence in Louisville was prayer.  He thought it rather weird, too, to put mildly.  How he put it to me privately is not for publication (because I haven't asked his permission), but we've been friends for over 50 years, so you can imagine it if you try a little.

Gov. Bevins' proposal, as reported by RD, is

for faithful Christians to volunteer and assemble in “small groups of three to 10 people to begin a ritual of quietly walking one block, in one troubled neighborhood, at 7 p.m., several days a week for one year, praying as they walk.” The governor admitted the plan was “Pretty unsophisticated. Pretty uncomplicated. Pretty basic,” but he insisted—“I truly believe… I personally believe”—that such ritual prayer has the power to change material reality. “I’ve seen it,” he testified.

Sure he has.  I mean,  I believe in the Creator, Redeemer, and Holy Spirit, but that doesn't mean I believe in magic.  Or that I'm stupid.  I also think it's "unsophisticated and uncomplicated" in a way that allows it to be irresponsible,  as in, the people praying have no responsibility if their prayers don't move the people prayed for to become non-violent poor (black) people.  Let's just take a few quotes from pastors of churches in that part of Louisville, along with observations by the author of the article:

“The fact of the matter is there is violence in the community because there is poverty, and the poverty is rooted in systemic injustice and racism that has plagued this country since 1619,” [Reverend Kevin Cosby of St. Stephen Baptist Church] said. “To talk about the present situation without talking about the historic and social antecedents that gave birth to it is disingenuous, is dishonest… it’s cowardly and it’s political.”
....
“West Louisville needs the help that a governor can uniquely provide. Governors hold enormous power. Their hands rest on levers that could combat directly and profoundly the root cause of violence: poverty.” [Reverend Joe] Phelps [of Highland Baptist Church] argues that coinciding with the color-coded areas of the Louisville maps Bevin displayed at his meeting are African-American neighborhoods devastated by decades of national, state, and local policies favoring white communities and leaving black West Louisville to fend for itself. Jim Crow laws. The G.I. Bill. Bank redlining. Social security. All designed for whites to prosper—but not blacks. Systemic, governmental racism. Christians can acknowledge these sins and, like Luke’s story of Zacheus the tax collector, make financial reparations.

Those gentlemen echo the call of Micah:  what does God require except that you do justice, love mercy, and walk humbly with God?  Frankly, praying in public for all to see is much easier than all those activities, and doesn't require making amends for "systemic governmental racism...all designed for whites to prosper."  Prayer, I might add, should be for you to seek humility before God, not to ask  God to do things to (or for) other people that you can't be bothered to do.  The RD article goes on to examine a divide in American Christian theology which I think is both deep and real and well-realized there, but for my purposes I prefer Occam's Razor and the simpler solution:  people are selfish, and it's easier to pray for someone, than to actually do something for someone.  Which is pretty much why Jesus condemned public prayers, especially of the kind the Governor is calling for.  I'm pretty sure Jesus wouldn't be too impressed with this, either:

“I think that the problem there is pretty clear that it’s a crime problem,” said Huckabee Sanders. “I think that crime is driven more by a morality than anything else so I think that this is a law enforcement issue and our focus is trying to add additional support.”


Sarah Huckabee Sanders is speaking there for the White House about the crime problem in Chicago.  Call it the flip side of what Gov. Bevins is advocating, because it's the same coin:  pray that these people become more moral and therefore less criminal, because crime is driven more by morality than anything else.  Again, a convenient way out of any responsibility for the privileges somebody like Sanders has enjoyed all her life, and a comforting way to turn a blind eye to social injustice.