"It's the only thing"


Vince Lombardi used to say:  "Winning isn't everything.  It's the only thing."  Matt Yglesias starts us here, and points out this is a "telling thing."


The thing about this is there is, literally, no tax bill.

No tax bill has been introduced to the US House of Representatives.

No tax bill has been introduced to the US Senate.

The White House has not released a tax plan that is detailed enough for experts to assess its economic or fiscal impact.

You can ponder why Trump thinks there is a tax bill, or why he would mention it in a speech about cancelling U.S. participation in the U.S. Climate Accords (which, yes, diminishes dramatically our position in the world, a consummation devoutly to be wished by Steve Bannon, and is our children finally learning just how bad Trump is?  Nah, they put up with W. for 8 years....), but it isn't a "tell" that Trump mentioned this fantasy in his rambling peroration.

It's the only thing of importance he said.

No, his arguments for leaving the Paris Accords don't line up with reality (the scale of measurement for global temperature rise is not the same scale the weatherman uses on the TeeVee machine), but did anyone expect them to?  Nothing he said about the Paris Accords really means anything to U.S. efforts to combat climate change (minimal as they are anyway, and will be for the foreseeable future, whoever is in the Oval Office).  But what he said about something as fictional as the Flying Spaghetti Monster should give us all pause.

Pause to take another drink, if you are so inclined.   I think I'll need something stronger than the morning brew. 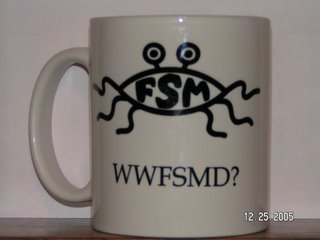 This is not the first time the President has done this even this week.  That 25th Amendment is looking more and more credible by the day.