Having nothing to say about Sebelius v. Hobby Lobby, I manage to say too much 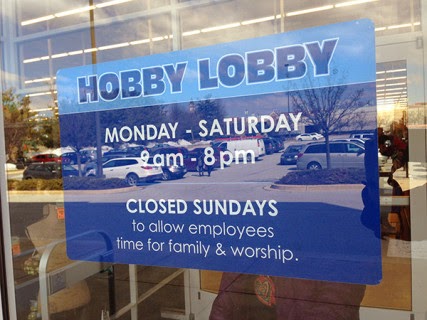 I'm not as exercised by the oral arguments in the Hobby Lobby/Conestoga cases before the Supreme Court yesterday as most of the internet seems to be.  Predicting outcomes from oral arguments is a mug's game.  Scalia will have to distinguish these cases from Smith, especially after what Justice Kagan did to him yesterday.  Roberts can't really be expected to vote to allow something that pretty much obliterates the corporate veil, although I can see him coming up with some meaningless distinction between closely held corporations and public ones; but I don't really expect that (the 10th Cir. opinion rests in part on that distinction, but I don't think their opinion is all that persuasive overall, especially on the question of "person" under RFRA, and how a secular corporation can have sincere religious beliefs).  Scalia's argument in Smith is still too cogent for this set of facts, RFRA notwithstanding.  But basically, news reports that boil down 90 minutes of oral argument to a few quotes from each justice (except silent Clarence; maybe a lacuna should be included in each report to represent him) inevitably leaves out bits like the discussion of the Dictionary Act (whether or not a corporation is a "person" within the meaning of RFRA.)  Dahlia Lithwick gives the only account I've found of any reference in the arguments to this, but she doesn't linger on it, either.  That could be because justices didn't, but on such issues the Court could determine this entire case.  As Sotomayor asked in response to that reference:  "Who determines the corporate religion?  The majority of the shareholders?  The corporate officers?  Is it 51 percent?"

This question goes to the "closely held corporation" analysis I found at Volokh Conspiracy (which has the virtue of attempting to be a legal analysis rather than an  "OMIGAWD SCALIA!" and "What the hell is wrong with Kennedy?" analysis).

Still there are, as you might have expected, some problems.  I'm not sure this one actually is present before the Court, but we'll address it anyway:

The moral obligations of human beings, the argument goes — correctly, at that level of generality — do not stop when the legal fiction of the corporation intervenes. Corporate owners can’t say, “Hey, it wasn’t me who created these social harms, it was the corporation that I own.” The same, I think, applies when we analyze the religious burden on owners when a law prevents them from doing what they see as part of their religious social and moral responsibility.

Well, yes, but moral obligations and legal obligations are two distinctly different things.  The closest the law comes to imposing moral obligation is in cases of fraud or where equity applies.  Otherwise morality doesn't really enter into the legal analysis, at least not fundamentally.  And besides, corporate owners say all the time "Hey, you can't hold us accountable!  The corporation did it!"  After all, who paid the fines for the BP oil well blowout in the Gulf?  BP?  Or the executives and shareholders, personally?  Corporations create all manner of social harm which they either don't get held accountable for, or for which the corporation pays the fine.  The Occupy movement was the last attempt to shift that responsibility to actual persons; and most people still deride the "Occupiers" naiveté.

Now, to that question of the closely held corporation.  It's my understanding Hobby Lobby is owned by a trust which in turn is controlled by a family; so "closely held" pretty much applies here.

But now we are back to Sotomayor's question, one based in no small part on the Smith decision that caused Congress to pass RFRA in the first place.  It is a question of sincerity of belief, and validity of belief.  Is the Hobby Lobby owners belief that Plan B and Ellas and IUD's are abortifacients valid?  Scientifically, no, it isn't valid at all.  All three forms of contraception work the way contraceptives they find acceptable work.  Neither induces an abortion by expelling an implanted fetus.  That the owners of Hobby Lobby believe otherwise is no more relevant than if they believe the earth is flat.  They are free to believe it, in other words, but they cannot use that belief as the basis for deciding they get a free pass on any law they don't like.

You'll notice in that analysis that "belief" has nothing to do with "religious belief."  Already we enter dark waters, because what is a "sincerely held religious belief"?  Is it accepting as true something you know isn't true?  Is it adherence to a traditional doctrine ascribed to by generations of believers across space and time?  Is it belief in the efficacy of "E-Meters"?  Which one do you want the courts to declare invalid, which valid, and why?  That you should be careful how you answer should be obvious to anyone.

So the courts do not answer these questions; that even attempting an answer would violate the 1st Amendment is clear.  It is, in fact, the refusal to answer this question that led Scalia to write the Smith decision, and which outraged Congress into passing RFRA.  We don't want this question answered; but we don't want this question ignored, either.  Congress determined that by refusing to answer it, the Court in Smith did in fact answer it; and Congress didn't like the answer.  And so now we have to decide if RFRA applies to corporations, and if so, which "sincere religious beliefs" are corporations entitled to?

At this point I'm reminded of the old joke Bill Moyers loves to tell:

One of my favorite stories is of the fellow who was about to jump off a bridge, when another fellow ran up to him crying, “Stop, stop, don’t do it.”

The man on the bridge looks down and asks, “Why not?”

“Well, your faith. Your religion.”

“Me, too. Christian or Buddhist?”

“Me, too. Are you Catholic or Protestant?”

“Me, too. Methodist, Baptist or Presbyterian?”

Whereupon, the second fellow turned red in the face and yelled, “Die, you heretic scum,” and pushed him off the bridge.

It's funny 'cause it's true.  Do we really want the courts entering into that arena?


And even if the courts conclude otherwise, and say that the corporation cannot itself bring the religious exemption claim, the owners should be free to raise their own claims. If we see through the legal fiction of the corporation in concluding that corporations lack RFRA rights, then we should likewise see how obligations imposed on a closely-held corporation can oblige its owners to be complicit in what they see as sinful behavior.


The problem with this argument is that it doesn't get past the objections raised by Smith.  This argument means the employer can refuse to pay or hire employees who don't pledge to be teetotallers or fundamentalist Xians of the right denomination.  Because if requiring a corporation to provide certain coverage is an undue burden on the owners' religious beliefs, then so is forcing an employer to pay money to an employee who will spend that money in ways not in accordance with the owners' religious beliefs.  Employee provided insurance is compensation, not something provided by the employer as a gift.  It is earned as a matter of employment, just like payments to a 401(k) or just a paycheck.  If the owner is complicit in sinful  behavior by providing coverage for IUD's, he/she/they is/are equally complicit by hiring an employee in a store 50 states away who is an atheist or an alcoholic.

There are other issues here, issues I'm quite sure a corporate lawyer like Chief Justice Roberts is quite aware of.  If the religious opinions/beliefs of shareholders are attached to the corporation, then the corporation ceases to be a separate legal entity shielding the individual owners from direct liability for corporate actions:

As a a brief filed by corporate law scholars explains, “[t]he first principle of corporate law is that for-profit corporations are entities that possess legal interests and a legal identity of their own—one separate and distinct from their shareholders.”  In fact, as recounted in  the brief, this legal separateness is “the corporation’s most precious characteristic,” according to one early American treatise writer, because it creates “limited liability” for business founders and investors, shielding their personal assets.  If the Court were to accept attempts by Hobby Lobby and Conestoga Wood to blur the distinction between a corporation and its owners, it could  undermine key features of corporate law

That's a rather technical (sorry!) description of the "piercing the corporate veil" argument that's making the rounds.  Volokh's argument is that you can set aside that corporate distinction when it is convenient to the owners/shareholders.  The problem is, as Sotomayor and Kagan pointed out, to do so you also have to set the corporation distinctiveness aside when it isn't convenient.  That, or put the Court in the position of deciding who has legitimate and sincere religious beliefs, and who doesn't.  And to underline the importance of that distinction, and the weakness of Volokh's argument about the corporate entity:

But what about the individuals who own Hobby Lobby Stores and Conestoga Wood?  To be sure, the current owners of these companies have their own personal free exercise rights, but those rights are not implicated by the contraception coverage requirement because federal law does not require the individuals who own a company to  personally  provide health care coverage or to satisfy any other legal obligation of the corporation.  The law places requirements only on the corporate entities.  The individual corporate owners retain their rights under the First Amendment and RFRA, but those rights simply aren’t available when the claimed burden is placed on the corporation itself – just as Randy Braswell retained his personal right against self-incrimination, but could not use that right to shield his business when a subpoena was issued against the corporation he owned.  Individual business owners should not be given a green light to move freely between corporate and individual status to gain the advantages and avoid the disadvantages of the respective forms whenever it suits their purposes.

Funny how we keep coming back to the reasoning of the Smith opinion.  And that may or may not be a good thing.  According to Michael Dorf of the Cornell University School of Law, the Smith opinion may be ripe for reversal.  I didn't hear any indication of that in arguments yesterday, although to support the Hobby Lobby and Conestoga claims Smith has to be distinguished if not rejected (and overturned de facto if not de jure).  That would be a lot to pin on this case:  rejecting Smith, upholding completely RFRA, and deciding the Court should plunge wholesale into the balancing not just of legitimate government interests against legitimate individual interests, but the sincerity and validity of religious beliefs as proclaimed by the owners of a legal entity, and how and when those beliefs get to trump the laws.  Dorf doesn't address that issue, or how the courts would "balance" the issue of whose religious beliefs get to be declared "legitimate" as well as "sincere" (will the courts recognize Pastafarians?  And why not?).  I just don't think the Court is looking to make legal history on this set of facts or legal arguments.

But, of course, I could be wrong.