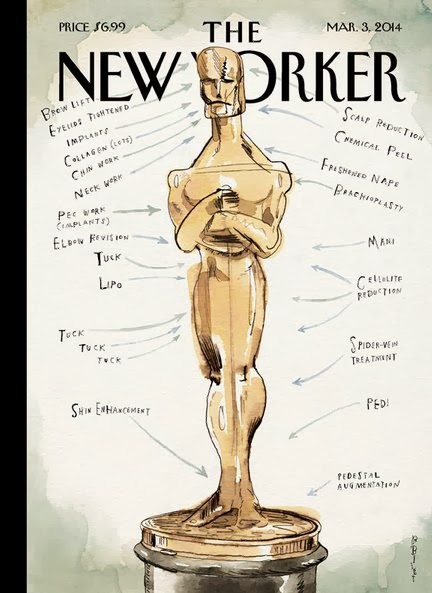 I'm not too proud to admit I watched the Oscars last night.

I caught the best line of the night, the ending of Ellen Degeneres' opening monologue:


But I missed the dancing in the aisles bit, largely because the only singing worth listening to in the entire three-plus hours was provided by Darlene Love.  She taught "Adele Nazeem" how it's done.  She also sang a better song than anyone on that stage.  Wow, music in movies sux.  It seems to be an immutable law or something.

And I missed that Travolta completely flubbed Idina Menzel's name, because I didn't know who she is.  Still don't feel I need to, but YMMV.  I caught him doing it; I just missed that it was a major gaffe.  I'd just as soon have missed her singing.  By the end the Lovely Wife thought she was just shouting; I had to agree.

Darlene Love also gave more credible praise to God than Matthew McConaughey, who really never should have told us who his hero is; and who seemed to understand that about the time he finished his impromptu anecdote.  A lesson to all public speakers:  never go off-script; and always have a script.  Especially at the Oscars:  they're actors. They can fake sincerity, as well as spontaneity.  It would at least be better if they tried.

I also wonder, though, if Ms. Love got a pass on the mention of God because she's a black woman.  Not that Mr. McConaughey deserves criticism for letting his East Texas out for a ramble.  But that "hero" thing....

Thank goodness for Bill Murray, who is much better at impromptu than anyone else on that stage last night; including Ellen Degeneres.  The best thing she did was pass out pizza.  Passing the hat later, though, seemed a bit odd.  One waited for the inevitable announcement that all the proceeds would go to charity, or something.  Or maybe she just gave it all back, or pizza really is that expensive in El "A" at Oscar time.

I even heard Cate Blanchett mention Woody Allen in her acceptance speech, and waited in vain for the ground to open up and swallow her, or for Ellen to pass out pitchforks and torches and lead the village of Hollywood against such an egregious breach of etiquette.  Oh, well, maybe there'll be somebody to be offended by again next year.

And cheers to Lupita Nyong'o, for giving the best Oscars acceptance speech possible, by reminding the assembled multitudes that her character was once a real person, and doing it without browbeating anyone.

True to form, I only saw one of the films nominated for Best Picture, and that's only because they now allow so many movies into that category.  I don't think that move increased competition; it just increased the likelihood your film won't win, but now everyone notices more sharply that you didn't make it to the top.

Anyway, I  wondered yet again how a film that doesn't have the Best Actors, Actresses, Supporting Actors, Director, etc., can be the "Best Picture."  And yes, I know the Best Picture of 2014 won some of the lesser awards; but "Gravity" took many of them, and the acting awards were sprinkled around.  I was sorry "Philomena" didn't get more than nominations, because it was a lovely film and I wholeheartedly recommend it to everyone. Judi Dench gets all the attention for that film, but Stephen Frears really knows how to put a story about real people on the screen (even when, as in "Dangerous Liaisons," they are fictional people).

I missed more of the ceremonies, without missing a thing.  As usual, it was a snoozefest, and all the news this morning is either about gowns or goofs or the narcissism of Hollywood (no, really?  I'm shocked to learn of such a thing!).  As ever, it makes me long for the old days, when Jimmy Stewart (if memory serves) laughed at the name of the Academy, because he said there was precious little art and even less science involved in the industry.