Lord, when did we see you? 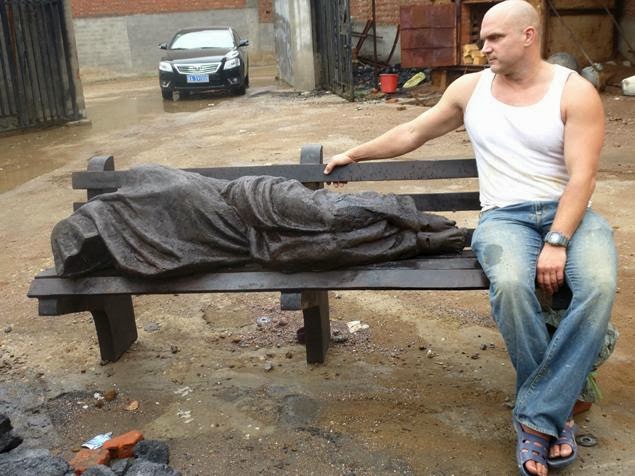 This is absolutely fascinating:

The statue is now permanently placed in North Carolina, and apparently the "controversy" over it is limited to Cindy Castano Swannack, quoted above.  A wooden version was blessed by Pope Francis in Vatican City, and a copy is supposed to be put there, as well.

Most news stories say it was rejected by St. Patrick's cathedral, but that isn't quite true:

Kate Monaghan, a spokesperson for St. Patrick’s told the New York Daily News that the cathedral had to refuse because the building is undergoing extensive restorations.

"But we loved the statue,” Monaghan said. “When the time comes, we’ll certainly take another look.”

All of the news stories I looked at (I googled "Homeless Jesus Statue") refer to the controversy of the statue, but the only person they reference is Ms. Swannack.   Controversy is good for news, just as it is for narrative (and the difference between the two is more academic than real); but her response is truly interesting.

It's also interesting that, while the sculptor quotes Matthew 25 very appropriately, no one references Luke 9 (or Matthew 8, if you prefer):

And Jesus said to him:  "Foxes have dens, and birds of the sky have nests; but the son of Adam has nowhere to rest his head."

This is one passage on which the liberal scholars would agree with the literalists.  This is who Jesus was; and it is who Jesus is.