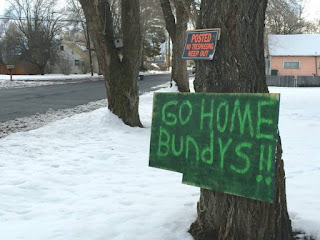 They don't treat BLM this way!

This is why the Bundy "occupiers" are not terrorists.  And why we should all point and laugh now:

"The Black Lives Matter movement, they can go and protest, close freeways down and all that stuff, and they don't get any backlash, not on the level that we're getting," said the man, who identified himself as "Fluffy Unicorn."

And the guy who called this his "supply room" 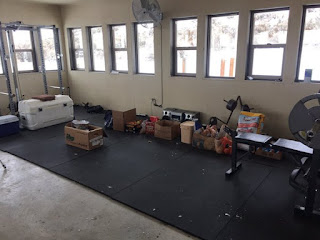 for a long occupation, said this:

I don’t know a lot about the Black Lives Matter movement but I know their initial protest involved lots of looting and violence towards businesses and innocent citizens which I do not agree with. I do agree with them standing up for what they believe in. I just think during their protest they were unorganized and not well-planned.

We have been preparing the camp for a long standoff against federal agents for when they show up. Making sure everyone knows their job when the standoff begins.

So they're just standing around eating and burning wood and waiting for something to start?  Bundy also has what can politely be called delusions of grandeur:

“This will become a base place for patriots from all over the country,” he said, inviting like-minded people to bring their weapons and join up. “We’re the point of the spear that’s going to bring confidence and strength to the rest of the people.”

Except the Guardian reports the plan is to cut power to the site:

“It’s in the middle of nowhere,” said the official, who is based in Washington, DC, and has knowledge of the planned response to the militia. “And it’s flat-ass cold up there.”

“After they shut off the power, they’ll kill the phone service,” the government official added. “Then they’ll block all the roads so that all those guys have a long, lonely winter to think about what they’ve done.”

Snowstorms are expected in the wilderness surrounding the refuge on Tuesday, which is some 30 miles from the town of Burns. At night, temperatures are forecast to plummet to -8C (18F).

The militia, numbering few more than a dozen, have been building fires to stay warm and have been sleeping in the building usually used by the US Fish and Wildlife Service, which runs the refuge for wild birds.

The Guardian also nots that supply room is as empty as it looks to be:

Bundy has repeatedly said the group is prepared for the long-haul. However during a tour of the site earlier in the day, the Guardian was shown a food storage room that did not look like it could sustain a dozen men for more than a few weeks.

It included a cardboard box of apples and oranges, a few dozen pots of instant ramen, 24 cans of chicken noodle soup, a similar number of cans of sweetcorn, peas, beans and chili, and 20 boxes of macaroni and cheese.

There were also three sacks of potatoes, one bag of flour, another of rolled oats, boxes of raisins, a single bag of pretzels and one granola bar.

And this is the best part:

"This is their county – we can't be here and force this on them," Ryan Bundy said. "If they don't want to retrieve their rights, and if the county people tell us to leave, we'll leave."


Well, the sheriff did ask them to leave, yesterday.  Maybe they aren't getting Twitter up there.  Or maybe only certain sheriffs are the lawful authority for a locale.

If anybody else remembers Dandy Don Meredith from Monday Night Football back in the day, I hear him warming up in the wings:  "Turn out the lights, the party's over!"

These guys are very silly.
Posted by Rmj at 4:49 PM