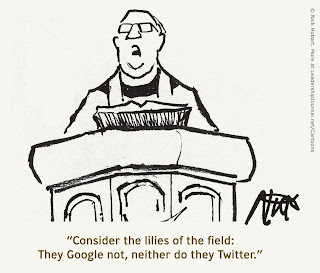 Brueggeman has inspired my thinking.

Start with this, the concluding paragraph to an interesting (and old) article by Thomas Frank:

Consider, then, the narrative daisy chain that makes up the literature of creativity. It is the story of brilliant people, often in the arts or humanities, who are studied by other brilliant people, often in the sciences, finance, or marketing. The readership is made up of us — members of the professional-managerial class — each of whom harbors a powerful suspicion that he or she is pretty brilliant as well. What your correspondent realized, relaxing there in his tub one day, was that the real subject of this literature was the professional-managerial audience itself, whose members hear clear, sweet reason when they listen to NPR and think they’re in the presence of something profound when they watch some billionaire give a TED talk. And what this complacent literature purrs into their ears is that creativity is their property, their competitive advantage, their class virtue. Creativity is what they bring to the national economic effort, these books reassure them — and it’s also the benevolent doctrine under which they rightly rule the world.


Back up and get this, the preceding paragraph to that one:

And what was the true object of this superstitious stuff? A final clue came from “Creativity: Flow and the Psychology of Discovery and Invention” (1996), in which Mihaly Csikszentmihalyi acknowledges that, far from being an act of individual inspiration, what we call creativity is simply an expression of professional consensus. Using Vincent van Gogh as an example, the author declares that the artist’s “creativity came into being when a sufficient number of art experts felt that his paintings had something important to contribute to the domain of art.” Innovation, that is, exists only when the correctly credentialed hivemind agrees that it does. And “without such a response,” the author continues, “van Gogh would have remained what he was, a disturbed man who painted strange canvases.” What determines “creativity,” in other words, is the very faction it’s supposedly rebelling against: established expertise.


Mihaly (I'm not going to try to even copy that last name) is right:  creativity is a matter of consensus. This applies to religious communities and their scriptures, as well.

How are the scriptures to be read?  Joel Osteen assures me the scriptures are to be read in a way that means God wants me to be rich.  Not spiritually rich (although that comes as a concomitant), but materially rich.  Fundamentalists assure me the scriptures must not only be taken literally, but soteriologically, in that only those who read scriptures as they do will escape damnation and eternity in a lake of fire.  There are other methods of interpretation, such as Brueggeman's.

And if you listened to that entire lecture, you got to the Q & A at the end, where Brueggeman ended with some harsh words for historical criticism of the very kind he did in his younger years (I have his books).  Well, his work was certainly informed by that 19th century scholarship; but his critique is not off-base, either.  His real target was the idol of historical criticism, probably including the Jesus Seminar, that seminaries and seminarians (i.e, pastors) tend to make of their education and their seminary experience.  Idols have always to be torn down and tossed aside.  Therein lies the perpetual problem of religious communities (and all communities), and the perpetual need to, as Brueggeman also says in that Q & A, to return to the scriptures.  He takes on there a campaign popular in the UCC in 2007, that "God is still speaking."  His reference to the comma is to a phrase the campaign attributed to Gracie Allen, of Burns & Allen fame:  "Never put a period where God has put a comma."  Brueggeman is right:  you can't treat that comma is if everything before it was now irrelevant and unnecessary.

So how are the scriptures to be read? On-line atheists proof-text them for stories of calamity and horror that disturb their delicate sensibilities, to "prove" something is wrong there; although what is wrong depends on who is looking and what they think they are finding.  Does such a search determine the utility of the scriptures?  Well, it does for the group doing the proof-texting; but for the rest of us?  Not so much.

Consider the matter of art.  It is only recently that Van Gogh has become one of the great artists.  I can still remember when he was more attempter than succeeder, more an effort than a goal achieved.  Now he is praised as one of the greatest ever.  Within my lifetime a sufficient number of experts have agreed that Van Gogh's work has "something important to contribute to the domain of art."  And we all agree because Van Gogh's work is at least representational.

I'm planning to go to a Rothko exhibit at the museum next week, before it closes.  I've been wanting to go because the only other place I can see Rothko's work whenever I want is the Rothko Chapel, and frankly, I find the experience there wanting.  I want to see more of his work and learn why I should appreciate it better.  Will I be convinced that Rothko has "something important to contribute to the domain of art"?  If so, will that mean that I finally understand Rothko's oeuvre?  Or will it just mean I finally accept the reasoning of the consensus of the community concerned?

The latter is not a failing.  Art is not objectively "good" or "bad."  Neither is science, though we act today (in some circles) as if it were.  Maybe we need to bring back the trope of the "mad scientist."  It might be a useful corrective again.

There is a Brueggemanian (at least!) challenge addressed to the people Thomas Frank is describing in his concluding paragraph quoted above.  The challenge is to the idea of "established expertise."  Brueggeman would personify that as "Solomon."

The interesting thing about Solomon is how little we know about him, yet how much we admire him for what he told us he was.  He was wise, was Solomon; and he had all the scholars in his employ to say so for him.  We think of him dividing the baby (when he never meant to); we don't think of him as an arms dealer, trading with other nations in order to create power for Israel, and shifting arms north and south between Judah and Israel in order to make money on these transfers for his coffers.  The only other time we think of him is the one Brueggeman mentioned; in connection with Jesus and the lilies.  As Brueggeman says, we miss the point of that one rather badly.

The consensus is wrong.  But consensus gets entrenched; it becomes difficult to dislodge.  Read the "featured comment" at that Frank article; it ends with a rejection of that paragraph on Van Gogh because, it argues, Van Gogh was clearly and objectively great, it just took time for the world to realize it.  Is art so clearly objective and true?  Are the great sculptures of Greece beautiful because we put them in museums?  Or do we put them in museums because they are beautiful?  What about primitive art, or the African art that inspired Picasso and early 20th century Paris?  Not beautiful because it is not Grecian?  Beautiful in spite of not being Western?  Beautiful because it is the work of human hands?  What is beauty, except what we agree on at any one time, in any one place?

As I say, when I was young Van Gogh was considered good; now he is considered one of the greatest ever.  What changed?  Van Gogh's work; or our consensus?

We should not sneer at the consensus; but neither should we worship it.  We can make an idol of consensus, just as fundamentalists (IMHO) make an idol of the scriptures, even as they make it over in their own image by doing so.  It's that kind of idolatry Brueggeman is warning the UCC General Synod against at the end of the Q & A following his remarks.  Consensus makes us think the historical school of Biblical criticism is the only exegetical approach pastors can offer their congregations.   Consensus makes us think Solomon was a Very Good Guy.  Consensus makes us miss the point of Jesus' statement to his disciples about the lilies and the raiment of Solomon.  Consensus can make us miss the whole point of the Scriptures, the entire reason why they are still important after so many millennia.

The consensus, after all, tells us what we are naked; and hungry; and we really should make that our ultimate concern.

He said to his disciples, "That's why I tell you:  don't fret about life-what you're going to eat--or about your body--what you're going to wear.  Remember, there is more to living than food and clothing.  Think about the crows:  they don't plant or harvest, they don't have storerooms or barns.  Yet God feeds them.  You're worth a lot more than the birds!  Can any of you add an hour to life by fretting about it?  So if you can't do a little thing like that, why worry about the rest?  Think about how the lilies grow:  they don't slave and they never spin.  Yet let me tell you, even Solomon at the height of his glory was never decked out like one of these."--Luke 12:22-27, SV.