"That's how the light gets in" 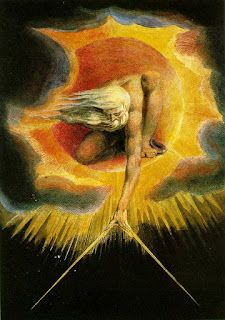 Lord knows I can drum things right into the ground, turning the most gossamer of butterfly thoughts into lead weights and depleted uranium-heavy meditations which are toxic in their own right.  So I'm going to try to leave this one as untouched as the original consideration, and see what I can do with it later (probably nothing, given my track record and jackdaw mentality, i.e., the pursuit of shiny things).

The "God of the gaps" used to refer (and for some still does) to God squeezed into the gaps in our empirical (not necessarily scientific) knowledge of the world, as if relating God to the world was of critical importance to believers.

To some believers that relationship is critical; then again, there are many paths to God, and that phrase doesn't just mean many approaches through world religion.  The beliefs of a Mother Teresa aren't necessarily completely harmonious with those of a Jesuit Pope, and the theology of a poor mother in the barrio isn't necessarily the theology of a seminary professor at a Catholic seminary.

And which of these is right, and which is wrong?

There's been an outpouring of grief for famous people lately, to the point we can see it as narcissistic.

“Several factors are at work here: the cult of celebrity, a more emotionalized society and, indeed, a more fragmented and lonely society that uses public grief, however dubiously, to bond with strangers through collective tear shedding.”

The fragmented and lonely society is the touchstone.  "Bowling Alone" is how Robert Putnam described it.   If there is a "God of the gaps" in modern American society, it is mostly likely found there:  in the spaces between our social contacts; in the isolation we live in even as we connect on social media.

The isolation itself isn't new.  Annie Dillard describes it about her mother's life in the suburbs where Dillard grew up, the suburbs familiar to Baby Boomers who saw it reflected on their televisions every night.  These are the gaps we have made for ourselves, and now we want God to fill them.  Or we want something to fill them.  Which may explain both our grief when celebrities die, and our anger that religion no longer supports us.

And as if to oddly underscore my point, the Bernie Sanders campaign releases a wordless ad that plays "America" from the "Bookends" album, a Baby Boomer paean to lost innocence and the search for community:  "'Kathy, I'm lost," I said/Though I knew she was sleeping./"I'm empty and aching and I don't know why!/Counting the cars on the New Jersey Turnpike/They've all come to look for America."