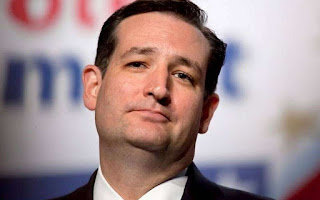 Backpfeifengesicht.  Yes, this whole post is for the excuse to use that word.*

I really have nothing to say about Ted Cruz, but the idea that some people think he should be President presents a real quandary.  Here is a guy who can't get along with anyone:

"Ted thought he was an expert on everything," says this campaign veteran, who asked not to be named. "He was a smart and talented guy, but completely taken with himself and his own ideas. He would offer up opinions on everything, even matters outside his portfolio. He was a policy guy, but he would push his ideas on campaign strategy. He would send memos on everything to everyone. He would come to meetings where he wasn't invited—and wasn't wanted." In fact, this Bush alum recalls, "the quickest way for a meeting to end would be for Ted to come in. People would want out of that meeting. People wouldn't go to a meeting if they knew he would be there. It was his inability to be part of the team. That's exactly what he was: a big asshole."

The Bush vet goes on: "I don't know anyone who had a decent relationship with Cruz." And when Bush became president, his top campaign aides agreed Cruz should not be offered a job in the White House. "No one wanted to work with him," this source remembers. "George W. Bush couldn't stand the guy." This person adds, "It's a real quandary for Bush campaign people: Trump versus Cruz, who to vote for? And it would be a big quandary even if it's Cruz versus Hillary Clinton. That's how much they cannot stand him."


A guy who makes his reputation on not trying to get along with anyone, and yet he wants to be in charge of one of the world's largest bureaucracies, to be a leader of thousands and maybe millions of people (in government, I mean), a job where the only skill truly required of you is that you get along with people (How many pundits have denounced Obama because he won't invite Congressional leaders to lunch?), and the biggest selling point Cruz has is that nobody likes him?

How does that work, exactly?

I mean, I know people are supporting him precisely because he doesn't get along with "the right people," but in the end, how is that a selling point?  "I promise to piss everybody off for four years."  Really?

As a yellow-dog Democrat, I hope Cruz does win the nomination.

*Mother Jones says it translates to:  "face that should be slapped."