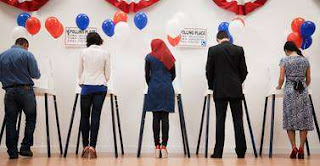 Hasn't polling made this superfluous?

Reviewing the on-line commentary it seems clear that, while not one ballot has been cast, not one hand raised at a caucus, not one delegate pledged, Trump has already won the GOP nomination.  And the consensus is still that Hillary has won the Democratic nomination, if only because Bernie is a socialist.  Or he's unelectable.  Or something.

Which means we've already moved on beyond August to November, and only the true believers and the true fearers think Trump could beat Clinton, so we're actually past November and into at least next January.  So here's the question:

With this much prescience available. why isn't anybody writing the post-mortem already about Hillary's first 100 days and the reception of her first SOTU address?

Or are we not polling on that until February?

And just to put this in perspective:

This is not just a recent phenomenon; Trump’s favorability ratings have been consistently poor. It’s true that his favorability numbers improved quite a bit among Republicans once he began running for president. But those gains were almost exactly offset by declines among independents and Democrats. In fact, his overall favorability ratings have been just about unchanged since he began running for president in June...

It’s a perplexing that Republican elites have resigned to nominating either Trump or Cruz when nine other candidates are running and no one has voted yet.


It doesn't seem to be just Republican elites, from what I've been reading; but it is bizarre.