Jus soli or just us? 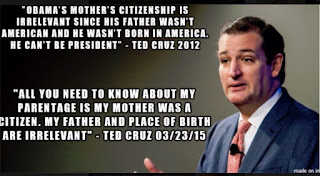 Turns out this isn't all that complicated:

In his emails to the Guardian, [Harvard Law Professor Laurence] Tribe discussed Cruz’s own approach to constitutional issues, noting that under “the kind of judge Cruz says he admires and would appoint to the supreme court – an ‘originalist’ who claims to be bound by the historical meaning of the constitution’s terms at the time of their adoption – Cruz wouldn’t be eligible because the legal principles that prevailed in the 1780s and 90s required that someone be born on US soil to be a ‘natural born’ citizen.”

It's that last sentence that brings up the argument of Mary Brigid McManamon.  First, let's let Tribe finish his discussion:

“On the other hand, to the kind of judge that I admire and Cruz abhors – a ‘living constitutionalist’ who believes that the constitution’s meaning evolves with the needs of the time – Cruz would ironically be eligible because it no longer makes sense to be bound by so narrow and strict a definition.”

Tribe said: “There is no single, settled answer. And our supreme court has never addressed the issue.”

McManamon strikes a middle course between Tribe's extremes of originalist and "living constitutionalist," and even admits that a strictly historical reading might be too narrow to serve as the basis for a sound judicial opinion.  But if we examine the historical record....

As McManamon points out, the Supreme Court has looked to the common law to define phrases used in the Constitution (ex post facto; bill of attainder; etc.) which are not defined in that document.  As Tribe points out, the Supreme Court has never addressed this particular issue, so it's reasonable to presume the Court would at least start there to understand what "natural born citizen" was supposed to mean in the late 18th century.

Much has been made of her reliance on Blackstone, but really her argument only uses his Commentary to set the baseline for citizenship by birth.  The first statutes making children of British subjects themselves subjects at birth, wherever birth occurred, were limited to Protestants.  The 1773 revision of the 1731 statute required the children to move back to England, take the required oaths, and receive communion in the Church of England or a Protestant or Reformed Congregation.

And then her argument gets interesting.

In 1789, [James Madison] indicated that the United States followed the common law notion of citizenship. On May 22 of that year, in a speech to the House of Representatives, Congressman Madison declared: “It is an established maxim that birth is a criterion of allegiance. Birth . . . derives its force sometimes from place, and sometimes from parentage; but . . . place is the most certain criterion; it is what applies in the United States . . . .”

And there's this, too:

William Rawlea member of the Pennsylvania Constitutional Assembly and the first United States Attorney for the District of Pennsylvania agreed. He produced a scholarly treatise on the Constitution and released a second edition in 1829.  He stated that location dictated the meaning of the phrase and concluded that “[u]nder our Constitution the question is settled by its express language, and when we are informed that . . . no person is eligible to the office of president unless he is a natural born citizen, the principle that the place of birth creates the relative quality is established as to us.”

James Kentthe well-regarded chancellor of New York98also asserted that the United States distinguished between “natives” and “aliens” by using the “ancient English law” or the “common law.” In the first edition of his Commentaries on American Law, originally published in 1827, Kent averred: “Natives are all persons born within the jurisdiction of the United States.”  In the third edition, published in 1836, he added: “They are what the common law terms natural-born subjects.” He further explained that “[a]n alien is a person born out of the jurisdiction of the United States,” with the exception of “the children of public ministers abroad.”


The odd numeral in there is a footnote I couldn't delete.

And as for the argument that the First Congress clarified the Constitution's language in 1790, not so fast:

The very existence of this provision demonstrates that the early American notion of “natural born citizen” adopted the English common law only and did not include the eighteenth-century statutes. If it had been otherwise, there would have been no need for the 1790 statute because the children covered would have been natural born under then-current English law. As one nineteenth-century senator stated: “[T]he founders of this Government made no provisionof course they made nonefor the naturalization of natural- born citizens.”

Moreover, the legislative history suggests that the first Congress intended to effectuate a change in the law, not merely to declare the status quo.  On February 3, 1790, Congress began debating a draft bill that provided for naturalization. The legislature acknowledged the common law principle that “[a]n alien has no right to hold lands in any country [but his own].”  However, there was no real opposition to “let[ting] foreigners, on easy terms, be admitted to hold lands” in America. One of Congress’ greatest concerns was the prospect of all those immigrants pushing their way into the budding nation’s new government.

Did Congress [in the 1790 Act] mean to amend the requirements of the Clause statutorily? As aforementioned, the Framers constitutionalized the common law concept of natural born citizen. Under the common law, “[t]he first and most obvious division of the people is into aliens and natural-born [citizens].”  In other words, everyone is either an alien or a natural born citizen based on his or her place of birth; that status does not change. Article I grants Congress the power to naturalize, that is, “remove the disabilities of alienage.”  However, Congress does not possess the alchemical power to convert one’s status from alien to natural born citizen.  If truly Congress’ intent, such a result would expand the requirements of Article II without a constitutional amendment.

Lastly, regarding the issue of the 14th Amendment and how it expresses the ideas of citizenship and naturalization, there is this from the Supreme Court in 1898 (U.S. v. Wong Kim Ark):

The Fourteenth Amendment of the Constitution . . . contemplates two sources of citizenship, and two only: birth and naturalization. . . . Every person born in the United States, and subject to the jurisdiction thereof, becomes at once a citizen of the United States, and needs no naturalization. A person born out of the jurisdiction of the United States can only become a citizen by being naturalized . . . by authority of Congress, exercised either by declaring certain classes of persons to be citizens, as in the enactments conferring citizenship upon foreign-born children of citizens, or by enabling foreigners individually to become citizens by proceedings in the judicial tribunals, as in the ordinary provisions of the naturalization acts.

Tribe argues that is doesn't make sense to be bound by so narrow and strict a definition; then again, the Ark decision notes that there are only two sources for citizenship in the U.S.  Shall we abandon the distinctions altogether?  Naturalized means made a citizen by law, not by birth.  Ted Cruz is a citizen by statute, not by the 14th Amendment.  Ambassadors and soldiers in hostile armies, McManamon points out, could have children who were citizens by birth even under the English common law.  That would apply to George Romney and John McCain; but it wouldn't apply to Ted Cruz.  But does that mean Cruz is ineligible to be President?

I don't know.  Josh Marshall assembles a set of lawyers who don't think the case is a simple one.  And all of this makes me agree with former Justice Scalia law clerk Michael Ramsey: “It’s a mystery to me why anyone thinks it’s an easy question.”