You say you want a revolution.... 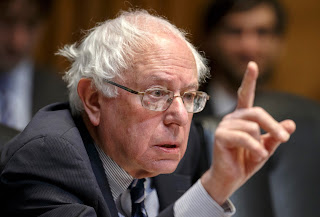 I have to admit, I kinda hope Nate Silver is right:  if Bernie loses Iowa, it's pretty much over for him.

Bernie's idea of a revolution seems to be pursuing the single-payer medical care most of the industrialized world has.  I'm not sure he even thinks that's revolutionary, but it's a concrete proposal so I assume his supporters think it will spark the revolution they desire.  It's a pipe dream, although it shouldn't be.  I remember when Clinton tried it; hell, I almost remember LBJ getting Medicare passed.  Ronald Reagan and the AMA inveighed against that one, to no avail.  But the dirty little secret of Medicare is:  it's for old people, which is why it finally passed.

We're very sentimental, we Americans.  We love our old people.  I remember when Medicare funding and SS funding were boosted, in the '80's.  There was a memorable scene on "Hill Street Blues," I think it was:  two officers on patrol go to the apartment of an elderly couple living in poverty, eating dog food.  It was the portrayal of the argument for expanding funding:  our elderly shouldn't live in poverty eating dog food because they have to choose between food and medicine, the rent and the doctor.

We love our old people.  Just like some of us fanatically love fetuses.  But once born, and not yet old, you're on your own, Bub.  Try not to get into trouble, it'd be a shame to lock you up.  Poverty is your fault; at least until you're old, and go from middle class comfort to poverty.  The middle class doesn't identify with the poor, but it fears poverty for itself.

So it would take a revolution to get single-payer in America.  I'd like to see it; but I don't see it now.  LBJ is our exemplar of what a progressive President can do if he puts his mind to it, and has formidable legislative skills.  Bernie Sanders is no LBJ.  Then again, Eisenhower got a Civil Rights Act passed in 1957, largely because of Brown v. Board and the boycott in Montgomery that led to the civil rights movement.  The civil rights movement continued, and JFK proposed a new Civil Rights Act.  He died, and LBJ made it JFK's memorial; but the most important part of that legislation was language to implement the 15th Amendment.

The Constitution is not active law; it doesn't dictate anything.  It says what can't be done ("Congress shall make no law....") but the courts decide what "no law" means.  The courts decide what due process and equal protection of the laws means, too.  The 15th Amendment says:

Section 1. The right of citizens of the United States to vote shall not be denied or abridged by the United States or by any State on account of race, color, or previous condition of servitude.
Section 2. The Congress shall have power to enforce this article by appropriate legislation.

But now the Supreme Court has gutted it.

The Civil Rights Act has largely served its purpose.  It doesn't need to be repealed, but neither is the Court likely to gut it any time soon.    We've accepted the rules and regulation it imposed upon us, and learned to better subjugate our racism (which it could never eradicate anyway).  The Voting Rights Act proved more problematic, at least for those it regulated.  Thanks to the Supreme Court it is largely an empty promise now.  It was more important than the Civil Rights Act, and it's gone.

Who mourns for it?

A true revolutionary would champion a new Voting Rights Act, one that would pass Supreme Court scrutiny.  Who is calling for that?  What will Bernie Sanders do about that?  What could he do about it?  The Congress isn't interested in it now; does anyone expect they will be in 2017?

You say you want a revolution?  Well, you know:  we all want to change the world.  But change it where?  And for what?

I'm not tagging this on Bernie Sanders; I'm putting it on his most fervid supporters, the ones convinced any analysis of the Senator's electoral prospects which don't say "And then a miracle occurs!" is pro-Clinton propaganda trying once again to squelch the Vox Populi with the heavy hand of the evil "establishment."  (Honestly, I haven't heard that term tossed around so much in political discussions since I was a teenager.)

The criticism made of Obama is that he wasted his Democratic majority in Congress fighting for health care reform, when all he could get was the ACA (which has helped more people than it has hurt, but no matter; it wasn't perfect, it didn't transform us into the envy of Canada).  Would Sanders even have such a Congress, and would it be a waste if he couldn't get single-payer passed?  (And does anybody imagine Sanders would emerge from a chrysalis to become LBJ-redux once he took his hand off the Bible?).  LBJ had enormous public support for the changes in law he managed, most of that to do with movements which stretched back a decade or more before he stepped behind the desk of the Oval Office.  Where is the movement equivalent to the civil rights workers for single-payer?

Where, in fact, is the movement to recover the Voting Rights Act?  Where is the revolution that is going to lead to anything?

There was revolutionary fervor in the Sixties, which was supposed to end the Vietnam War and promote liberal politics, especially when 18 year olds got the vote.  The first national election after that amendment was added to the Constitution, Nixon defeated McGovern in the greatest landslide in American history.  Nixon was a despised (by the young) symbol of the war, McGovern was the "anti-war" candidate.

There has yet to be an electoral revolution, period.

That's not why we elect Presidents, in fact.  We elect them to be a steady hand and a firm protector and to represent our nation among the nations.  We don't elect a revolutionary to lead the government in turning itself inside out and changing from root to branch.  That's simply not the role of the office.  Many of us were told this in seminary: that you don't become a church's pastor in order to upend that church and remake it in your image (If a revolutionary president doesn't remake the government in his/her image, whose image would it be done in?).  I knew two pastors who tried that high ideal:  one entered the pulpit from a seminary career, the other from decades in the church's national office.    They returned to the pulpit to put their radical ideas into practice.  Both had stormy, brief-lived tenures.  All my seminary professors who warned us against such perils were themselves former pastors who found academic life far more suited to their talents.  No church picks a pastor to upset them; they pick a pastor to shepherd them.

Shepherds don't upset the flock, and don't try to change everything about it.  Shepherds are not revolutionaries.

The President is not the National Shepherd, but neither is the President elected to be the national firebrand, the vanguard of a revolution which will remake the American government in his supporters ideal image.  That's the goal of the Tea Party.  That's the cry of Louie Gohmert and Ted Cruz and every oppositional Representative and Senator in Washington, D.C. today.

Why on earth would the country want someone like that in the White House?

Bernie Sanders isn't even running as that person; but his supporters act like he is.  And they are going to be very disappointed if Nate Silver is right and a failure to win in Iowa marks the beginning of the end of Sen. Sanders' campaign.

Then again, they'd be even more disappointed if he won in November.  Not in November; but not long after.