Hail To The Thief 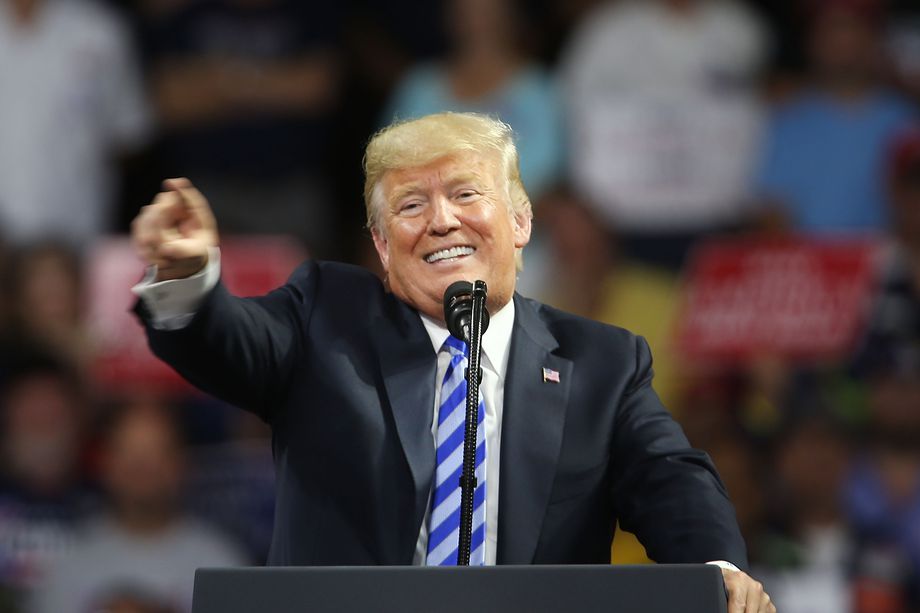 Why is this man smiling?

Once more with feeling:

The fear in Trumpworld is that Mueller may have laid a perjury trap for the president, the former staffer said. Mueller waited until after Trump submitted written answers under oath to the special counsel’s office—some of which reportedly included responses to questions about Trump Tower Moscow—before revealing the evidence prosecutors had gathered to secure Cohen’s plea. “Trump was totally caught off guard by the Cohen plea,” the source said.

Indeed, Trump’s erratic responses suggest he was surprised by the news. At first, his lawyer Rudy Giuliani released a blistering statement saying Cohen is “a proven liar who is doing everything he can to get out of a long-term prison sentence for serious crimes of bank and tax fraud.” In comments he made to reporters before departing for the G20 summit in Argentina, Trump called Cohen “weak” and accused him of “making up a story.” But hours later, Giuliani changed tacks, telling The New York Times that Trump’s sworn answers to Mueller matched Cohen’s version of events. “Why would the president come out and say Cohen lied?” the former staffer said.


There is no such thing as a "perjury trap."  The idea may sound clever on FoxNews, but in the real world (where Trump's aides obviously don't live, either), it's a chimera, as real as Santa Claus or "Fake News!" (well, that's a real thing, too, but not the way Trump means it).  You can't get caught in a perjury trap if you don't lie, and even if Trump's written statements don't line up perfectly with Cohen's 70 hours of testimony, it doesn't mean Trump committed perjury.

Although for a guy who lies where most people would hold a simple conversation, he probably did commit perjury.

What's most telling here is the incoherence of Team Trump.  Trump was "caught totally off guard by the Cohen plea"?  Why? Is he that blisteringly stupid?  I'm not even paying that much attention to this (my family and my career don't hang in the balance, not to mention my liberty from prison), and I wasn't surprised by today's news (besides, it's Cohen's second guilty plea.  Did Trump think there was only one per customer?).  And then Giuliani berates Cohen as a liar (never a good defense, as I said, when your client is Liar-in-Chief), and then they realize:  "Why would the president come out and say Cohen lied?"  Except that horse left the barn 10 hours ago (as I write).  Now they decide that's not a good look for them.

Apparently Manafort's back-channel and Whitaker's undoubted daily reports were not as clarifying as the President thought he deserved (it is his DOJ, after all, amirite?):

In the days leading up to Cohen’s plea, Trump’s legal team had grown increasingly annoyed with the special counsel’s office for stonewalling. Giuliani vented to a friend that Mueller’s office stopped communicating with him after he delivered Trump’s answers. “They’ve gone dark,” the friend who spoke with Giuliani said. “Rudy is extremely frustrated. He thinks Mueller is acting like some junior U.S. attorney who’s got his panties in a wad and doesn’t want to talk to you.” Giuliani also complained that Mueller is delaying submitting his report to the Justice Department until the Democrats have taken control of the House of Representatives in January. (Giuliani did not respond to a request for comment.)

Somebody tell Rudy that elections have consequences, as do attempts to take over the DOJ by firing the AG and replacing him, in violation of all legal standards and probably the Constitution, with a glorified aluminum siding salesman who is so in over his head he's the one who's "gone dark" (anybody heard from Whitaker lately?).   I've seen lawyers do things like this in civil lawsuits where the only consequence was money.  I'm not at all surprised to see it in the highest of high stakes criminal investigation.

And now, of course, we're supposed to believe Cohen was Trump's Avenatti, taking on authority to initiate transactions with no direct authority from Trump, and no communication with Trump about what he was doing (see below, if you haven't heard).  Jeffrey Toobin is right:  the responses to Cohen's evidence from the White House and supporters is "preposterous."  I also agree with Toobin on this:

“Today is the first day I thought Donald Trump might not finish his term in office,” Toobin said in response to the shocking news dropped earlier in the day regarding the guilty plea of his former attorney Michael Cohen.


And then this, just for lagniappe and as Trump makes his way to Argentina:

President Donald Trump’s company planned to give a $50 million penthouse at Trump Tower Moscow to Russian President Vladimir Putin as the company negotiated the luxury real estate development during the 2016 campaign, according to four people, one of them the originator of the plan.


Christmas is coming early this year.