What If They Had a Crisis and Nobody Knew? 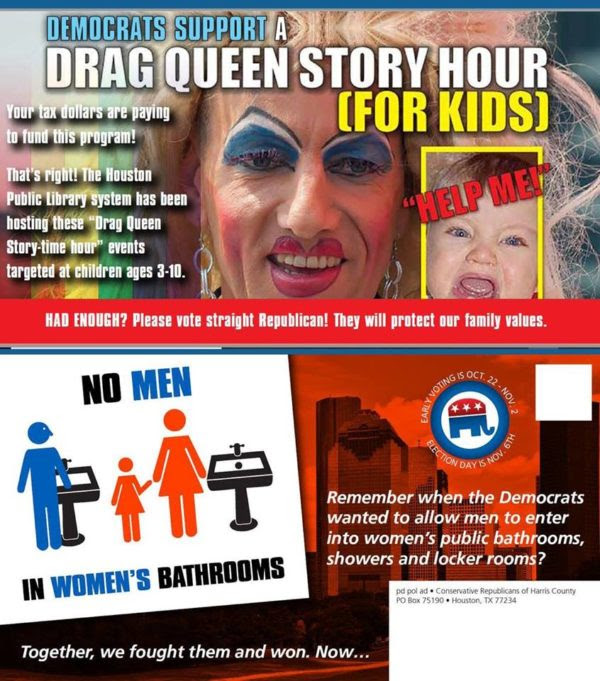 Actually got this flier in the mail.  It's hilarious, especially the crying baby in the box.
Proof positive the GOP is confident of their triumph on Tuesday.

"Epistemic--of or relating to knowledge or knowing."  Webster's

You can chase it into the Stanford Encyclopedia of Philosophy if you want; I wan't that curious.

Vox says that the "caravan" in Mexico and Trump's response with calling up troops presents an "epistemic crisis" in America.  Really?

First, let's be clear:  Trump hasn't called up 15,000 troops.  Last I heard he'd called up 800, and later threatened to send up to 20,000.  The DOD says 5200 troops are due to the border; Texas already has 1000 of them.  That's a lot of people ready to impede the progress of a few thousand (at best, by then; attrition on a walk from Mexico City to the Rio Grande, or worse to Tijuana, is going to be brutal.  2000, reportedly, have already decided to stay in Mexico) men, women, and children walking across the Sonoran Desert, who probably won't get here before Christmas. Imagine the images of people being shoved into the Rio Grande or blockaded on bridges at Christmas.  I would almost pay Trump to set that news footage up.

Trump also said he was going to have a military parade to rival the one he saw on Bastille Day.  Heard any more about that?

I mean, he said this:


Sadly, it looks like Mexico’s Police and Military are unable to stop the Caravan heading to the Southern Border of the United States. Criminals and unknown Middle Easterners are mixed in. I have alerted Border Patrol and Military that this is a National Emergy. Must change laws!
— Donald J. Trump (@realDonaldTrump) October 22, 2018

Which is a little hard to do, since the Congress won't be back in session until November, and then it'll be a lame duck session no matter what the electoral outcome.  And besides, new laws won't put a magic shield down 2000 miles of border making sure no brown person invades Trump's white America.  So it's a bit hard to take this seriously, even when Trump says:

A) it already has been mobilized, in the form of the National Guard.  B)  what does this mean in terms of actual numbers, deployment, etc.?  5000? 10,000? More? Nobody seems to know; but everybody seems to be upset.

Well, everybody in Washington, anyway.  Google shows a couple of on-line polls asking what I think about troops on the border, but no reports of polls with information about how this is affecting the electorate.  Republicans, of course, insist the country is behind them on this and the GOP will rule because of it.; but then they would, wouldn't they? I suspect the people already freaked out about brown people below the Rio Grande are still freaked out; and the rest of us find this rather ludicrous, or aren't paying attention at all.

So where's the epistemia of the crisis?

I mean I'm sure this is driving advertising and e-mails and text messaging on the GOP side, but I'm not picking up anything about it on the Democratic side here in Texas, not even at the level of the Senate race.  The GOP down here is still talking about "socialist Democrats" who want to "abolish ICE" (that's so two months ago!  Come to think of it, so is Kavanaugh.  I don't think anybody even remembers he's on the bench now.)  Vox argues effectiveness doesn't matter because there's a performative aspect here:  believing the invasion is coming because it is absurd is a bonding experience for the right.  And yet, beyond references to FoxNews (who repeats everything Trump says and immediately makes it gospel and eternal truth all right thinking people have known since God was born), there's no evidence for this.  Just the certainty that it must be so because, how else did Trump win in the first place?

And there's the displacement.  The whole country went into the shock SNL mocked the Saturday after the election 2 years ago.  Many people who despised Trump, sure he couldn't possibly win, couldn't bring themselves to vote for Hillary.  We still haven't figured out that government by default is not better than government by involvement, and we got what we didn't wish for, but didn't vote against, either.  For two years voters have been waiting to correct their mistake; but in those 2 years Trump has been President and the GOP Congress has been supportive, and everyone kept expecting the hero to ride in and save us from ourselves like always happens in horror movies and shows where the bad guy is winning....and it didn't happen.  So now Trump must have some numerical base of power which will rise as a tide and swamp all democratic (yes, small "d") boats and we will remain in the place of wailing and gnashing of teeth for another 2 years, at least.  Trump won; he's the President; the Presidency is powerful; ergo, Trump is powerful and must be winning:  QED.

Except, as I say, Trump never got his military parade; because the military didn't want to waste money like that, or time, or personnel, or materiel; and so they didn't.  Trump hasn't gotten a lot of things he insists he wants, and when this Administration is finally over, the lasting image of it is going to be the number of times (I can think of 3 off the top of my head) Trump walked into a room, talked to the cameras, and walked out again, having failed to sign the piece of paper he was in the room to sign in the first place.  Yeah, they get signed eventually, but he couldn't care less.  He doesn't want to govern, he wants to be praised.  He doesn't want to work, he wants attention.  He doesn't care if the caravan ever gets to the state of Tamaulipas.  He only cares about the attention.  His epistemic crisis is knowing he's about to lose the House, and maybe even the Senate, and the shit is going to hit the fan.  But he doesn't even care about the shit or the fan; he cares about being labeled a loser, so he's preparing to blame the loss on the GOP.  The epistemic crisis is not national; it's coming from inside the White House.

Is Trump's strategy working?  All the pundits seems to think so.  GOP politicians don't.  Late night comedians point out the GOP is so unpopular they had to resort to a racist scam to drum up votes.  In North Dakota, the state legislature's attempt to defeat Heidi Heitkamp by keeping Native Americans from voting has prompted them to respond in record numbers with determination to be able to vote on Tuesday.  Early voting in the first 10 days in Texas has exceeded the entire turnout for 2014 in Texas.  Texas is usually 50th in voter turnout, yet 4 million Texans have voted in the 30 counties with the most voter registrations in the state.  Trump got 7000 people to come to Houston to hear him.  Even if all 7000 were registered voters in Texas, who would notice in a sea of 4 million?  Beto got 55,000 to come to Austin.  If even half of them voted, that 7000 is already underwater.  The heavy vote turnout is not because Trump has become so popular in Texas (according to 538 he hasn't been popular anywhere since the election).  The rise is in what have always been non-voters, the very people Trump is not reaching out to. The young person vote is up 500% in Texas.  Yet that doesn't matter, because:  reasons.  I heard it again this morning, from two local political science professors who regularly opine on the local NPR station.  Texas is not a blue state or a red state, it's a non-voting state, regularly 50th in voter turnout.  The GOP is a minority part in the country, even in Texas, and yet no one votes against them, so they dominate.  The last time voter turnout was high in Texas, Democrats won.  Voter turnout in Harris County is already almost 100,000 votes higher than the vote total in 2014.  Even Fox News admits that's "presidential-type" turnout for Harris County; but none of that is enough, these professors say.  Why?  Polls, of course, which may not be measuring the number of young people who are turning out; or Latinos; or blacks.    It is well known Republicans are the minority party nationally, but "enthusiasm" is up for the GOP, too, we are told nationally.  That must be true for Texas, right?  And enthusiasm among GOP voters means enthusiasm among Democratic voters means nothing, because:  reasons.  Certainly not numbers, just:  reasons.  That 500% increase in young voters, voters who have no idea why they should fear Communism or Drag Queen Story Hour, will be swamped by the enthusiasm of over 65 GOP voters, I'm sure.  And yet the early vote turnout keeps increasing, and the number of young voters and new voters keeps increasing; but nothing can ever change because blood red Alabama has to elect Roy Moore no matter what.

Epistemic crisis?  I think that's going to be the term for the GOP next Wednesday morning.

If it isn't, well, all the troops in the entire military won't make a difference to the fate of the nation then.