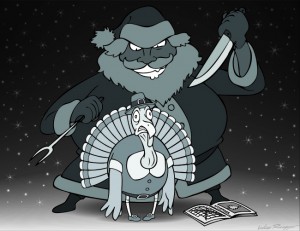 *the period of time between Thanksgiving and Christmas, when a great variety of morbid symptoms appear, as Gramsci predicted.

So here we go again:

The fact of the matter is that the purposes religion serves in America are shrinking in number. Our cultural identity is increasingly shaped by pop culture, not faith or ethnic identity. Our holidays are more about shopping and having a chance to catch up with far-flung family these days, not showing devotion to a deity. Spiritual needs are often addressed through modern means like psychotherapy and self-help. People build communities through hobbies and interests more than through faith communities bound by geography, ethnicity and family.

Increasingly, the only thing religion has left to justify itself is that it provides cover for people who want to have bigoted, selfish beliefs but want to believe they are good people anyway. As these social trends continue, we can expect the alignment between public piety and grotesquely selfish political beliefs to get worse, not better.

I would say "ethnic identity" is not fading, except it really is subsumed by popular culture, which frankly provides as much "cover for people who want to have bigoted, selfish beliefs but want to believe they are good people anyway."  What's the old adage:  one finger pointing at me is three more pointing back at you?  Works pretty well on most such occasions.  Which is not to say the first paragraph is more right than wrong; but neither is that an improvement, or even a satisfactory replacement; although yes, religion has long been used to justify what any local culture prefers to find valid.  Gott mit uns, and all that.

Sorry; near violation of Godwin's Law there, and I've only just started.  Once again we're faced with the idea that religion is whatever evangelicals proclaim, with lonely Pope Francis standing in for any divergence from that singularity:

The prosperity gospel teaches, to be blunt, that you can tell how much God favors you by how rich you are. While some on the Christian right reject this idea as a tad crude, it’s still wildly popular and its adherents, like Oral Roberts, are some of the major architects and organizers for the Christian right. It’s a perfect example of how conservative ideology leads to pious Christianity. People want to believe that the rich are better than everyone else and the poor don’t deserve squat, so they find a way to blame God for it rather than own their own greed and selfishness.

Pope Francis may be entirely sincere when he says he wants Catholic clergy to deemphasize the right-wing political pandering in favor of highlighting values that are more in line with liberalism, such as compassion and generosity to the poor, but the odds are slim of this message making inroads with church leaders in the United States. The church needs conservatives who need to believe they’re good and holy people despite their selfish beliefs. Without them, who will show up and tithe? Liberals? Most of them are sleeping in on Sundays, secure that their commitment to social justice makes them good people regardless of how visibly pious they are.


I would not call what Joel Osteen preaches either "prosperity" or "gospel" ("good news"), but that's an inter-familial argument and not really at issue here (and the idea that God blesses the good is as old as Jesus, who was asked by his disciples "Who sinned, that this man was born blind?", and as American as Ben Franklin's aphorism "God helps those who help themselves."  I always took that as counsel to bad table manners rather than serious life advice.).  Interestingly the only counterweight to Osteen & Co. in the analysis is the current Pope; as if the UCC and the UMC and the Episcopal Church, and many others, simply don't exist in America.  Yes, the numerical majority may be with the evangelicals and fundamentalists (depending on how you categorize them, especially the non-denominational ones), but that's a rather Trumpian view (he only represents the ones who elected him; the only real Christians are the ones on TeeVee and in the headlines).  That's an old complaint with me, and a tiresome one.  (Oral Roberts, by the way, has been dead for 9 years.  His hospital turned to the city for help when he couldn't finance it; that was years ago, no idea what happened to it, but it pissed off a lot of people in Tulsa.  Prosperity, in other words, proved slippery.  It was a graduate of his eponymous university who was killed trying to get to that isolated island off the coast of India, probably the first time that University has been noticed in 10 years.  Just saying, the reference to Roberts is a bit dated.  Note, too, the assumption that the only true Christians are conservative ones; some of them criticize the "prosperity gospel," we are told.  The rest of us do, too, but we don't count, I guess.). Still, if we're going have an intelligent discussion, let's get the facts right.

But this isn't about intelligent discussion; the article in question, I mean, not my post here.  The purpose is that second paragraph in the first quote above:  that religion sux, is useless, and the sooner popular culture replaces it, the better.  Except I've seen what popular culture has to offer (slavery, racism, complete indifference to the poor and gleeful exploitation of them, consumption of the earth's resources without let or hindrance (God told Adam and Eve to take care of it, not to use it up and wear it out ASAP).  If that's all we have to look forward too, I pity my young adult daughter and would with to shuffle off this mortal coil soonest, the better to prove myself a "good man" (Donne, if you're wondering.  Blessings don't always come in material benefits among Christians.).  We have all Advent to discuss that; as well as the fact that Christmas ("our holidays" in the first quote; there's only one other with a vaguely Christian connection on the American calendar; the rest are distinctly sectarian) is honored more in sales than in service.

But I've discussed that before, too.  Maybe I need a new hobby.....