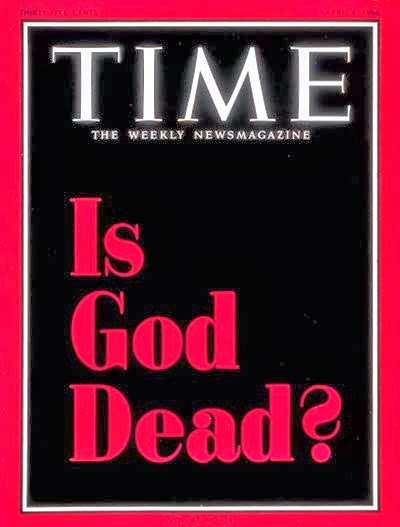 I haven't read the book (and don't intend to; life is too short), but according to the early reviews, Peter Watson's "intellectual history" The Age of Atheists starts with Nietzsche and ends with the three horsemen of the New Atheist apocalypse:  Dawkins, Dennett, and Harris.  Funny, that; starting with a philologist and influential philosopher, and ending with three dilettantes:

Thanks to such discoveries we will eventually be able to say, objectively, that there are right and wrong answers to moral questions, because once we put religion in its place, “[w]ell-being captures all that we can intelligibly value.”


Watson is referring to Sam Harris there.  Since he starts with Neitzsche, I wonder if Watson bothers to mention the "God is Dead" theological movement of the '60's, one inspired more by the late thinking of Bonhoeffer than by the mad German.  It was a movement trying to take seriously Bonhoeffer's idea that God was about to become irrelevant to the modern world; if so, the thinking went, maybe we can establish a "religionless Christianity" by accepting that God, or at least all the "old" ideas about God, are (is) dead.  I still think those ashes might be worth stirring, but I haven't seen anything indicate Watson took any interest.

As for this evaluation of Harris:  Thanks, but I've seen Omelas, and I don't want to live there.  Besides, I wasn't aware that any religiously grounded ethic was not based on what "we can intelligibly value."  The conflict, as ever, is over what those terms mean:  both "value" and "intelligibly."  And that has been true since at least Euripides' "Medea." But then we are dealing with remarkably ignorant men:

Harris argued from the failures of the kibbutzim in Israel that some forms of social life are less moral than others; that conservative societies have higher rates of divorce, teenage pregnancy and pornography; that it is societies whose members are allowed to maximize themselves and others that are the most successful changing morally, and improving, he emphasized—for instance, we are less prepared than we used to be to accept collateral damage in conflict situations.


Harris as sociologist makes out no better than Harris as philosopher, or as observer of current events.  I'll notify the people of Pakistan immediately that the drone strikes have stopped because Americans are now too moral to accept the casual deaths of foreigners.  As soon as that actually happens, anyway.

One of his prime conclusions was that “there may be nothing more important than human cooperation.”


Honestly, this is so stupid it's criminal. This is not an argument, it's the plea of Rodney King:  "Why can't we just all get along?"  Except for Harris, the plea is followed by "Kill all the noncooperators!  That'll fix it!"  And no, I'm not exaggerating.  This argument is also pretty much the claim of everyone from the Roman Empire to 20th century fascism and communism.  The only problem is when some people think there is something more important than cooperation; and what do we do with those troublemakers?  Then again, Harris doesn't seem to have much problem with imperialism, so long as it is on his side.  But from a purely practical point of view, cooperation is the problem; how, precisely, do we attain it?  (I also think Watson's reading of Harris and Dawkins is absolute bunkum; but that's yet another matter.)

As for "improving" morally; don't make me laugh; especially since Harris clearly thinks all Muslims and Christian fundamentalists present a clear and present danger, and should be wiped from the face of the earth.  All in the name of being morally superior, of course.

Gee, who else has taken that stance against other groups of people within living memory?  Sit down, Mr. Godwin, you aren't needed here.  The thing speaks for itself, as the lawyers say.

Dawkins then went on to quote from his colleague Peter Atkins’s book The Second Law(1984) [i.e., of thermodynamics]: “We are the children of chaos, and the deep structure of change is decay. At root, there is only corruption, and the unstemmable tide of chaos. Gone is purpose; all that is left is direction. This is the bleakness we have to accept as we peer deeply and dispassionately into the heart of the Universe.”

“If there were no eternal consciousness in a man, if at the bottom of everything there were only a wild ferment, a power that twisting in dark passions produced everything great or inconsequential; if an unfathomable, insatiable emptiness lay hid beneath everything, what would life be but despair?”

Been there, done that, gone through it with Nietzsche, Kierkegaard, Beckett, Sartre, and Camus.  A.N. Wilson covered it in popular form in 1999, for pity's sake.  Watson's book is supposedly a history that takes this all into account, at least according to the reviews.  How can anyone seriously argue that Dawkins, Dennett, and Harris are blazing a new path, except  to do so from truly benighted ignorance?

G.E.Moore.  Aristotle.  Boethius.  Cicero.  I can name philosophers ancient and modern who have essayed systems of ethical behavior without reference to religious beliefs or mores, and I haven't even touched on Eastern philosophy.  Per the reviews, Watson can, too; but there's nothing of that in this excerpt.  Why do these "atheists" insist they have just now discovered fire and invented the wheel when all they have is disdain for an imagined "other" and a philosophical tool as useful as a wet noodle?   I am convinced the only reason these people post and publish is to find someone they can look down on so they can feel superior.  Stenger conflates all religions with some version of Christianity he keeps in his head so he can stick pins in it, and clergy with theologians, a distinction and difference any clergy would insist on.  From Dawkins to Dennett to Watson they all seem to be fighting with the ghost of Jerry Falwell, when they aren't still wrestling with issues from the Victorian era (issues wrestled among public intellectuals, too; not so much among ethicists, theologians, or philosophers).  None of them want to engage a serious discussion (Dawkins likens knowing anything about theology or philosophy of religion to being well informed about fairies and unicorns).  All they do is parade their ignorance and set fire to straw men of their own imagining.

It's pathetic, really.  But it is also what passes for public intellectual discourse in America, where Stephen Pinker gets more regard than Noam Chomsky, and Daniel Dennett is more likely to be quoted than Jacques Derrida.

In the past few decades, both evolutionary biologists like Dawkins and cosmologists—physicists and astronomers—have mounted a spirited attack on the basic dimensions of religion, in particular the main monotheisms, and in doing so have tried hard to reshape what—for the sake of a better phrase—we may call our spiritual predicament.


Really?  We're doomed to repeat the 19th century all over again?  Or did you miss it the first time?  Because I think we've had that discussion, and by the 1920's it sort of came to a head, and we all moved on.

Or having learned nothing from history, are you determined to repeat it?

One of the comments at Salon refers to Pinker's assertions about the decline in violence in history as "Victorian triumphalism."  So maybe it's appropriate our public intellectuals are now atheists and philosophers who have the respect of the Victorians among us.  Frankly I always preferred Browning and Hardy over Tennyson.  ("Christmas:  1924" beats "In Memoriam" all to heck and gone for pungent insight; much as I still like portions of the latter.)  And I dare say this kerfuffle looks very serious to Very Important People, but the fact is the fears of Victorian England about a meltdown in social order were vastly overblown (and self-interested; those in power worried, as ever, about retaining their power) and the meltdown that finally came (thanks largely to World War I, which shattered the European ideal of decency and good order on the Continent) was well behind us all by the 1960's.

It's about time the "New Atheists" joined the 21st century, and quit wishing for the return of the 19th (is it any coincidence so many of the "leading lights" of the New Atheists are either British or products of elite East Coast institutions?).  And the sooner they actually learn half as much as Nietzsche knew, the better for the rest of us they insist on pestering.