And so this is...whatever you make of it 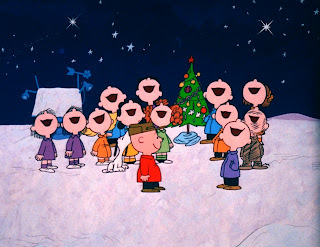 First, let me say there is no dearth of "old" Christmas carols (which were a type of song, not some Middle English religious term) available on recordings.  Both of the songs mentioned in this Slate article are known to me from the Kingston Trio's Christmas album (I have A LOT of Christmas albums), and the Windham Hill "Winter Solstice" series started out using expressly non-Christmas carols for its instrumentals (and the whole thing blew up when the songs got too specifically religious, and it was wrenched back to the original concept.).  Christmas carols, in fact, were delegated to a separate series of recordings called, yes, "The Carols of Christmas."

And then there's all the great stuff from Bach and the Baroque composers, Christmas music but not, by dint of unceasing play, "Christmas music," if you catch my drift.  And that's not to mention the medieval chant and polyphony (and forgive me for using those terms too loosely), as well as American and English "folk" songs, recorded by Anonymous 4 (I told you I had a lot of Christmas music), not to mention all the modern stuff about Rudolph and snow and horses.  Why, there isn't even a mention of the baby Jesus in the whole soundtrack to "A Charlie Brown Christmas."

My point being:  can we just go back to everybody enjoying Christmas as they wish to?  Religious, non-religious, atheist, agnostic, consumerist, pacifist, bread baking-ist (hello!); what have you-ist?

Charlie Brown is actually good instruction in this.  He's not cheered by the season, but nobody really knows why, or much cares.  Finally, when he snaps and Linus recites the nativity story from Luke, Charlie Brown feels better.

But it still ends with a festive Christmas tree, which is about as religious a symbol as the Easter bunny.  Does anybody feel cheated by that?

There was some "bonus" content at Slate, about an atheist enjoying a "godless" Christmas.  Yeah, whatever.  The next time every Protestant (i.e., non-Roman Catholic) church in America is open for regular worship when Sunday is also December 25th, we can talk about how "religious" a holiday Christmas is.

I know:  every year somebody insists we must put the "CHRIST" back in "Christmas."  I want to tell them we should put the "MASS" back in it, too.  I mean, fair is fair.

As for the music:  the group mentioned in that Slate article sounds interesting, if only because it prompts memories of medieval English tunes from a recording I used to listen to years ago on a radio station in Austin.  Still wish I'd chased down those albums when I had the chance.

I have A LOT of Christmas music, and the stranger the better.  French tunes are especially good, because they aren't as drummed into our ears as the English/America stuff is.  But honestly, whatever makes you happy.  All the attendant foofaraw surrounding Xmas is meant to be an expression of celebration, an exuberance of joy, a time for festivity.  If your idea of festive is food and drink and singing, I think the grown up baby born in the manger would join you.  If you don't want him there, close him out and get back to what you were doing.  If you don't think he would want to be there, then I have nothing more to say to you.

Keep Christmas; but keep it as you wish to.  There are no rules about this, and no one is policing you.  Religious as I am, I still laugh at the lighted plastic baby Jesus manger scenes I used to see in rural Illinois this time of year.  Something about shoving a 100 watt bulb up the backside of a plastic baby just REALLY brings Christmas close to a person.  It's also about as "religious" as our Christmas symbols get, so....

May it be unto you according to your faith.  Because everybody trusts in something.....