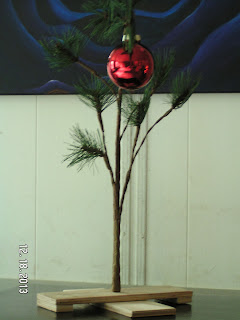 NPR told the story of people in World War II moved, perhaps even saved, by books.  One story was of a Marine hospitalized with malaria, who asked for a book from a nurse because he was bored.  The book he got was A Tree Grows in Brooklyn.  He wrote a letter to the author, Betty Smith, telling her how the book had changed his life, had made him recover his humanity.  He may not have been thinking of his passage in particular when he wrote, but the following is appropriate to the season; and I dare say he could have had this in mind, and it would have been sufficient:


There was a cruel custom in the neighborhood.  It was about the trees still unsold when midnight of Christmas Eve approached.  There was a saying that if you waited until then, you wouldn't have to buy a tree, that "they'd chuck 'em at you."  This was literally true.

At midnight on the Eve of our dear Saviour's birth, the kids gathered where there were unsold trees.  The man threw each tree in turn, starting with the biggest.  Kids volunteered to stand up against the throwing.  If a boy didn't fall down under the impact, the tree was his.  If he fell, he forfeited his chance of winning a tree.  Only the roughest boys and some of the young men elected to be hit by the big trees. The others waited shrewdly until a tree came up that they could stand against.  The little kids waited for the tiny, foot-high trees and shrieked in delight when they won one.

On the Christmas Eve when Francie was ten and Neeley was nine, mama consented to let them go down and have their first try for a tree.  Francie had picked out her tree earlier in the day.  She had stood near it all afternoon and evening praying that no one would buy it.  To her joy, it was still there at midnight.  It was the biggest tree in the neighborhood and its price was so high that no one could afford to buy it.  It was ten feet hight.  Its branches were bound with new white rope and it came to a pure point at the top.

The man took this tree out first.  Before Francie could speak up, a neighborhood bully, a boy of eighteen known as Punky Perkins, stepped forward and ordered the man to chuck the tree at him.  The man hated the way Punky was so confident.  He looked around and asked:

"Anybody else wanna take a chance on it?"

A spurt of derisive laughter came from the tree man.  The kids snickered.  A few adults who'd gathered to watch the fun, guffawed.

"Aw g'wan.  You're too little," the tree man objected.

"Me and my brother--we're not too little together."

She pulled Neeley forward.  The man looked at them--a thin girl of ten with starveling hollows in her cheeks but with the chin still baby-round.  He looked at the little boy with his fair hair and round blue eyes--Neeley Nolan, all innocence and trust.

"Shut your lousy trap," advised the man who held all the power in that hour.  "These here kids is got nerve.  Stand back, the rest of yous.  These kids is goin' to have a show at this tree."

The others made a wavering lane.  Francie and Neeley stood at one end of it and the big man with the big tree at the other.  It was a human funnel with Francie and her brother making the small end of it.  The man flexed his great arms to throw the great tree.  He noticed how tiny the children looked at the end of the short lane.  For a split part of a moment, the tree thrower went through a kind of Gethsemane.

"Oh, Jesus Christ," his soul agonized, "why don't I just give 'em the tree, say Merry Christmas and let 'em go.  What's the tree to me?  I can't sell it no more this year and it won't keep till next year."  The kids watched him solemnly as he stood there in his moment of thought.  "But then," he rationalized, "if I did that, all the others would expect to get 'em handed to 'em.  And next year, nobody a-tall would buy a tree off of me.  They'd all wait to get 'em handed to 'em on a silver plate.  I ain't a big enough man to give this tree away for nothin'.  No, I ain't big enough.  I ain't big enough to do a thing like that.  I gotta think of myself and my own kids."  He finally came to his conclusion.  "Oh, what the hell!  Them two kids is gotta live in this world.  They got to get used to it.  They got to learn to give and to take punishment.  And by Jesus, it ain't give but take, take, take all the time in this God-damned world."  As he threw the tree with all his strength, his heart wailed out, "It's a God-damned rotten, lousy world!"

Francie saw the tree leave his hands.  There was a split bit of being when time and space had no meaning.  The whole world stood still as something dark and monstrous came through the air.  The tree came towards her blotting out al memory of her ever having lived.  There was nothing--nothing but pungent darkness and something that grew and grew as it rushed at her.  She staggered as the tree hit them.  Nelly went to his knees but she pulled him up fiercely before he could go down.  There was a mighty swishing sound as the tree settled.  Everything was dark, green and prickly.  Then she felt a sharp pain at the side of her head where the trunk of the tree had hit her.  She felt Neeley trembling.

When some of the older boys pulled the tree away, they found Francie and her brother standing upright, hand in hand.  Blood was coming from scratches on Neeley's face.  He looked more like a baby than ever with his bewildered blue eyes and the fairness of his skin made more noticeable because of the clear red blood.  But they were smiling.  Had they not won the biggest tree in the neighborhood?  Some of the boys hollered "Hooray!"  A few adults clapped.  The tree man eulogized them by screaming,

"And now get the hell out of there with your tree, you lousy bastards."

Francie had heard swearing since she had heard words.  Obscenity and profanity had no meaning as such among those people.  They were emotional expressions of inarticulate people with small vocabularies; they made a kind of dialect.  The phrases could mean many things according to the expression and tone used in saying them.  So now, when Francie heard themselves called lousy bastards, she smiled tremulously at the kind man.  She knew that he was really saying, "Goodbye--God bless you."