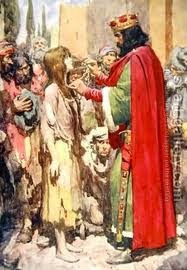 
Then a concern awakened in the king's soul. Who but a king who thinks royally would dream of such a thing! He did not speak to anyone about his concern, for if he had done so, anyone of his courtiers would presumably have said, "Your Majesty, you are doing the girl a favor for which she can never in her lifetime thank you adequately." No doubt the courtier would arouse the king's wrath, so that the king would have him executed for high treason against his beloved, and thereby would cause the king another kind of sorrow. Alone he grappled with the sorrow in his heart: whether the girl would be made happy by this, whether she would acquire the bold confidence never to remember what the king only wished to forget-that he was the king and she had been a lowly maiden. For if this happened, if this recollection awakened and at times, like a favored rival, took her mind away from the king, lured it into the inclosing reserve of secret sorrow, or if at times it walked past her soul as death walks across the grave--what would be the gloriousness of erotic love then! Then she would indeed have been happier if she had remained in obscurity, loved by one in a position of equality, contented in the humble hut, but boldly confident in "her love and cheerful early and late. What a rich overabundance of sorrow stands here as if ripe, almost bending under the weight of its fertility, only awaiting the time of harvest when the thought of the king will thresh all the seeds of concern out of it. For even if the girl were satisfied to become nothing, that could not satisfy the king, simply because he loved her and because it would be far harder for him to be her benefactor than to lose her. And what if she could not even understand him-for if we are going to speak loosely about the human, we may well assume an intellectual difference that makes understanding impossible. What a depth of sorrow slumbers in this unhappy erotic love! Who dares to arouse it!

The noble king, however, already saw through the difficulty; he was something of a connoisseur of human nature and saw that the girl would be essentially deceived--and one is most terribly deceived when one does not even suspect it but remains as if spellbound by a change of costume.

...the king could appear before the lowly maiden in all his splendor, could have let the sun of glory rise over her hut, shine on the spot where he appeared to her, and let her forget herself in adoring admiration. This perhaps would have satisfied the girl, but it could not satisfy the king, for he did not want his own glorification but the girl's, and his sorrow would be very grievous because she would not understand him; but for him it would be still more grievous to deceive her. In his own eyes, just to express his love incompletely would be a deception, even if no one understood him, even if reproach sought to vex his soul.

Who grasps the contradiction of this sorrow: not to disclose itself is the death of love; to disclose itself is the death of the beloved. The human mind so often aspires to might and power, and in its constant preoccupation with this thought, as if achieving it would transfigure everything, it does not suspect that there is not only joy in heaven but sorrow also: how grievous it is to have to deny the learner that to which he aspires with his whole soul and to have to deny it precisely because he is the beloved.

If, then, the unity could not be brought about by an ascent, then it must be attempted by a descent....But the lowliest of all is one who must serve others--consequently, the god will appear in the form of a servant. But this form of a servant is not something put on like the king's plebeian cloak, which just by flapping open would betray the king....but it is his true form. For this is the boundlessness of love, that in earnestness and truth and not in jest it will be to be the equal of the beloved, and it is the omnipotence of resolving love to be capable of that of which...the king...was [not] capable, which is why [his] assumed character[] is a kind of deceit.

But the form of the servant was not something put on. Therefore the god must suffer all things, endure all things, be tried in all things, hunger in the desert, thirst in his agonies, be forsaken in death, absolutely the equal of the lowliest of human beings--look, behold the man! The suffering of death is not his suffering; but his whole life is a story of suffering, and it is love that suffers, love that gives all and is itself destitute.