December 2 2014: "Because the destruction of death was being worked out" 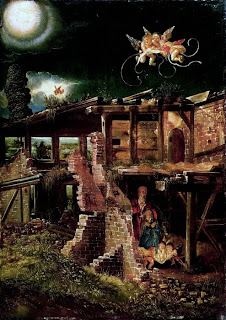 The virginity of Mary and her giving birth eluded the ruler of this age, likewise also the death of the Lord--three mysteries of a cry which were done in the stillness of God.  How then was he revealed to the aeons?

A star shone in heaven
brighter than all the stars,
and its light was ineffable,
and its novelty caused astonishment;
all the other stars
together with sun and moon
became a chorus for the star,
and it outshone them all with its light;
and there was perplexity (as to) whence (came)
this novelty (so) unlike them.
Thence was destroyed all magic,
and every bond vanished;
evil's ignorance was abolished,
the old kingdom perished,
God being revealed as human
to bring newness of eternal life,
and what had been prepared by God
had its beginning;
hence all things were disturbed
because the destruction of death was being worked out.

--Ignatius of Antioch, Letter to the Ephesians, chapter 19