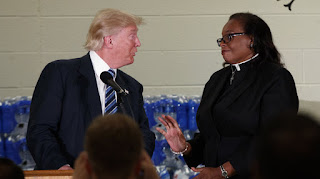 Since I brought it up, and implicitly bashed the press in doing so, it's only fair to note NPR's report on the visit of Trump to Bethel UMC in Flint, Michigan:

"Something was up," Trump told Fox and Friends on Thursday morning, calling Pastor Faith Green Timmons a "nervous mess." "I noticed she was so nervous when she introduced me. When she got up to introduce me she was so nervous, she was shaking. I said, wow, this is kind of strange. Then she came up. So she had that in mind, there's no question."
....
Pastor Timmons introduced Trump to the predominantly African-American crowd of about 50 people, and she didn't appear nervous at all.

After that, Trump shifted into a version of his now-standard stump speech, blasting free-trade deals like NAFTA, and pointing out that then-President Clinton completed the international trade deal.

As Trump began to criticize his opponent, Hillary Clinton, Timmons slowly walked back onto the stage.

"Mr. Trump, I invited you here to thank us for what we've done for Flint, not to give a political speech," she said.

That isn't true. In fact, several audience members began to heckle Trump, asking pointed questions about whether he racially discriminated against black tenants as a landlord.

And that's when Timmons — who Trump said Thursday had planned to ambush him — stepped in to defend Trump, saying the Republican nominee was "a guest of my church, and you will respect him.

The pointed questions for Trump continued as Trump wrapped up his remarks, though — and that's the moment when the press traveling with Trump was hastily escorted out of the room.

The video I have seen cuts off before any heckling occurs, or the Rev. Timmons returns to the podium to defend her guest.  What is interesting is how Trump turned heckling, which the Rev. Timmons directly addressed, into support.

Every word the man says is a lie, including "and" and "the."

I should add that, finally, a reporter says of a politician's statement:  "That isn't true."

Truly this is an age of wonders and miracles.
Posted by Rmj at 10:00 AM