Normal is as normal does 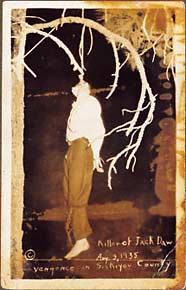 JMM sez Trump's immigration speech in Arizona was "hate speech," and he makes a good argument for it.  But then, trying to seal his argument, he (as so many do) goes overboard trying to sanitize America from its culture:


This isn't normal. It was normal in the Jim Crow South, as it was in Eastern Europe for centuries. It's not normal in America in the 21st century.

Actually, it wasn't just normal in the "Jim Crow South," unless we extend the south up to Minnesota.  Oklahoma, not even a state at the time of the Civil War, had "sundown towns," and "Tulsa" still means more than a city in that state.  Lynchings occurred throughout the Midwest; the project to collect all the photographs of lynching which were widely distributed in the early 20th century belie the idea all the racism in America had drained down to the benighted "South."  The violence in response to forced busing in Boston speaks for itself, and that was long after my own home town experienced very small scale violence (one outburst in one afternoon on one campus, which didn't even disrupt classes for all the students) over the issue of integration (and mine was a very Southern town in Texas.)

This is normal.  It was normal when George Wallace did it (JMM is too young to remember, although he knows his American history).  It was normal when Strom Thurmond did it, and Jesse Helms, and even George H.W. Bush through the offices of Lee Atwater.  It's as normal and American as baseball, hot dogs, and apple pie.  We shouldn't try to deny it, to "other" it, to hide it like we hide from the "N-word" (significantly, JMM won't use the title of Dick Gregory's autobiography in his piece, but he will use the slanderous "kike".  Hey, we were anti-semites and eugenicists before the Nazis made both of those "bad" ideas, but we were never Nazis or racists!) .   Trump's speech was hate speech; but there's nothing abnormal about that in America.

We may prefer that it is, just like we prefer no one even write the word "nigger" out where we can read it.  But wishing it were not so will not make it so.  Only facing it, acknowledging it, and calling it what it is and accepting our complicity in it, will finally heal us of it.  Reconciliation and justice start with recognition and responsibility.