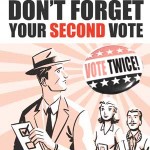 I get this via TPM, but I have to ask:  what is Stan Stanart's definition of "Voting fraudulently"?

Election workers, who will undergo training before the election, are not allowed to question the validity of the sworn statement at the polls. But after the votes are counted and the election ends, Stanart said his office will be checking to see whether a person who signed the sworn statement has a Texas Department of Public Safety-issued ID through the DPS database. If, for whatever reason, a person who actually has a license but decided to go through the trouble of lying under oath that he didn't, the voter is in trouble. Stanart says it is to ensure no one is voting fraudulently—a problem that doesn't actually exist, according to a recent analysis—but says his office won't look into the issue any further than the DPS check. (And if they really are a fraudulent voter, then Stanart says their vote will still count, criminal charges or not.)


Because saying you don't have a valid ID when you do, doesn't mean you are committing voter fraud.  It may mean you lied under oath, but perjury is not voter fraud.

Who can vote in Texas is governed by the Texas Election Code.  The relevant portion of the code for Stanart is Title 6, Chapter 63.  The portion of that title concerned with voter ID has been set aside by court order.  The only other applicable section is this one:

Sec. 63.012.  UNLAWFULLY ACCEPTING OR REFUSING TO ACCEPT VOTER.  (a)  An election officer commits an offense if the officer knowingly:
(1)  permits an ineligible voter to vote other than as provided by Section 63.011;  or
(2)  refuses to accept a person for voting whose acceptance is required by this code.
(b)  An offense under this section is a Class B misdemeanor.


No, I don't mean by this that Stanart is on the verge of committing a misdemeanor.  I mean there is no provision in the statutes for claiming a violation of the Texas Election Code by misrepresenting your ID status under oath pursuant to a Federal Court order.  This is why Stanart says he'll let the voter vote, but investigate later.  Which is a pretty clear violation of what's left of the Voting Rights Act, so I don't think the Court is going to look too kindly on these comments.

And, of course, this is just because Stanart was asked.  There are 253 more counties in Texas, each with a County Tax Assessor Collector who oversees elections, and may agree with Stan Stanart.

Or not; one is enough to violate the Voting Rights Act.

You can read the motion that brought this to the Court's attention here.  What it says doesn't make the situation sound any better; in fact, it seems to be much, much worse.  (The State's response, as represented in that motion, seems to be that, if you want to control the county officials of Texas in charge of elections, sue all 254 of them individually.)