Ladies and Gentlemen: The MOB! 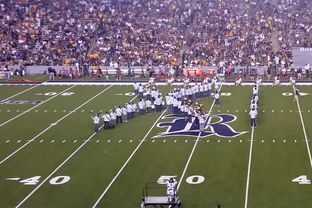 Legend has it that, the year after the SuperDome opened in New Orleans, Rice University was playing a game in the then-still functioning Astrodome, and the MOB (the "Marching Owl Band") took to the field at half-time as their announcer took over the PA system, welcoming the attendees to the world's smallest indoor stadium.

Judge Roy Hofheinz, the county judge who built the Astrodome and was as proud of it as a proud parent could be, reportedly seized the microphone and cut off the rest of the announcements meant to go along with the antics of the MOB on the field.

They're up to their old shenanigans again:

Video uploaded to social media after the event shows Rice's Marching Owl Band forming the Roman numeral IX, a reference to the Title IX ban on sexual discrimination, followed by a star and a rendition of the song "Hit the Road Jack," in reference to the departure of university president and chancellor Ken Starr in the wake of the scandal.

A representative from Baylor was not immediately available on Saturday morning for comment on the halftime performance.

Rice University's Office of Public Affairs released a statement on Saturday saying the Marching Owl Band has a tradition of satirizing Rice's football opponents with performances that are not subject to prior review by the university administration. But the statement said Rice regretted any offense to the Baylor fans at the stadium in Houston and that the band did not mean to make light of the serious ongoing issues of sexual assault.

I dunno.  I think Baylor deserved it.  And God bless the MOB!