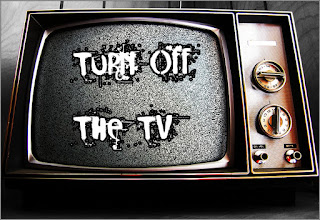 Okay, so that fantasy came crashing to the ground.

Then again, the weekend talk shows make their nut on having people on who are never challenged by the hosts, unless said guest is not an Honorable Presence in D.C., or running on the ticket of a major party (or speaking for, in any tenuous way, such a person).

Because the moment a Sunday gasbag starts treating a "guest" (and doesn't THAT term tell you all you need to know?) the way the BBC treats political leaders (the iron fist in the velvet glove of the BBC "RP"), that show dries up and blows away, having lost all reason for existing.  The only place you won't see this is PBS, where they don't have a Sunday gasbag show.

So maybe the fantasy is that we'll go back to ignoring the Sunday gasbag shows because, really, if you can't call Chris Christie a liar to his face, of what use are you?

Well, maybe if we turn off the TeeVee:

In at least five articles in the New York Times on Sept. 17, including the lead story in the print edition, the words “lie,” “false,” “falsely claimed” and “untrue” appeared in headlines, lead paragraphs, and top sections of the paper’s Trump coverage. The day before, CNN’s Jake Tapper called Trump “the most prominent pusher of the birther lie,” the Associated Press reported that Trump “peddled another lie,” and a Washington Post headline declared, “It’s time for TV news to stop playing the stooge for Donald Trump.”

It’s a marked change in language, even for outlets that have aggressively reported on Trump’s appeals to violence and bigotry. And it’s especially startling coming from the ultra-traditional Times, which even in the new digital age remains a north star for much mainstream media coverage.

“I think our investigative work—see [the Sept. 17] story on Trump’s tax breaks—has always been hard hitting,” says Dean Baquet, the New York Times’ executive editor. “But we have decided to be more direct in calling things out when a candidate actually lies.”

The shift in language coincides with Trump’s reversal on his false, five-year-old claims that president Barack Obama was born outside the US, which came with a new fabrication on the topic: that his opponent, Hillary Clinton, started the rumors about Obama’s birthplace.

Says Baquet, “The birther issue represents, well, outright lying. And he lied over a long period. It is a real word and we will use it when warranted.”

If this becomes widespread, Chuck Todd won't know whether to shit or go blind.

OTOH, don't get too excited; another entry from the "Earth:  Round or Flat?  Opinions differ" Department of "Objective" Journalism:

These are the factors that Ryan said would determine the conditions under which the word is used:

■ It is not used for matters of opinion, but only when the facts are demonstrably clear.

■ Intentionality is important — in the case of Trump and birtherism, he repeated the lie for years, in the face of overwhelming facts that disproved it, suggesting this was a deliberate attempt by Trump to deceive.

■ It is not used to police more frivolous disputes among political candidates or political factions.

“Lie” is a loaded word, all right, a favorite of campaign operatives. You score every time you can get the media to catch your opponent in one, and it’s into the bonus round if you can get them to actually call it a “lie.”

Language of any sort is among the most powerful tools in politics. Consultants are specialists in what words to use — it’s called messaging — and it’s with careful consideration that news organizations make decisions about how and when they allow reporters and editors to use particular terms. The Associated Press, in one example, continues to cause a stir after it banned the phrases “climate deniers” and “climate skeptics” from its articles last year.

“Lie” falls into this general category, especially with Trump on the scene. It’s a loaded word, but in the case of Trump and birthers it passes my smell test. The Republican nominee has propagated a bogus claim about Obama’s nationality that is meant to undermine the nation’s first black president and ignite a strange political movement. Yet it is unequivocally false and Trump knows that.


I do like the "intentionality" requirement:  we can't judge by what they say, we must examine their hearts to know if they mean to speak truth or not.  Proving fraud in civil court is a snap compared to  that requirement.  As Charlie Pierce said:  "I swear, I spent a lot of my life around Jesuits, and damned if I can figure out how thinly Ryan and Spayd have sliced the salami here."  But it almost has one side, so that's pretty good, eh?
Posted by Rmj at 4:43 PM