Our man on their side 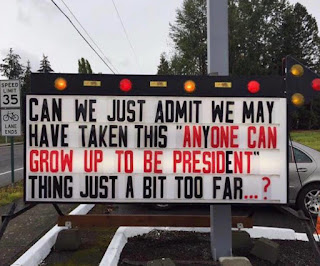 Because suddenly it needed a picture


Wow, Crooked Hillary was duped and used by my worst Miss U. Hillary floated her as an "angel" without checking her past, which is terrible!
— Donald J. Trump (@realDonaldTrump) September 30, 2016


Using Alicia M in the debate as a paragon of virtue just shows that Crooked Hillary suffers from BAD JUDGEMENT! Hillary was set up by a con.
— Donald J. Trump (@realDonaldTrump) September 30, 2016


Did Crooked Hillary help disgusting (check out sex tape and past) Alicia M become a U.S. citizen so she could use her in the debate?
— Donald J. Trump (@realDonaldTrump) September 30, 2016


One problem, among many:  there is no sex tape.

Per 538.com this morning, the likelihood of Hillary winning the election has risen to over 66%, a steady climb since Monday.  I doubt the polls are yet reflecting the impact of the debate, but there are two to go.  And he's still fuming about a beauty pageant contestant and a beauty contest from 20 years ago.

As well as the fact he was up at 4 o'clock this morning writing those tweets.  Is he on speed?

It would be irresponsible not to speculate.

I know I keep updating, but the internet is such a rich source of material: